"Anticipate" and betray in time - today Armenian nationalists are blockading the base in Gyumri, tomorrow they will shoot Russians from behind! 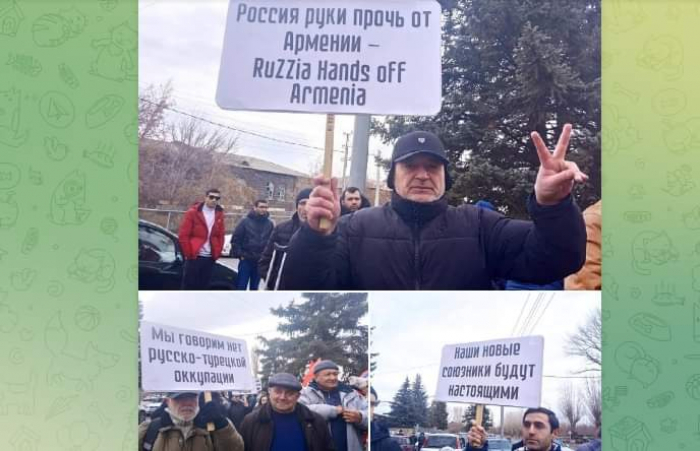 "Russia is the occupier!". It was hard to imagine such slogans in Armenia just a few years ago. But today it is a reality. Like the blockade by indignant Armenians of the Russian base in Gyumri. And that was to be expected.

Although Armenian pro-Kremlin propagandists like Margarita Simonyan hysterically assert that Russia "cannot lose the war", it has long been clear to sensible people. Russia is losing; it has no chance of even "ending the war in a draw" in Ukraine. A post-war peace, whatever it may be, will not only mean the complete de-occupation of Ukrainian lands. Russia will have to withdraw from other regions as well. Including leaving its military bases, among them the base in Gyumri, Armenia.

Since the war in Ukraine and Russia's defeat, Armenian nationalists do not want to be "allies" of a defeated Russia. Neither is there any gratitude to Russia for not only settling Armenians in foreign lands, creating Armenian statehood, feeding and protecting Armenia. The Armenian nationalists want to end up as soon as possible "in the camp of the winners", i.e. Russia's enemies and, moreover, to become "victims of the Russian occupation".

While Field Marshal General Keitel was signing the surrender of Nazi Germany in 1945, he couldn't help but wonder when he saw the French delegation among the victorious countries: "That the French are here too?". By analogy, there is every reason to assume that at the peace conference on the results of the Ukrainian war, the neighbours of the "victims of Russian aggression and occupation" will also be the "younger disciples" of the French - the Armenian nationalists. And the most interesting thing is that it is the pro-French politicians who are organising the most aggressive Russophobic activity in Armenia right now. Among them, Jirayr Sefilian's "National Democratic Pole" bloc, which organised a blockade of the Russian military base in Gyumri on January 8, 2022, is particularly notable.

"The National Democratic Polyus" blocked the Russian military base in Gyumri, thereby formally demanding the opening of the Lachin corridor. However, the blockade participants are well aware that the Russian peacekeepers in Azerbaijani Karabakh and the military base deployed in Gyumri have completely different functions. The Lachin corridor was therefore only a pretext to raise another anti-Russian wave in an already Russophobic Armenia.

The protesters' main slogan was "Russia is an occupier" and therefore they demanded the "de-occupation" of Armenia, i.e. the withdrawal of the Russian military base from Gyumri.

This seems completely illogical from the point of view of Turkophobic Armenian nationalist myths, since Armenian propaganda has been talking about the "Turkish threat" for so many years. But the thing is that Armenian nationalists understand perfectly well that Turkey will not violate Armenia's territorial integrity within internationally recognised borders. Understanding the absolute security in terms of the mythical "Turkish threat" and even more so the notorious "genocide", Armenian nationalists rush to "join the fighters against Russia" at a time when Russia's defeat in Ukraine is already obvious. "To betray in time is to anticipate" - these words of the famous French politician Talleyrand characterise the current actions of Armenian politicians in the best possible way.

This should be understood first and foremost by Russian patriots who are still deluding themselves with illusions of "alliance" and "gratitude" towards Armenia. We must be honest - Russians have shed blood for Armenian interests not only in vain, but also to their own and their country's detriment. And what is ruining Russia now is largely the fact that representatives of the Armenian lobby have been allowed into power in Moscow, which is largely responsible for the current Ukrainian catastrophe.

The Armenian nationalists, for the most part, are waiting for the moment when they can "betray" Russia in time. Simply, Zhirayr Sefilyan, whose supporters blockaded the base in Gyumri, believes that the moment has long since arrived. Nikol Pashinyan, who formally organized the "unblocking" of the base by police forces, is in fact not far from Jirayr Sefilyan. The latter, too, initially being a pro-American protégé, betrays Russia, but acts cunningly and so far tries to look like an "ally". Moscow Armenians are delaying the moment of obvious betrayal for a later date. But one thing is certain: during the Russian geopolitical catastrophe, which is fast approaching, there will not be a single Armenian nationalist in the Russian camp, although the near-Kremlin "rats" and revanchists from the "Karabakh clan" can put off "fleeing the ship" until the last moment, but sooner or later they will run. It is no coincidence that the revanchists have no particular protest against the blockade of the Gyumri base.

Surely the Russian soldiers stationed in Gyumri will still be shot at when the base is withdrawn (which is almost inevitable). After all, the Armenian nationalists will need the image of "fighting the Russian occupation" to be on a par with the "victors of Russia".