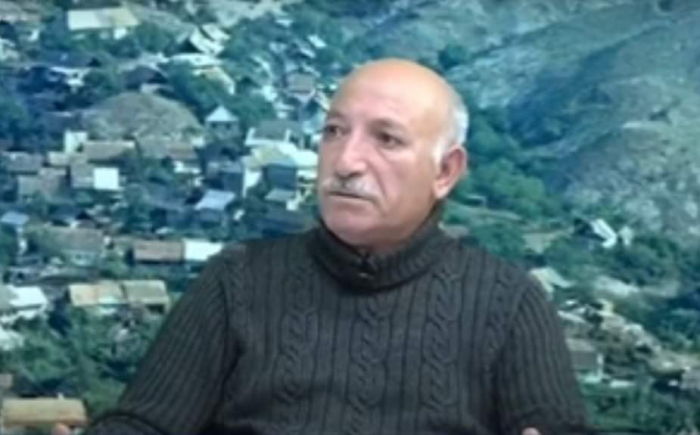 While appearing on Noyan Topan TV, the well-known Armenian radical nationalist Hrazdan Madoyan calls for sabotage of Azerbaijani oil platforms and assassination of Turkish diplomats and the presenter agrees with this:

People such as Razdan Madoyan openly promote terrorism against Azerbaijan and Turkey, and it is not only dangerous for those countries. It is equally dangerous for Georgia, through which key transit routes pass, the importance of which has recently increased dramatically. Frankly and bluntly, the goal of this terrorist "creation" (in this case, it is Armenia and its "allies" that are set on it) is to destroy the establishment of a transit, energy hub through Georgia.

Razdan Madoyan is known first of all for his wild Georgianophobia, claims on Georgian territories and support for the Armenian "Javakheti separatism" in the region of Samtskhe-Javkheti. For example, back in 2006, as one of the founders of the separatist organization Javakh, Razdan Madoyan opposed withdrawal of the Russian military base from Akhalkalaki. He clearly wanted to use the Russian military together with the separatists to separate the region from Georgia following the Karabakh scenario. He was then intimidated by the Turkish presence in the region. As he put it:

"After the final withdrawal of the Russian military base from Akhalkalaki, the Turkish military will take its place. And it makes absolutely no difference under what flag they will be stationed there".

Thereafter, Hrazdan Madoyan regularly made Georgianophobic statements and supported "Javakheti" separatism. Thus, in February 2018. Hrazdan Madoyan published an article in Golos Armenii titled "Armenian Reconquista. Towards the 30th anniversary of the beginning", where he not only praised the "Artsakh" separatists and "miatsum", but also argued that a separatist conflict should be ignited in Samtskhe Javkheti too, following the "scenario" implemented in relation to Azerbaijani Karabakh.

Justifying the Armenian claims against Georgia and Azerbaijan, he wrote that "the Soviet authorities defined the borders of the three national republics and expectedly cut off everything possible from Armenia in favour of Georgia and Azerbaijan: Javakhk, northern Lori, Nakhijevan and the right bank of the Kura, in effect driving us into a reservation".

The same year he published another Georgianophobic article, How Turkey facilitated the transfer of Javakhk to Georgia ( http://www.yerkramas.org/article/138140/kak-turciya-sodejstvovala-peredache-dzhavaxka-gruzii), where, along with historical slander against Georgia, the Georgians and even accusing them of the "Armenian genocide", he also made claims to Georgian lands. Here are some passages from this material: "...Aresh. This is not Western Armenia. It is Transcaucasia, the middle course of the Kura, Nukhi-Aresh, a region at the junction of the borders of present-day Georgia and Azerbaijan. Its Armenian population was also exterminated, but by the Transcaucasian Turks, with the active assistance of the Georgians in 1918.

In late 1917 the Turks entered Javakhk with the tacit consent of the Georgians, who also dreamed of seeing Javakhk without Armenians. The Armenians of Akhaltsikhe region headed by Z. Zoryan managed to organize themselves, put up defence and all attempts of the Turks (assisted also by local Meskhetian Turks) to break the resistance and destroy Armenians were fruitless. The population of the villages of Tamala, Satkha, Kartsakh resisted stubbornly in the Akhalkalaki district, which enabled the rest to escape over the mountain passes into Georgia, where the government of the Democratic Republic of Georgia drove them into concentration camps. After the occupation ended, barely half of the 80,000 population returned to their looted homes. As they still say in Javakhk: 'There are two Armenian graves under every tree in the Bakuryan pass'. ....

For the second time, the Turks, already Kemalists, occupied "Javakhk" in 1920. After the Sovietisation of Armenia, they began to withdraw their troops from its territory (Shirak and Javakhk) via Alexandropol and were immediately followed by the Georgians. When the Turks left Alexandropol and Armenian border troops were sent to Javakhk, they were met by Georgians near the village of Troitskoye in the former Bogdanov district of Georgia (at the present border), claiming their historical and geopolitical right to the region. Armenia had already been deprived of its right to independent politics; everything was decided by Moscow. After the Sovietization of Georgia, Moscow decided that "Javakhk" would be given to it. The Bolsheviks did not care about the protests of the population. Stalin was a Georgian, and Turks, like now, were warm friends of Russia to whom they used to send money and bread, when their own were starving to death by tens of thousands. Exactly one week after Karabakh (Artsakh) was handed over to the Transcaucasian Turks, Javakhk was given to the Georgians with the same Jesuit wording: 'due to economic expediency'...

The Turks were rejoicing. Their plan had come to fruition, or was close to coming to fruition. "They failed to take Javakhk, but neither did Armenia: it was given to Georgia, which meant that the Turks could also use it (as it later turned out), the Armenians of Nukhi Aresh were slaughtered by joint efforts - a northern corridor bypassing Armenia to connect with Azerbaijan, created by the Bolsheviks, became a reality...".

Obviously, for Armenian nationalists such as Hrazdan Madoyan, Georgia is clearly a hostile country and they simply dream of aggression against Georgia and its partition.  At the same time, the likes of Madoyan oppose Georgian-Azerbaijani and Georgian-Turkish cooperation:

"...Then the USSR collapsed, Georgia, Armenia and Azerbaijan became independent states, Georgians immediately switched to the Turks according to their national tradition (the sun of Georgia now rises not in the north but in the south and west), Russian President B. N. Yeltsin, aptly nicknamed by his own people YBN (this is not what you think. N. Yeltsin, aptly nicknamed by his own people YBN (it is not what you think), in a drunken rage promised to withdraw the Russian base from Akhalkalaki, which is now replaced by the Turks; went to meet his partisan boss H. Aliyev and stopped the Armenian troops, preventing us from reaching the Kura. Eventually Azerbaijan became an oil and gas king who considers itself equal to Russia, Georgia became a transit country for Azerbaijani hydrocarbons, a rolling railway from Turkey to Azerbaijan was laid through 'Javakhk'...". – wrote back in 2018 Hrazdan Madoyan.

Now Hrazdan Madoyan and similar inspirers of terror, directly call for terrorist acts against Azerbaijan and Turkey. Given his hatred towards Georgia and his support for "Javakhi" separatism, as well as his clearly hostile attitude towards transit through Georgia - these statements are also directed against Georgia.