Here is what treachery looks like: ""The great Russian patriot" Sarkis Tsaturyan invites US and NATO troops to take the place of Russian peacekeepers 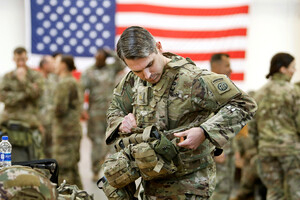 Let us recall that one of the main formal reasons for the current Russian aggression against Ukraine was Ukraine's intention to join NATO and "the prospect of NATO troops appearing near Russia's borders". Moreover, Russian "patriots" of Armenian nationality, starting from the head of the Russian Foreign Ministry Sergey Lavrov-Kalantarov and ending with propagandists like Margarita Simonyan, Tigran Keosayan, Semen Bagdasarov, Sarkis Tsaturyan and a dozen others, were most indignant about this prospect.

However, how would the Russian people react if they learned that those who were so indignant at the prospect of American bases and NATO troops in Ukraine and fomented war would themselves propose to introduce American and NATO troops in another post-Soviet republic? Namely, to Azerbaijan, to the territory of Karabakh in Azerbaijan, where Russian servicemen are currently on a peacekeeping mission. Their "great Russian patriots" propose to replace them with French and American troops. What is this but betrayal and the work of double agents for the very same USA and France, which are known to be key NATO countries?

This is after Russia, following the lead of such ideologues and propagandists, unleashed a fratricidal war with the closest people, Ukrainians, formally to prevent such bases and troops at its south-western borders. And here, the same "Russian patriots" propose such troops and bases near the southern borders. The same editor-in-chief of the Realist news agency, Sarkis Tsaturyan, told how to "end the blockade of 'Artsakh' by calling on the US and French military and opening the way to international recognition of the 'Armenian republic'".

Obviously, Sarkis Tsaturyan is no "patriot of Russia", although he earns quite a bit of money there; he is just an ordinary Armenian nationalist.

In principle, pro-Western Armenian nationalists (who simultaneously hate and curse Russia with the last words) demand introduction of French and American "peacekeepers" to Karabakh. But Sarkis Tsaturyan, judging by the materials of his "Realist" news agency, is not only a "patriot of Russia" but also an enemy of the West and "American imperialism".

And now this "patriot", like the last "Westerners" in Yerevan, also demands to introduce American troops in place of Russian ones. And, judging by his logic, not only to Karabakh, but, in the future, to Gyumri too. And all this to protect the interests of Armenians, or rather Armenian nationalists and "Artsakh" separatists, as Russia is not able to cope with such protection.

I would like to ask Sarkis Tsaturyan whether representatives of "the most ancient and long-suffering people" live not only in the Republic of Armenia and Azerbaijani Karabakh. They live in Moscow too. And the probability of being attacked by skinheads or robbers in the Moscow suburbs and "bedroom" districts is much higher for them than the same risk in Karabakh. So, after that, should American and French troops be sent to Moscow? It turns out that "protection of Armenians" and their exorbitant nationalist ambitions is the "highest value" for which Russia as a power must sacrifice all its geopolitical interests?