The "Ecocide" of Karabakh by the separatists affects environmental security in Kvemo Kartli, in Georgia. 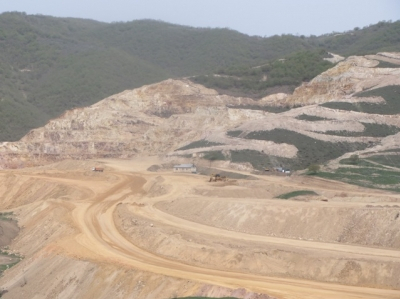 For some reason, the legitimate demands of the Ministry of Ecology and Natural Resources of Azerbaijan and the Azerbaijani public for environmental monitoring of the separatists' illegal extraction of natural resources on Azerbaijani territory, in particular the Gizilbulag (Drobon) and Demerli (Kashen) fields, are accused by Armenian nationalists of allegedly "attempting to genocide the Armenian population of Karabakh". (Soon, the haymaking by returning refugees in Karabakh will also be interpreted by them as "genocide".) But the illegal exploitation of mines in Karabakh, organized by separatists without observance of elementary ecological norms, leads to real ecocide in Karabakh and harmful influence on people living in the area of mines exploited by separatists. The Armenian specialists themselves wrote about this in their time and raised the issue of the environmental hazards of the production process.

Armine Narinyan wrote about this back in 2013, when the predatory development of the Demerli deposit (Armenians call it "Kashen") was just beginning. "Residents are concerned about the Kashen open pit mine". (https://www.ecolur.org/ru/news/mining/4802/ ).

«Is Kashen mine located in Nagorno Karabagh Republic already operating? The people living in sanitary zone have been moved into a temporary dwelling. They were promised to be given a new one. The project submitted “Vallex Group” Company was approved in June 2013. The company promised to invest 80 million USD in this project.

17 million tons of ore will be processed in the first 10 years with 1.6 million tons per year. This mine will be dealt by Base Metals Company, a part of Vallex Group Company. Base Metals Company will deal with the extraction and processing of ore from Drmbon copper-gold mine. Nearby you can find Vardadzor, Chankatagh, Nerqin Khoratagh, Tsaghkashen and Kusapat villages. Many people from Vardadzor village are displeased with this project, they are concerned that the open mine will influence on their health and cause damage to environment. “The young people leave village, those who received compensation move to Mardakert…” say villager A. A. The sanitary zone makes up 500 meters, which villagers assess as insufficient.

The authorities assure that Kashen mine development will bring large benefits and will promote the economic growth of the country». The end.

In the early days of the Demerli mine (Kashen), the local Armenian population was already suffering from its activities. However, after the first publications, the separatists stopped even allowing Armenian environmentalists into the mines, and the locals were intimidated by them and simply afraid to complain to anyone.

Since then almost a decade has passed, during which the occupiers and separatists have been plundering the subsoil of Azerbaijan with no concern for either the environment or the health of the local population. Many Karabakh Armenians died prematurely, others suffered irreparable damage to their health, dozens of families were displaced, lost their lands in an environmental disaster created by the separatists and looters. I.e. there is a real "ecocide" and squeezing Armenians out of their places of residence. And it was organized by the same separatists who allegedly "protect Karabakh Armenians from genocide".

Moreover, ore from the Demerli (Kashen) and Gizilbulag (Drobon) mines is exported to Armenia to the Alaverdi copper smelter, owned by the same Vallex Group, where it is subjected to metallurgical processing and from there, copper, gold and other metals, already smelted from stolen raw materials, are exported.

This mill is an environmental disaster zone (with the highest cancer rates in the Republic of Armenia for the population living in the vicinity), which, until 2018, the Karabakh clan that ruled Armenia turned a blind eye. With the change of government in Armenia in 2018, Pashinian's government finally decided to address the issue of an environmental disaster organised by the Vallex Group. After several inspections, the Alaverdi copper smelter was fined RD$380 million ($700,000) for violating environmental regulations. It was also legally obliged to reduce sulphur dioxide emissions if it continued to operate. But the plant failed to meet this requirement because of obsolete equipment.

It turns out that not only Armenians of Karabakh, but also Armenians of the Republic of Armenia itself suffer from the activities of Vallex Group. Given the fact that the Alaverdi copper smelter is located close to the border with Georgia and discharges toxic waste into the Debed River, which runs through the Kvemo Kartli region of Georgia and flows into the Kura River, Georgia's ecology is directly harmed!

Thus, the government and the ministries of ecology and natural resources of Azerbaijan are doing on their territory what the government and the relevant environmental protection agency of the Republic of Armenia are doing on theirs - trying to put an end to the environmental mayhem campaign that is ruining Armenians in Karabakh and in the Republic of Armenia itself, whose harm "reaches" into Georgia as well.