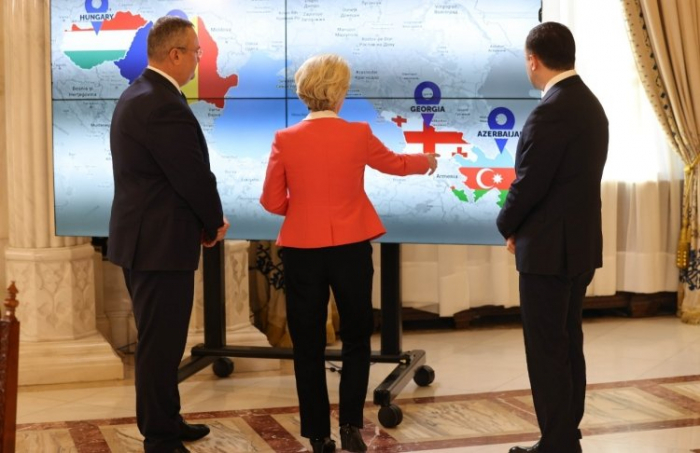 The quadripartite intergovernmental agreement foresees the implementation of a submarine cable project between Romania and Azerbaijan via Georgia and the Black Sea for the transportation of electricity from renewable energy sources (including the electricity produced by hydropower plants). The submarine electricity transmission cable project across the Black Sea is part of the energy agreement between the European Commission and the Republic of Azerbaijan, and at the same time is a flagship project for Georgia under the EU Global Gate strategy.

"Today we are starting the construction of another energy bridge from Azerbaijan to Europe, our countries intend to become reliable suppliers to Europe, and it is mainly about green energy. Azerbaijan's renewable energy potential is more than 27 gigawatts (GW) - this is solar and hydropower, as well as wind energy from the Caspian Sea... So, in the first phase, Azerbaijan's exports will be at least 3 GW. In order for these targets to be achieved, we need to work efficiently. Azerbaijan, Georgia, Romania and Hungary should work as a team and cooperate closely with the European Union. I wish us all success", said President of Azerbaijan Ilham Aliyev during the signing ceremony.

At the same time Ursula von der Leyen emphasized that "the Black Sea submarine power cable will be a new transmission line and a window of new opportunities. This project will give us and Georgia a European destination and it will bring a lot of benefits. It will turn Georgia into an electricity hub and it will improve the domestic energy market. Ultimately, the Black Sea submarine power cable will help our neighbours in Moldova and the Western Balkans, and of course, Ukraine. It will help the country in reproduction and reconstruction."

To understand the enormous significance of this cable for both the South Caucasus and EU countries, it is enough to mention that the time zone difference between the South Caucasus and Eastern Europe is 3 hours. This means that when it is midnight in Azerbaijan and Georgia - Bucharest, Budapest, Vienna and other European capitals are still at 9 PM and there is a daily "peak" consumption of electricity. And instead of generating it locally, it is much more profitable and efficient to provide power from where the "peak" has already passed, but there is the capacity to increase generation.

The second significant advantage of this cable is that Georgian electricity generated by hydropower plants will be delivered to the EU through it. Which, unlike thermal power plants and nuclear power plants, can regulate their capacity very flexibly, as hydro power plants are used to smooth out "peak" loads by running their turbines when there is an increased demand for electricity.

Given this, it becomes clear how the Namakhvan HPP on the Rioni River could be of help to Georgia as an energy hub. Unfortunately, the emotions of the public, cleverly "heated" by certain outside forces, prevailed over the economic arguments. As a result, the construction of a large hydropower plant in Georgia was suspended in September 2021 and the Turkish company ENKA announced its withdrawal from the Namakhvani HPP project.

However, the war in Ukraine and Russian strikes on the Ukrainian energy infrastructure have once again raised the issue of the need for additional energy-generating capacity. It is unlikely that today, against the backdrop of Russian strikes causing millions of Ukrainians to sit without electricity, the organisers of protests in Georgia against the construction of the Namakhvani HPP could "convince" citizens that they and other countries (the same Ukraine) allegedly "do not need" additional electricity. All the more so when the largest of Georgia's currently operating HPPs, the Inguri HPP, is in fact "held hostage" by the Russian occupiers, who control that part of its equipment located in occupied Abkhazia.

Of the remaining Georgian hydropower plants, a significant portion are owned by Russian investors (linked, like all big business in Russia, to the Kremlin). There is a risk that these too could be shut down by the owners at the most critical moment. Therefore, additional non-controlled energy capacities that are not connected with the occupying country Georgia is extremely necessary.

Of course, it is possible to re-negotiate with an investor to resume the construction of Namakhvani HPP after an environmental impact assessment and possible improvement of the project in the direction of reducing the environmental impact. But the image of Georgia as a country, in which foreign investments are protected, has already been damaged by the story of the Namakhvan HPP. Georgia's weight and role in the project of the Black Sea Submarine Power Cable would have been much greater if the construction of the Namakhvani HPP, which is so necessary not only for Georgia, but for Europe and Ukraine as well.