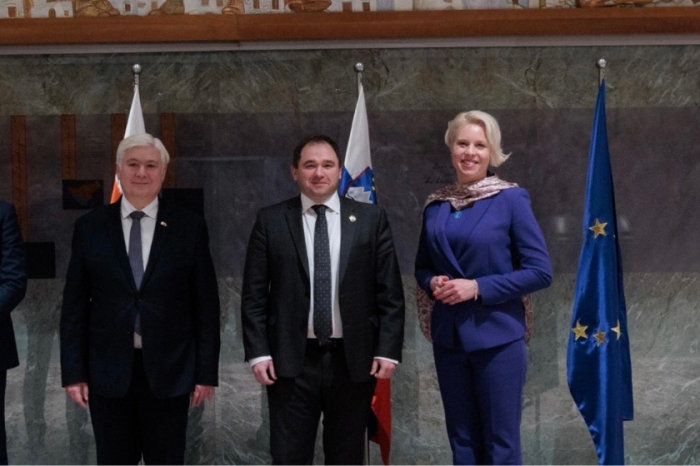 The Foreign Relations Committee Delegation, headed by Nikoloz Samkharadze serves the official visit to Slovenia. Today, the Committee members held a meeting with the President of the National Assembly of Slovenia, Urška Klakočar Zupančič.

According to the Parliament’s press office, the sides deliberated on the enhancement of parliamentary ties, the EU integration of Georgia, the grave situation on the occupied territories of Georgia, and the Russian aggression in Ukraine.

Mrs. Zupančič affirmed that Slovenia supports the granting of the EU candidate status to Georgia and noted that support of Georgia by the EU member states is crucial. As Mrs. Zupančič pledged, Slovenia spares no efforts to facilitate Georgia in receiving the EU candidacy in 2023. The sides underlined the necessity of the enhancement of parliamentary ties against the background of close bilateral relations and agreed on further cooperation in this direction with the facilitation of the visit of Mrs. Zupančič to Georgia scheduled in 2023.

Georgian MPs, during their visit, also held meetings with the Chairs of the Foreign Policy, European Affairs, and the Defense Committees of the Slovenian Parliament and discussed the war in Ukraine, the security milieu in the Black Sea and the South Caucasus region, occupation of the Georgian territories by Georgia, compliance with the EU recommendations, Georgia-NATO relations and bilateral trade-economic ties.

Samkharadze touched upon the process of the fulfillment of the EU 12-point plan and introduced further plans, as well as dwelt on the situation in the region and the role of Georgia in facilitating peace and stability in the South Caucasus region. The sides overviewed the aspects of cooperation in the defense and security sphere.

“Today, we held truly interesting meetings in the Parliament of Slovenia and held subject considerations of the directions most crucial for Georgia. It is our first official visit to Slovenia, which in my belief, will have an essential effect on our further cooperation. The executive and legislative authorities of Slovenia manifested full consensus on the fact that Georgia deserves the EU candidacy. Slovenia intends to further support us on this path and I do hope that backed by Slovenia and other partners, the EU will make a proper and fair decision in 2023 and will grant the EU candidate status to Georgia”, Samkharadze stated.