Separatist mines on the New Silk Road and their "clearance" 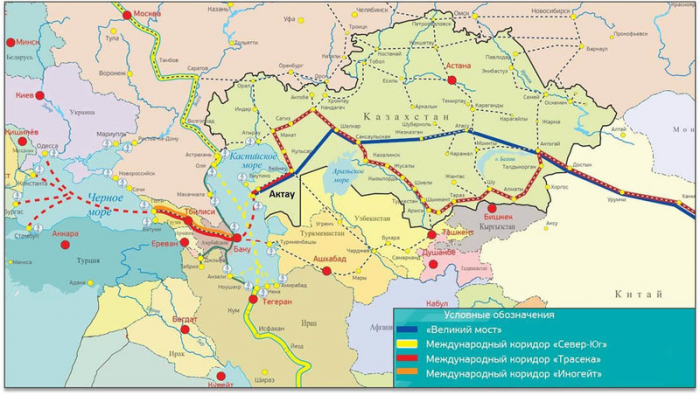 "The middle corridor" - a route through the Caspian Sea, Azerbaijan, Georgia and Turkey to Europe - is the shortest route, and the countries along it initially had tremendous prospects for sovereign development. Today, a new trans-Eurasian route for the transit of goods from China to Europe through the South Caucasus has proven to be in demand for the world economy and awareness of the prospects and importance of this route is growing exponentially. So is the difficulty of total control over this route, even by superpowers claiming global hegemony.

Unfortunately, "mines" have been laid along the route of the "Middle Corridor" by certain forces in the form of separatist projects - "Artsakh", Abkhazia and Tskhivali, etc. There are attempts to ignite new separatist and local wars.

In principle, separatist projects, with redrawing of borders, have been tried and eventually launched in other parts of the post-Soviet space (Transnistria, Crimea, Donbass). But at the beginning of the 1990s, the greatest "density" of separatist projects and their greatest "bloodiness" were organized precisely in the South Caucasus, on the territory of Azerbaijan and Georgia.  Several other "sleeper cells" of potential separatism were also formed at the same time. In particular, the project of "Javakhk" separatism in the Georgian region of Samtskhe-Javakheti.

The " mines" of potential conflict and separatism in Central Asia were laid. In Central Asia, unlike in the South Caucasus, where 3 such 'mines' (Karabakh, Abkhazia, Tskhinvali region,) detonated in the early 1990s, similar wars are being attempted now. We are talking about the following regions:

1. Karakalpakstan, an integral part of Uzbekistan with autonomous status, where riots were organised in the summer of 2022 with outside interference. Karakalpakstan is uniquely situated, bordering Kazakhstan on one side and Turkmenistan on the other, and instability in this autonomy could spill over to both states, effectively 'blocking' the Central Asian corridor. Fortunately, the Uzbek authorities have managed to nip in the bud attempts at separatist destabilisation.

2. The Kyrgyzstan-Tajikistan border in the Ferghana Valley region. The Soviet authorities artificially created 'national-state delimitation' here by organising numerous enclaves of neighbouring republics within the Kyrgyz SSR. And it would be naïve to believe that those forces who organised the separatist conflicts in the South Caucasus and elsewhere, raising the issue of supposedly "disputed borders", would not attempt to plant a "time bomb" here too. They tried to "blow it up" in 2022 by provoking a border military clash between Tajikistan and Kyrgyzstan. And this happened at a time when the issue of transit along the New Silk Road and the "Middle East Corridor" through Central Asia became particularly urgent.

3. Kazakhstan. Here, back in January 2022, before the Russian aggression in Ukraine, against the backdrop of unrest, certain forces tried to foment separatism in ethnic Russian-populated Kazakh regions, particularly in Northern Kazakhstan. Moreover, the issue of allegedly "native Russian lands" in Kazakhstan was provocatively raised by representatives of the same Armenian lobby, which previously supported "Artsakh" and other separatist projects in the South Caucasus, and since February 2022 are the main proponents of the Russian aggression against Ukraine. And recently by the same forces a new propaganda wave about alleged "infringement of rights of Russians in Kazakhstan" has started. Although that propaganda is at odds with the reality that thousands of Russians are fleeing to Kazakhstan from total mobilization and being acquitted as "cannon fodder" to Ukraine.

Initially it was assumed that small countries such as Azerbaijan or Georgia simply do not have enough strength to independently "clear" the "middle corridor" and end the occupation of their territories and put an end to separatism.  This means that transit flows, despite their profitability and demand for the global economy, will bypass these countries, enriching other geopolitical players.

All the more so because certain forces have obstructed even obviously necessary projects, such as the Baku-Tbilisi-Ceyhan oil pipeline and the Baku-Tbilisi-Kars railway.  There was no shortage of "scare stories" regarding the oil pipeline, which runs in the immediate vicinity of the then Armenian-occupied Karabakh Azerbaijani lands. Paid "experts" frightened that in case of a new war in Karabakh between Azerbaijan and Armenia, this pipeline would be destroyed by Armenian aggressors.

It was the same with the Baku-Tbilisi-Kars railway. In addition to threats from Armenian occupants in Karabakh, the railway was opposed by a "sleeper separatist hotbed in Georgia's Samtskhe-Javakheti. Armenian 'Javakheti' separatists threatened to sabotage the railway and opposition to the project was organised by the international Armenian lobby. The Baku-Tbilisi-Kars railway managed, firstly, to be launched with "identification" compared to the initial plans, and secondly, even after the launch of this railway there was no shortage of clearly commissioned "expert assessments" regarding the "uselessness" of the railway.

Today, after Russia's aggression in Ukraine, the Baku-Tbilisi-Kars railway is fully loaded and it is important to increase its capacity. Azerbaijani President Ilham Aliyev, speaking at the international conference "Along the Middle Corridor: Geopolitics, Security and Economy", said: "Five years ago we announced the opening of the Baku-Tbilisi-Kars railway project together with our partners. And now, seeing the increasing volumes of cargo passing through our country, we have started investing in the expansion of the Georgian section of Baku-Tbilisi-Kars. This project will cost us more than $100 million, and we plan to complete it in a year or maybe a year and a half.

But even expanding the capacity of the Baku-Tbilisi-Kars highway will not solve the problem of increasing transit flows. What is needed is a parallel route in the same 'middle corridor', namely a full-fledged road leading from the main territory of Azerbaijan to Nakhichevan and on to Turkey, via the Zangezur corridor. However, there are forces interested in instability on this way, the hotbed of Armenian separatism is still smoldering, and Armenia is in no hurry to sign a peace treaty on the basis of recognition of internationally recognized borders by the parties and fulfillment of obligations to unblock the Zangezur corridor. Armenian nationalists, fulfilling external "orders" to destabilize the region, will claim new and new territories of their neighbours at any concessions. Not to mention the fomenting of new separatist conflicts by them. After all, it is no secret that the Abkhazian and Transnistrian separatist projects, as well as separatism in the Ukrainian Donbass were most actively supported by the Armenian lobby in the Russian Federation.