In Abkhazia, young politicians are uniting to oppose the occupiers and Armenian aliens. But this is unrealistic without de-occupation! 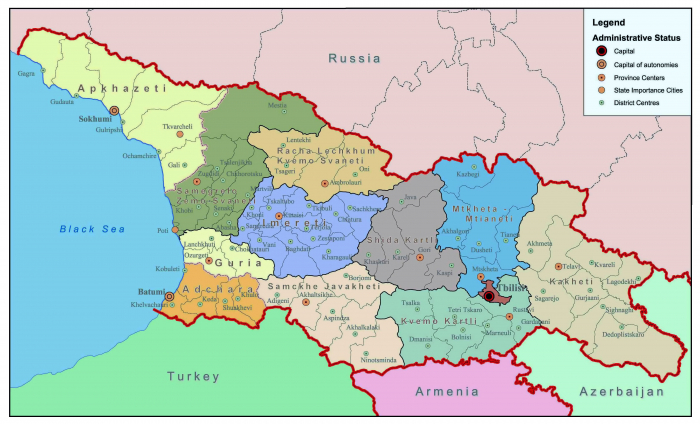 On November 23rd, 2022 a congress of the new civil association "Assembly of Social and Political Forces" was held in Sukhumi. The opposition politicians and public figures gathered together were united by their rejection of the policy of the occupants and their puppets to hand over the Abkhazian lands (in particular, Pitsunda) to Russia, and their desire to suppress any public discontent by registering non-governmental organisations as "foreign agents".

It is clear that those gathered could not openly criticise Russia that occupied Abkhazia and the separatist project of fake "independence of Abkhazia" as such. However, the Georgianophobia that is usually inherent in all Abkhazian congresses was surprisingly moderate here and was limited to general phrases. In fact, the young Abkhaz politicians were beginning to realise that it is not Georgia that is questioning the future of their people, but quite different forces.

The leader of the Abkhazian people's movement NGO Adgur Ardzinba, who recently made a bold statement regarding the dubious acquisition of separatist "citizenship" by Armenian criminal mastermind Ruben Tatulyan, was also present at the congress. He stressed that the congress brought together young politicians of Abkhazia. And if until recently he was the youngest speaker at such congresses, now he is probably the oldest.

This is very symbolic, since the congress was organized by young Abkhazians themselves, who are not burdened by murder of their Georgian brothers, looting and other crimes. Although there were many children of separatist veterans of the 1992-1993 war among them, they were clearly disappointed with how their fathers handled the results of the war ...

Of course, in the conditions of the occupation of Abkhazia, in order not to be accused of "working for Georgia", participants of the congress had to talk about the organizers of the Abkhazian separatist project, the same Vladislav Ardzinba, in a positive light. At the same time they gave an unambiguous diagnosis - the current separatist government is hopelessly rotten. The same Adgur Ardzinba stated the following:

" That system, which was enthusiastically created by Vladislav Ardzinba and his companions, when they found themselves in the hands of, let's face it, not the best remnants of the Soviet nomenclature, with an autonomous republic mentality, is rotten to the core. I cannot give you, dear fellow citizens, a single example in the world of a successful state that is based on intrigue, corruption, nepotism, when social lifts are not working, when a simple peasant who has even tremendous intellectual ability, has no chance to break through to the top ...

However, clever Abkhazians are well aware that Vladislav Ardzinba with his associates is the same Soviet nomenclature. And to speculate about how "better" remains of it are preferable to "not better" is like sorting out types of waste from the same sewer.

Adgur Ardzinba finished his big speech with the following words: "Abkhazia will revive. As they say, there is no darkness more gloomy than darkness before dawn. Here we can fully agree with Adgur Ardzinba. But though in his speech Adgur Ardzinba was critical of Georgian public figures, proving unreality of life of Abkhazians outside Georgia.  Sooner or later Abkhazian politicians will have to agree that Abkhazia will rise in united Georgia, together with the brotherly Georgian people!

Interestingly, in contrast to the "official" events of the separatist authorities, where every statement "required" support for the so-called "special military operation", or rather Russia's aggression against Ukraine, the young Abkhazian politicians have tried their best to avoid this issue. And it is clear why, in fact, the Kremlin has already decided to throw all Abkhazian youth "to the slaughter" in Ukraine. So the subject of the war in Ukraine is simply frightening for Abkhazians, they are even afraid to talk about it once and for all.

So far, genocide of Abkhazian youth has been postponed only by the onset of cold weather and winter. Even the occupants understand that under conditions of freezing temperatures in the Ukrainian steppes there will be no special benefit from "cannon fodder" from Abkhazia unused to this situation - just unnecessary fuss with frostbitten and frozen.

Yet in Russia, according to some reports, a new wave of total mobilisation for the war in Ukraine is being prepared, where instructions have been given to send primarily national minorities and "non-Russian" peoples. Ossetians and Abkhazians with Russian citizenship definitely fall into this category.  For the new wave of mobilization in Russia which is scheduled for early 2023 the separatists in Sukhumi were ordered to carry out "mobilization operations" in advance so that when mobilization is officially announced in the occupied Abkhazia no one will be able to avoid being sent to certain death in Ukraine. And in place of Abkhazians "condemned" to be sent to Ukraine it is already planned to settle new settlers in Abkhazia.

To oppose this genocide scenario of the Abkhazian people young Abkhazian politicians need to urgently unite and begin a real fight against the occupants and aliens, urgently seek ways of reconciliation with the brotherly Georgian people and restoration of the Georgian unity. Only reintegration of Abkhazia and Georgia into a single state will save the Abkhazian people from genocide.