Will Putin's motorcade pass through the street of Nazi criminal Garegin Nzhdeh? 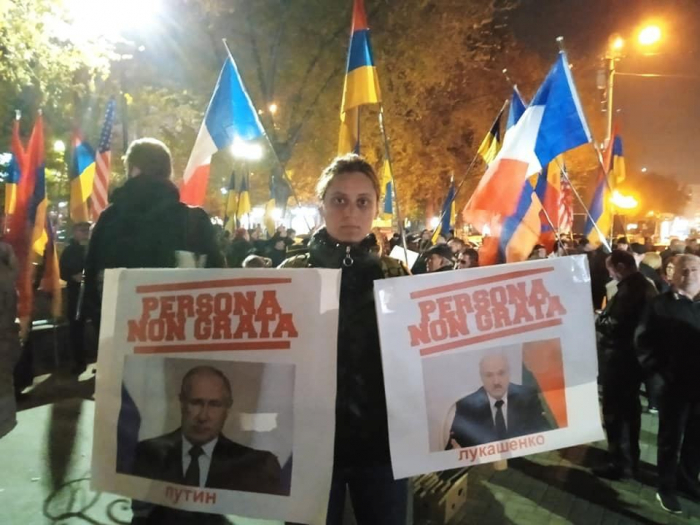 On 23 November 2022, the heads of CSTO states flocked to Yerevan for a summit. The attitude of Armenians to the CSTO and to the main country of the bloc, Russia, was very eloquently demonstrated by the Armenian public. On the eve of the summit a mass anti-Russian protest was held in the centre of Yerevan, formally organised by the National Democratic Pole Party.

However, the real "permission" for the action against the CSTO and Russia, all the informational support was given by the current government of Nikol Pashinyan. Thus, it seems to be "working off" the theatrical tears of Nancy Pelosi, Speaker of the US House of Representatives, shed by her at the memorial of the mythical "genocide".

Participants in the procession, which began very symbolically at the pompous monument to the Nazi criminal Garegin Nzhdeh, installed during the rule of "Russia's great friend" Serzh Sargsyan, chanted anti-Russian slogans: "enemy Russia!", "enemy of the CSTO! The speakers protested against the visit of Vladimir Putin, the leader of Russia, "hostile towards Armenia", and demanded Armenia's withdrawal from the CSTO and the withdrawal of the Russian military base from Gyumri.

In other words, Russia is already an enemy for Armenians. The Armenian government, therefore, treats Russia as an enemy which not only can, but must, be used to its own advantage, robbed, deceived and betrayed. Meanwhile, it is now that Russia and the authorities need more than ever, however symbolically, the support of those they regarded as their "friends and allies".

All the more that it is thanks to the efforts of these "friends" who have staked their support on separatism and redrawing of borders everywhere in the post-Soviet space that Russia found itself in the current disastrous situation. It is by the efforts of the Armenian lobby that it got involved in a bloody war against Ukraine in which it suffers defeat after defeat and is rapidly descending from the position of "second superpower" to the rank of world outcasts.

But, at the same time, no one supports such "bellicose" sentiments in Russia as the Armenian lobby and Armenian propaganda. Margarita Simonyan, Tigran Keosayan, Semyon Baghdasarov, Armen Gasparyan, Aram Gabrilyanov and pro-Armenian mutts like Semyon Pegov do not want to hear anything about peace with Ukraine and de-occupation of Ukrainian lands, calling for "war until the victorious end" at any price. Including at the cost of a world nuclear war. In other words, the supposedly "pro-Russian" Armenians are maniacally pushing Russia to its doom. Although Russia's real friends would try to minimise the catastrophe before it is too late and would do everything to get Russia to stop its murderous war in Ukraine.

On the other hand, the Armenians in Yerevan and the majority of the Western Armenian diaspora are aggressively anti-Russian. They accuse Russia of all the deadly sins, and not in relation to anyone, but to Armenia and the Armenians. Although Russia created Armenia by settling Armenians in foreign lands, it is in fact destroying its statehood for Armenian nationalist interests. Is it a paradox? Not at all!

Armenian nationalism and the "Armenian project" in general was a purely "Western" invention orchestrated by Russia's enemies. However, they managed to ensure that it was Russia which shed blood for this project, subsidised and supported it in every way it could, to the detriment of its own interests. Naively hoping for reciprocal "gratitude".

But there will be no gratitude. Because Armenian nationalism and the Armenian project in general was launched precisely to destroy Russia. Or, at the very least, to make all its sacrifices "in the south-western direction" all its imperial ambitions, to be in vain and "nullified".

Russia is already a waste of material for Armenian nationalists. They don't need it. The Armenian nationalists in Moscow and in the Russian Federation in general are simply hoping for the last, under the cover of "Russian patriotism" slogans, to snatch pieces from the collapse of Russia (the Krasnodar Territory and Sochi) and from what Russia has managed over the years to take away from its neighbours - the same Abkhazia in Georgia - for Armenians.

Well, the "pro-Western" Armenian nationalists hope to "return home" together with Armenia. That is, to the West. Hoping that the new masters will provide them with a "reward" for their successful "mission" of bringing Russia to ruin. At the expense of the same Azerbaijani, Georgian and Turkish lands.