Istanbul Explosion. Ankara believes it was carried out by Kurdish separatist terrorists from the Kurdistan Workers' Party and the Democratic Union Party (PYD) 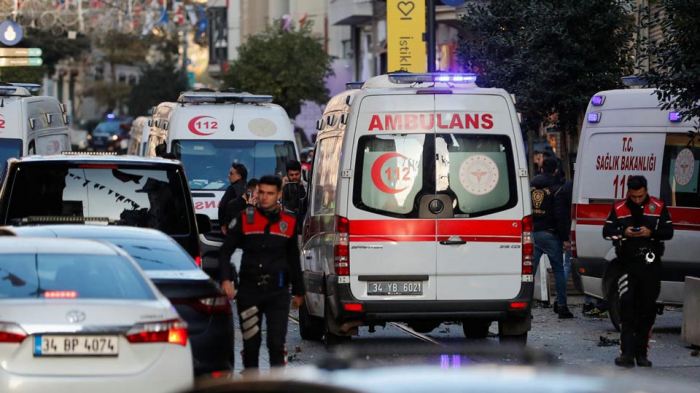 The terrorist and separatist "Kurdistan Workers' Party" (PKK), the timing and circumstances of the November 13, 2022 terrorist attack in Istanbul once again demonstrated that a dangerous informal geopolitical "alliance" is forming in the South-East Europe, Middle East and South Caucasus region, which could blow up these regions with a new "big war".

An explosion in Istanbul took place exactly seven years after the series of terrorist attacks in Paris on 13 November 2015. At that time, several attacks took place almost simultaneously: the bombings near the Stade de France stadium, the shooting of visitors to several restaurants, and the massacre at the Bataclan concert hall, where around 100 people were taken hostage. There were 130 victims and more than 350 injured. ISIS claimed responsibility for the attacks at the time, ambiguously calling them "September 11 the French way".

As you know, formally the terrorist ISIS "sort of" feuds with another terrorist organisation, the PKK. But this feud is a bit "strange"; along with the fighting between the two groups" for the division of spheres of influence, there have been repeated cases where ISIS fighters were "ferried" to "safe places" through the PKK-controlled area in the same Syria.

Remembering the anniversary of the attacks in France, French President Emmanuel Macron offered his condolences to Turkey noting that "on this symbolic day for our nation ... we share your pain. We support you in the fight against terrorism." It means that France got attached to victims of terrorist acts in Istanbul and reminded that it too was "a victim of terrorism," they said. Although, together with its Armenian "allies" France tacitly supports the same Kurdish terrorists and, in fact, supported the Armenian terrorism (aimed against Turkey itself) for decades before that.

In Turkey, not to "slap in the face" France or aggravate the already difficult relations on the anniversary of terrorist acts in the country, in which innocent people were killed, Turkey, out of respect for their memory, did not directly accuse Paris of supporting separatism and terrorism. But they diplomatically made it clear that they were well aware of the "sponsorship" of Kurdish terrorism by certain formal NATO "allies" of Turkey.

Turkish Interior Minister Suleyman Soylu officially stated that he rejects the condolences of the United States over the terrorist attack in Istanbul, hinting that Ankara also sees the US as to blame.

"We do not accept condolences from the US embassy," Suleiman Soylu said. "We know how this was co-ordinated. We know the message that was sent to us. And we will send a very strong message in response," the minister said.

The Turkish Interior Minister also voiced the main version of the attack: official Ankara believes it was organized by Kurdish separatist terrorists from the Kurdistan Workers' Party and the Democratic Union Party (PYD).

Speaking to the media, he also said that the attack in Istanbul was carried out on behalf of the Kurdish terrorist headquarters located in the Syrian district of Kobani and the perpetrator was sent to Turkey via Syria's Afrin. He said law enforcers had already conducted operations at 21 addresses and detained 46 people.

"Those involved in the terrorist attack could have already fled to Greece today, but they were swiftly captured," Anadolu Agency quoted the minister as saying. And where Greece is, it is not so much Washington as Paris that is known to act. In fact, the terrorist-separatist "Kurdish project," along with a related, but much "earlier" Armenian project, is also overseen by France.

Meanwhile, France has formed a kind of alliance in the region, which formally includes Greece, Armenia, Iran and Egypt, which are all members of different military-political blocs. Kurdish terrorists are "useful" to this alliance because they can destabilize the geopolitical opponents of this alliance, first of all Turkey, from within.

"Outside", the new alliance could well ignite a new war in the South Caucasus, preventing a peace settlement between Azerbaijan and Armenia. The well-known Russian journalist Maxim Shevchenko shared very interesting information about the relationship between France, Armenia and the Armenian lobby:

It should also be remembered that Algeria and Tunisia, mentioned in Maxim Shevchenko's video, where French colonisers led the genocide of the indigenous population, were also historical parts of the vast Ottoman Empire.  In its time of power, the Ottoman Empire stretched from North Africa to the south of today's Ukraine, where, incidentally, there is also a bloody war going on today.

There used to be a very interesting historical tendency - for centuries where people of different nationalities and religions got along peacefully in the territory of the former Ottoman Empire, "liberators and enlighteners" (which for some reason French imperialism and colonialism consider themselves to be) came and tragedies started. Even today, "enlightened and humane" France contributes directly or indirectly to tragedies. Let us also recall that Iran is now assisting the Russian aggressors in the war against Ukraine. Iran, which is within the sphere of French influence.

Obviously, where by war, where by terrorism and sabotage, where by supporting separatism, where by "combining and combining" these bloody methods, certain circles want to destabilise and "blow up" whole regions of the world. Without their involvement, these countries and regions can live peacefully and dynamically develop (as, for example, today Turkey and its partners - countries along the so-called "New Silk Road" that is taking advantage of internal peace and stability, including Georgia).