Armenian fighters have found their inglorious end near Kherson - repeating the "exploits" of Baghramyan's battalion has failed... 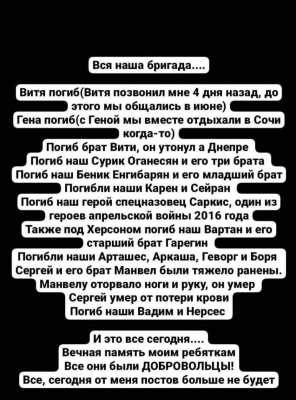 "Vitya is dead (Vitya called me four days ago, before that we communicated in June).

Gena is dead (Gena and I vacationed together in Sochi some time ago).

Vitya's brother died, he drowned in the Dnieper.

Our Surik Hovhannisyan and his three brothers perished.

Our Benik Yengibaryan and his younger brother died.

Our Karen and Seyran are dead.

Also killed near Kherson were our Vartan and his elder brother Garegin.

Sergey and his brother Manvel were seriously wounded.

Manvel's legs and arm were torn off and he died.

Sergey died from loss of blood.

Our Vadim and Nerses died.

Eternal memory to my boys!

They were all volunteers!"

This is a letter from a militant about his dead tribesmen near Kherson published by the Armenian nationalist telegram channel TSEHARON ARMENIA on November 11, 2022 - the day Kherson was liberated by the Ukrainian army. These are the Armenian mercenary fighters killed in just one day - because the letter specifically states that they were so-called "volunteers", i.e. they went to fight in Ukraine not by mobilisation, but of their own free will!  And how many more have died there and in other sectors of the front and there is no information about them yet? How many have been lucky to escape so far?

The question is, what were the representatives of the "most ancient nation" doing near Ukrainian Kherson? Did the South of Ukraine (about which they like to argue that it was "gifted" by the Bolsheviks to Ukraine, just like Karabakh to Azerbaijan) ever have anything to do with the mythical "Great Armenia"? Or are the relevant myths now "in the making"?

In principle, one can guess what "lured" the aforementioned Armenian fighters to Kherson. The Russian army was advancing from Crimea to Kherson with the aim of fully capturing the south of Ukraine - Odessa and the entire Ukrainian coast of the Black Sea. The most fertile areas of Ukraine. The young generation of Armenian nationalists, including those who had already fought and shamefully fled from Karabakh in Azerbaijan, wanted to take part in this "easy" (as they thought) conquest of a foreign land by the "mighty" (as they thought) Russian army in order to rob others' property and seize, if necessary, "appealing" houses, following the example of the Baghramyan battalion in Abkhazia. Perhaps they dreamed that they could also become a "respected man", as one of the commanders of the Baghramyan battalion Galsut Trapizonian became in separatist Abkhazia and perhaps the richest and most influential in the occupied Georgian territory.  Of course, the Armenian fighters were convinced that, as it was in 1992-1994 in Abkhazia and Karabakh, they would fight for them mostly with Russian soldiers, and they would seize and divide "loot" and revel in an opportunity to abuse and torture civilians with impunity.  But it did not work out.

By capturing Kherson and its suburbs on March 3, 2002, the aggressors, met with fierce resistance from the AFU, got thoroughly "stuck" and were unable to advance into Mykolaiv and Odessa region. The Ukrainian army, despite the initial assurances of Armenian propagandists to run away and surrender, went on a counter-offensive.  The occupants were forced to flee in a hurry to the left bank of the Dnieper River, surrendering Kherson, which had just been annexed and declared "part of Russian territory". Moreover, the escape was hasty and panic-stricken, some of the occupants drowned in the Dnieper while crossing, including, as can be seen from the above letter, some Armenian fighters as well.

The Armenian nationalist "heroes" were unlucky. Instead of wealth and glory, they found an ignominious death on Ukrainian soil. They will find the same death on all those lands where they are busy destroying the state integrity of their countries of residence, busy with terrorism and separatism, unless they get wise and stop trying to ignite a revanchist war for foreign lands, and will not be content with the territory within the internationally recognized borders, which was given to them under their state.