Separatists in Artsakh, Sukhumi and Tskhinvali have panic - Kherson surrenders 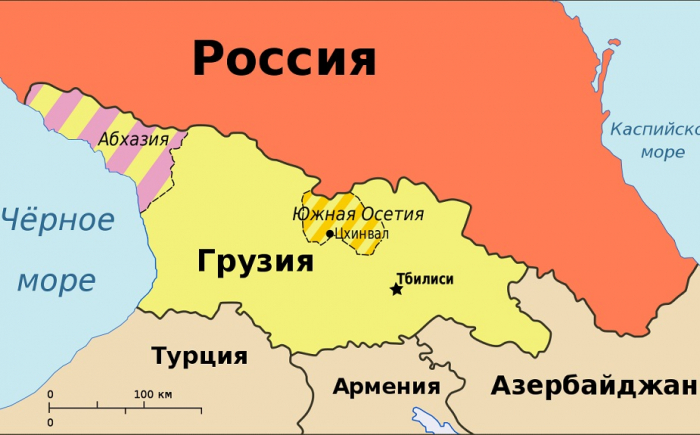 November 9, 2022 was the day when the separatists in Khankendi, Sukhumi and Tskhinvali started to really panic.  On that day, Russian propaganda officially announced that Russian occupation troops were surrendering Kherson and moving to the left bank of the Dnieper River.

In order to understand how shocking this news was for those "Artsakh" separatists who were counting on Russia to save them, we need to understand what the "official status" of Kherson is for the Kremlin. After all, it is the so-called "status of "Artsakh" that the separatists have been fond of speculating about lately.

Kherson region was recently annexed by Russia after the fake "referendum" and this occupied Ukrainian region is now a subject of the federation like Moscow, St. Petersburg, Krasnodar Krai and any other region of the Russian Federation under the Russian constitution. That is, it is the kind of "status" that the "Artsakh" separatists could not even dream of - being part of a nuclear superpower.

Alas, Russian "superpowerism" is largely a thing of the past thanks to the efforts of the Armenian lobby. Following the interests of the Armenian lobby, the Russian Federation has played with redrawing borders and has gone to aggression and war in Ukraine. In this war, Russia is already suffering an obvious crushing defeat. In other words, Russia can no longer hold on to the territories it has declared "its own" and is essentially surrendering "its" regional centre with "its citizens".

The illegal status of "regional centre of the Russian Federation" did not help the local collaborators in Kherson much. The so-called "Artsakh" status, however the Armenian nationalists may declare it, is of even less help.

The Russian Federation cannot protect its new "citizens" in Kherson, to whom it has just solemnly handed out passports. And in fact, "Artsakh" separatists were counting on the "Kherson scenario" in relation to Azerbaijani Karabakh, laying out the letter Z in Khankendi with Russian tricolors, which was enthusiastically reported by the main Kremlin propagandist Margarita Simonyan, stating that "Artsakh is Russia".

Having failed to retain Kherson, which is critical to the preservation of the occupied Ukrainian lands, the Russian military machine has signalled its impotence. The question is whether it will defend the separatists in Khankendi, Sukhumi and Tskhinvali when the question of transition of these territories under full control of Azerbaijan and Georgia respectively arises? And on what grounds will it defend these separatists?

The unprotected "Artsakh" separatists have two and a half years maximum to stay under the protection of Russian peacekeepers. Then their 5-year term agreed to by the 44-day ceasefire expires and they will inevitably leave Azerbaijani Karabakh. Khankendi will come under full Azerbaijani control.  The Sukhumi separatists will not "hold" Russian occupation troops and the Russian military base in Gudauta that is on Georgian territory absolutely illegally. And the question of such illegality will inevitably come up if it comes to a peace agreement as a result of the Ukrainian war.

Russia's inability to hold Kherson was partly due to the fact that the Russian Black Sea Fleet showed its weakness in the Ukrainian conflict. Not only was it unable to facilitate the occupation of Odessa and Nikolaev (as originally planned by the aggressors), but it lost its Flagship cruiser Moskva, and was recently subjected to drone attacks at its base in occupied Sevastopol. Meanwhile, Russia's military control over Crimea and Abkhazia was based on the belief in the "mightiness" of the Russian Black Sea Fleet. Today it is obvious that the Russian Black Sea Fleet has no chance in modern warfare. It suffers shameful defeats at the hands of the army of the country that, in fact, has no navy of its own at all. And this means that even if it wants to defend Crimea and separatist Abkhazia, the Russian occupants will not be able to do so.

Russia, surrendering Kherson at the same time with the help of international mediators, is literally begging Ukraine for peace negotiations. By concluding a ceasefire it hopes to retain at least some of the previously seized Ukrainian territories - above all Crimea.  Crimea was for the Kremlin a symbol of the alleged "revival of Russian imperialism", but in fact it is becoming a symbol of disgrace and payback for treachery.

After all, the so-called "Russian Crimea" originally became such under Catherine the Great (the monument was demolished in Ukrainian Odessa) as a result of Russia's treacherous violation of the treaty under which the Crimean Khanate had originally been declared independent and sovereign. And in 2014, international law was once again trampled by the Russian authorities, who illegally annexed Ukrainian Crimea, which, incidentally, had previously been officially recognised as Ukrainian by the same Russia.

Obviously, today the Kremlin will agree to anything if only Kiev is satisfied with a return to the 23 February 2022 position, but Ukraine will never agree to this. Therefore, Russia, if it does not want more shame, is obliged to return to its international borders as they were in 1991. And that means to clear Ukrainian Donbas, Moldovan Transnistria and Georgian Abkhazia and Tskhinvali region of its occupational forces. This can happen much faster than the separatists, who are already panicking but hope to "postpone the inevitable", are counting on.

Forcing Ukraine to negotiate peacefully Russia for more than a month has been attacking Ukrainian energy infrastructure that caused power outages in Ukraine.  At the same time, there are even worse power cuts in separatist Abkhazia. Although no one is bombing or shelling the energy infrastructure there. Given that they receive free electricity from the Georgian hydroelectric power plant "taken hostage", the separatists did not even bother to maintain properly the electricity networks, due to which they are regularly out of order without any war or shelling. That is, the separatists are not even able to dispose of stolen electricity to provide for their mere existence. It turns out that if Russia is forced to abandon the separatist region and evacuate its troops, stop financing the separatists and "humanitarian aid", then there will be a humanitarian disaster without any war.

Separatist leaders, looters and criminals in Abkhazia and Tskhinvali region should already think what they should do now when Russia surrenders Sukhumi and Tskhinvali in the same way as it surrenders Kherson. After that it will be useless to "hide" in Russia and hope for gratitude from the Russian government and its security services.

The fate of the so-called "deputy head" of the occupation "Kherson administration" Kyrylo Stremousov should teach them this. This once talented Ukrainian journalist from Kherson went into the service of the occupiers, believing that "Russia is here forever". On the eve of Kherson's surrender, his colleagues, who remained loyal to Ukraine, contacted him out of old friendship and persuaded him to try to surrender to the Ukrainian army in some way in order to save his life. Given his sincere repentance and the fact that he had not participated in the occupants' punitive actions and crimes against humanity, Kirill Stremousov, who had five children and his wife was expecting her sixth, could have served his time in a Ukrainian prison, but could have stayed alive himself and not left his children orphaned. But he hoped to the end that the occupiers "do not abandon their own".

As a result, on the same day, November 9, 2022, on the eve of the announcement of the surrender of Russian troops in Kherson, Kirill Stremousov was liquidated by the special services of the occupants. Officially, he was allegedly "killed in a traffic accident" on Russian-controlled territory in Kherson Region. But, according to Ukrainian journalists, the Russian special services simply "promptly" removed him, a collaborator they no longer needed, in order "not to talk too much".

The same or worse fate can await the separatist leaders of Artsakh, Sukhumi and Tskhinvali, especially if their hands are also "covered in blood". Therefore, advice to them is to try to voluntarily surrender to law enforcement agencies of Azerbaijan and Georgia respectively. Timely voluntary "surrender" and sincere repentance may affect a court decision to mitigate punishment for their crimes. This way at least they will stay alive. There is no chance that they will be left alive by security services of occupants and patrons of the separatists in Moscow.