By flirting with Armenian "Artsakh" separatism, Iran could lose the Caspian Sea coast. 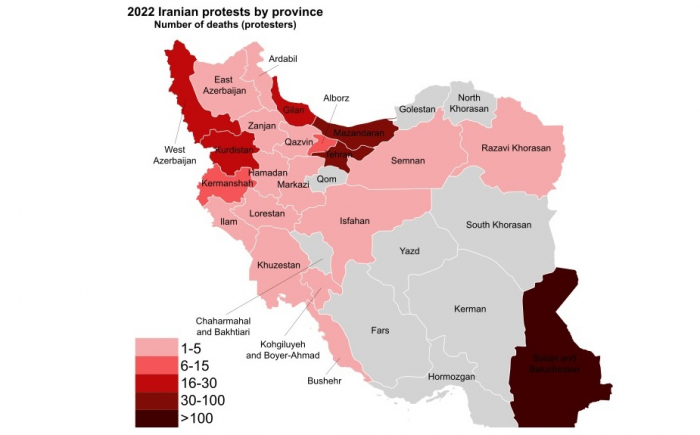 On the occasion of the 3rd anniversary of Azerbaijan's victory in the 44-day war the government of the Islamic Republic of Iran sent official congratulations, which seems at least hypocritical, given that Iran not only supported Armenia's occupation of Azerbaijani Karabakh and the separatist entity called "Artsakh" for many years, but now rattles arms every time revanchists and "Artsakh" separatists try to replay history. Azerbaijani President Ilham Aliyev reminded of the inadmissibility of such behaviour in his speech on the occasion of the Victory Anniversary in Shusha: "...Armenia must know that it is not the statement of some patron of Armenia that holds us in the current framework, but our own politics... They must understand this so that they do not fall victim a second time to those who sit abroad and want to consider this region as a playground...".

The paradox is that by organising military exercises on the border with Azerbaijan in support of the territorial claims of Armenia and the "Artsakh" separatists, Iran itself already has tremendous problems with the discontent of the population of a number of provinces. And to understand how serious the problem is it is enough to look at the map: 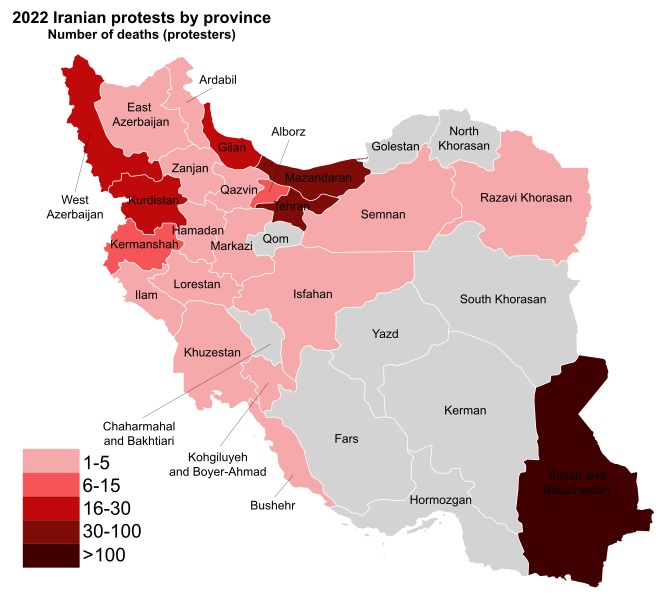 Here, Iranian human rights activists have broken down the provincial death toll in the crackdown on protests that erupted across Iran following the death on 16 September 2022 of a young girl, Mahsa Amini, who was detained for violating the authorities' "dress code". However, everyone understands that Mahsa Amini's death was just a pretext, a spark that ignited widespread protests. And the more deaths in the crackdown, the greater the extent of the people's discontent and protest sentiments.

The map shows that, if we exclude the capital Tehran, where there is the greatest opposition among young people and students, the most dissatisfied with the status quo are the national provinces of Iran, dominated by the "non-Persian" population. And these are not just "national fringes", but regions that occupy a strategically crucial position.

The world media has recently spoken of protest sentiments in Iran's South Azerbaijan, where people are unhappy about the infringement of rights and freedoms and their Azerbaijani culture and identity. But judging by the map, there are regions where dissatisfaction with the Tehran regime is even greater. These are, on the one hand, the far south-east, the province of Baluchistan bordering Pakistan and Afghanistan, and, on the other hand, the Caspian regions of Guilan and Mazendaran. The towns of Rasht in Gilan and Amol in Mazenderan have recently become the epicentres of the most massive protests and clashes between protesters and law enforcement officials.

Few people outside Iran know that, despite the "Great Persian" ideology being implemented in Iran, the Gilanians and Mazenderans living on the southern shore of the Caspian Sea are not identical to Persians. They have their own very similar languages, although belonging to the Iranian group, but rather far removed from Persian (Farsi).

Hilanians and Mazendarlians have even greater cultural differences with the Persians. Almost all researchers note the identity of the culture of Gilan and Mazendaran with the Turkic culture, above all with that of Azerbaijan. At the same time, Azerbaijanis constitute a significant part of the population of Gilan and Mazendaran and the administrative centre of Mazendaran province, Sari, is predominantly an Azerbaijani town. Sari and its surroundings are home to Azerbaijanis belonging to the Qajar tribe, the same tribe that dominated the Iravan and Ganja khanates and, for a significant period of history, Karabakh. The Qajar dynasty, which ruled Iran until 1925, descended from the Mazendaran Qajars..

ТWe should also recall that the Gilyan and Mazanderan aspirations for independence had already been staked on by certain outside forces in history. The most striking example is the so-called Gilyan Soviet Republic, which Soviet Russia attempted to establish in Gilyan in 1920-1921 after the complete occupation of the South Caucasus by the Red Army.

At the initial stage the Soviet emissaries relied on the Gilyan rebel units, already active in the region and fighting against the Shah's government, led by Mirza Kuchek Khan, who later quarreled with the Communists and fled to the forests. Today, Mirza Kuchek Khan is officially revered in Iran as "a fighter against the Shah's regime", but in reality he was largely a supporter of autonomy, or even complete independence, of Gilan from the central government in Tehran.

Even after the collapse of the Gilan SSR project, the USSR did not forget about Gilan and Mazendaran. Otherwise how to explain the fact that not only in Stalin's times (when the north of Iran was occupied by Soviet troops till 1946), but in 1980 there were compiled and published Gilan-Russian dictionaries. This phenomenon is unique, in general, taking into account the fact that Gilan used to be spoken locally and very few people in the Soviet Union, except specialists, were aware of the existence of Gilan and Gilans, moreover, that they had their own language. Moreover, the Gilani language had no official status, and in Gilan itself even in everyday life it was displaced by the Persian language, which was officially imposed by the authorities.

The concern for Gilan and Mazendaran (which includes the Golestan province, separated from it in 1997 and also populated by Turkmens), not only cuts off Iran from the sea completely, but also provides the shortest "land corridor" between Central Asia and the South Caucasus.  Therefore, the protests in Gilan and Mazenderan should concern today the authorities in Tehran much more than their Armenian friends in Moscow and Yerevan " shaking weapons" to support "Artsakh" separatism.