The forthcoming peace agreement between Azerbaijan and Armenia is a verdict on separatism.  Tbilisi is the symbolic place to sign it! 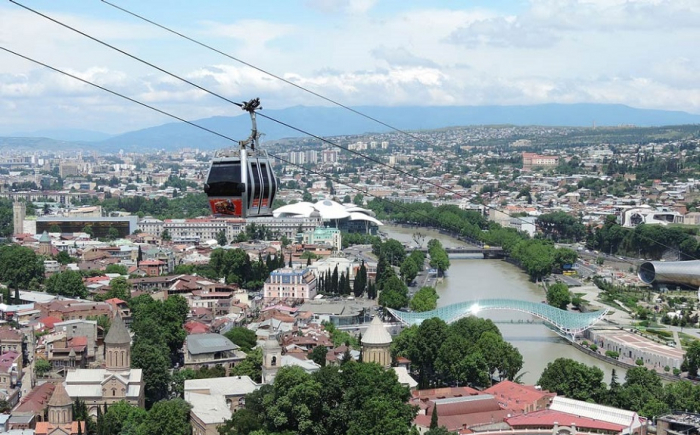 On November 3, 2022 the Armenian newspaper "Hraparak" published an article stating that in Georgia preparations for the meeting between the President of Azerbaijan Ilham Aliyev and the Prime Minister of Armenia Nikol Pashinian, where the signing of a document, marking the beginning of an era of peace between the countries, is actively going on.

The "Hraparak" newspaper itself is clearly against this treaty. From its material it follows that in Tbilisi Aliyev and Pashinian would sign the "western version" of the peace treaty, which implies the unconditional recognition of Karabagh as Azerbaijani, something the revanchists do not like much.  The choice of Tbilisi as the venue for resolving the conflict is allegedly linked precisely to the fact that Georgia is "the main vehicle for Western interests" in the South Caucasus.

The "Hraparak writes: " Such a document, we are told, may be signed before the end of November, or at least at the beginning of December. Surprisingly, the agreement is planned to be signed in Tbilisi. Georgia may become a mediator and a symbol of pan-Caucasian peace, since by this document the entire South Caucasus is given to Turkey, as the operator of the Western interests in this region. According to our information, active preparations are being made in Georgia for the meeting between Aliyev and Pashinyan and the signing of the document, marking the beginning of an era of peace."

But for some reason, Hraparak does not mention that Georgia has suffered from separatism in the South Caucasus. Separatism started not somewhere, but in Karabakh in Azerbaijan and not by anyone, but by Armenian nationalists. Further, separatism was mixed and ignited by the Armenian lobby in Georgian Abkhazia. As a result, Georgia has lost 20% of its territory that is still under occupation and has over 300 thousand refugees from Abkhazia and the Tskhinvali region.

People in Georgia are well aware and know that the separatist movements in Tskhinvali and Abkhazia were not only organized exactly according to the template of the "Artsakh miasma", but they were incited against Georgia by the same Armenian lobby and the same Armenian nationalists. They actively participated in the separatist wars against Georgia, in particular in Abkhazia, where their atrocities were committed by the Baghramyan battalion. Baghramyan's battalion distinguished itself by its atrocities.

Likewise, as in Karabakh, the Russian regular army fought on the side of the separatists and in fact became the executor of the "wishes" of the Armenian lobby. This ultimately led Russia to the current Ukrainian disaster and the almost inevitable prospect of withdrawal from the South Caucasus.
Thereafter, the question "what kind of peace can be made in Tbilisi" cannot even be raised in principle. Only with the recognition of the territorial integrity of Azerbaijan and Karabakh as an integral part of Azerbaijan and nothing else! And not at all because "the interests of the "West" demand it, and still less because "Turkey enters as an operator of the interests of the West". Moreover, there are different kinds of West and the same France, being a part of the West, in fact, continues to support "Artsakh" separatism and does not want Turkey to be the "operator" of its interests.

Anyway, "Hraparak" has to state that international recognition of Artsakh's independence with the mediation of Moscow has failed; in case the Prague Process continues, "Artsakh" may be depopulated and handed over to Azerbaijan. And explains why and how this will happen after the signing of the peace agreement:

"The signing of this document will mean Armenia's formal and final withdrawal from 'Artsakh'. Armenia undertakes not to interfere in any way in the affairs of 'Artsakh'. Citizens of 'Artsakh' will be deprived of their Armenian citizenship and funding. Not only the force structures of "Artsakh" will be deprived of funding, but also the whole system of state administration, from the local government to the apparatus of the "president". In addition, Armenia will receive the right to carry out charity and social projects, such as plastering and painting a demolished kindergarten wall. Anything beyond that will be seen as sponsoring and financing separatism and terrorism. The Armenian population of 'Artsakh' will have a choice. They will either accept Azerbaijani citizenship and, as a citizen of Azerbaijan, continue to live where they live, or, as a citizen of Armenia, leave Armenia.

Based on our information, the issue of granting some cultural autonomy to the territory populated by Armenians is being discussed. Azerbaijan is against any autonomy, but under influential pressure from Western civilized countries, may agree, realizing that this autonomy will remain on paper, in a very short time "Artsakh" will be completely depopulated, and the rest will be Azerbaijanized. Moreover, some settlements will be deserted in a few hours after the contract is signed. Thus Azerbaijan demands, for example, that territories populated by Azerbaijanis before 1991-92 but now under Armenian control be immediately vacated by Armenians. First and foremost this applies to Khojaly.

Entering Khojaly would be as symbolic for Aliyev as entering Shushi or Lachin. Given the signing of this agreement, Aliyev stated in Sochi that there is no Karabakh issue, it has been resolved and there can be no discussion on the subject. As regards the Russian peacekeeping forces, once part of the Armenian population leaves and the rest accept Azerbaijani citizenship, their presence in that region will become completely meaningless. Azerbaijan will declare that these people are citizens of its country, and Azerbaijan is capable of ensuring their rights and security on its own." - the "Hraparak" writes.
Regarding the "depopulation" of Karabagh, "Hraparak" newspaper is in a hurry to make a conclusion. Karabakh was depopulated under the occupation and separatist regime. Like Abkhazia and the Tskhinvali region were depopulated. On the contrary, the return of refugees will fill that blessed land with life.
What makes Hraparak confident that the majority of Armenians currently living in Karabakh will decide to leave it? Not necessarily. Of course, Armenian nationalists will offer them to move to a "new seaside Armenia", which they are hurriedly organising in separatist Abkhazia. But then Abkhazia will also have to be returned to Georgia sooner or later, and judging by the speed with which the influence of Russia is waning, sooner rather than later. And then where will these people go? The terrorists and separatist criminals, of course, are afraid to stay on Azerbaijani territory. They will keep running from place to place until they are extradited to Azerbaijan at Interpol's request.

However, Armenian civilians in Azerbaijan have nothing to fear (just as they have nothing to fear in Turkey, where tens of thousands of Armenians live peacefully in Istanbul). Azerbaijan is a multinational democratic state where the rights of all nationalities are respected. As in Georgia, where Armenians and Azerbaijanis live peacefully side by side in the same settlements, where Ukrainian refugees are welcome, but the Russians who do not want to go as "cannon fodder" to the war in Ukraine are not refused asylum.