The "missing" ancient Armenian churches have been compensated for by forgeries and the appropriation of Georgian churches in Georgia and in Armenia. Phillip Ekoziants has recently been actively educating his fellow countrymen about the real history of the Armenian people and thus curing the Armenian people of unhealthy nationalist "megalomania".  Recently he circulated a video regarding allegedly "hundreds of Armenian churches" in "anciently prosperous Armenian cities" that had been destroyed by "barbarians and earthquakes":

From this video one can logically conclude why Armenian falsifiers not only want to appropriate hundreds of Georgian churches in Georgia so badly, but have already appropriated dozens of Georgian churches on the territory of present-day Armenia. Pearls of Georgian architecture such as monasteries of Akhtala, Kobairi, Khnevanki, Svregi, Khujabi and many others are declared "Armenian-Chalcedonian" although there is nothing Armenian there. All inscriptions and frescoes in these temples are Georgian (except for khachkars, which were brought to the temples later). Thus, the list of "treasures of Armenian architecture" in the Republic of Armenia immediately includes dozens of "ancient Armenian churches" having nothing to do with Armenians. 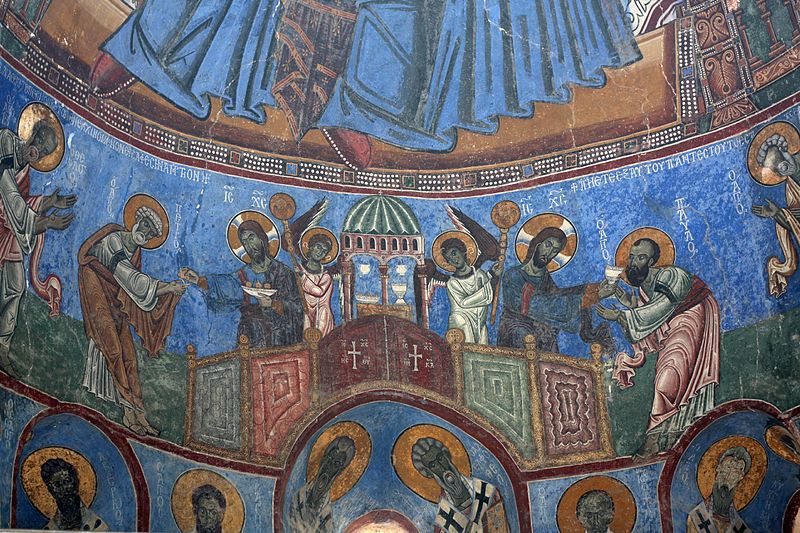 When comparing the capitals of Georgia and Armenia, Tbilisi and Yerevan, even a distant from history tourist is astonished by the huge number of ancient and ancient temples in Tbilisi (there are also many newly built temples, but no one poses them as "ancient churches") compared with Yerevan. In today's Armenian capital there are almost exclusively newly built churches. Certainly, many of these newly built churches are claimed to be "ancient", supposedly "restored on ancient foundations" or "reconstructed", but the fact remains that in reality they all appeared during the years of the Soviet regime, infinitely distant from Christianity.

Historians and travellers of the 19th century fail to see the "abundance" of supposedly "ancient majestic Armenian churches" in Yerevan, which became the centre of the Erevan Province of the Russian Empire (the Azerbaijani Iravan - the former capital of the Iravan Khanate). There were mosques, Sardar's palace was there. There were many other monuments of Azerbaijani Muslim architecture mercilessly destroyed during the 'reconstruction' of Yerevan. As for the Armenian churches in Iravan, however, there is no particular evidence. This is not surprising since even as part of the Russian Empire, even though it was massively populated by Armenian settlers, Irevan remained a predominantly Azerbaijani city. This is to say nothing of the fact that in the surviving paintings and memoirs of travellers Irevan, prior to its incorporation into the Russian Empire, was clearly a Muslim Azerbaijani city.

Armenian settlers, benefiting from the patronage of the Tsarist administration, built their churches in Yerevan. But little remains of these churches, too, due to the Armenian Soviet leaders' pursuit of 'ancient grandeur' in Yerevan.

So, for example, Surb Sargis church as an Armenian church was originally erected between 1835-1842. But during the reign of Catholicos Vazgen I this rather modest and already dilapidated church underwent a thorough reconstruction, ostensibly to "restore" its "original majestic appearance". Since, according to the "official" myth, this church, "founded in the first centuries of Christianity", was allegedly "destroyed by an earthquake in 1679. 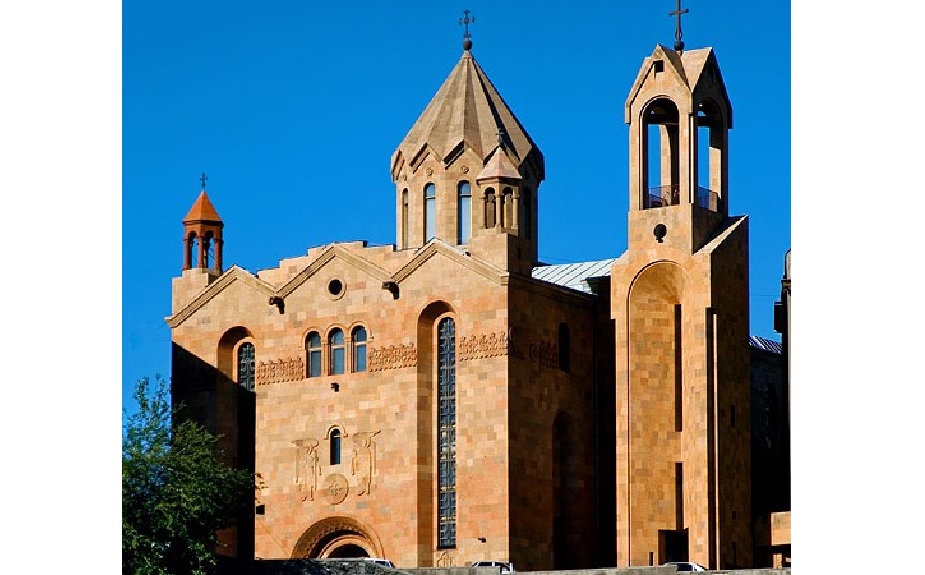 The restoration work on Surb Sargis church was carried out on the basis of a plan drawn up by architect Raphael Israelyan in 1972. It is clear that the reconstruction was carried out on the basis of the myths prevailing at the time about the "antiquity and grandeur" of Armenian architecture, with the result that even the church of 1835-42 has little left of it. The façade was clad in orange tufa from Ani and decorated with triangular niches. After Israelyan's death the construction works were continued by his co-author, architect Artsrun Galikyan. In 1971-1976 the interiors of the Church were restored. A gallery for the choir was arranged. The old dome was replaced with a new one, higher, with a multi-faceted fan-shaped spire.

The construction of the bell tower was completed in 2000. As a result, today St. Sargis church is shown to tourists as "an example of ancient Armenian architecture," although there is nothing "ancient" about it at all, almost nothing left even from the 19th century. This is 100% newly made.

The church of St. John the Baptist, allegedly built in 1710 on the site where there used to be another medieval church, founded in 670 and destroyed by an earthquake in 1679, is an "newly-made". In reality, however, it was probably built in the same 19th century. But nothing remains of that church either.  In 1979 Rafael Israelyan drew up a project of fundamental reconstruction of the church and presented it to Vazgen I, Catholicos of all Armenians. Ten years later the architect's son Areg undertook the project with the support of architect Baghdasar Arzumanyan and civil engineer Avetik Teknejyan. The construction and reconstruction was supervised by the urban engineer Mikayel Hovhannisyan.

The reconstruction resulted in a dome, red tufa clad outer walls and marble floors. Much work was done to restore the interior, a gallery was built for the choir on the west side, and the main altar was decorated with bas-reliefs. Later, the bell tower was built. As a result, we have a pompous new construction, presented as an 'ancient Armenian church'.  And several other churches in Yerevan are exactly the same, and are listed as "ancient" in tourist publications. The churches are at best from the 19th century, the time of the mass settlement of Armenians in Azerbaijani Iravan and its surroundings, but there is little left of those churches due to reconstruction (even by the communist authorities, who are formally distant from Christianity).

Armenian settlers also settled in Tbilisi (Tiflis), where they quickly became the majority of the population, and their proportion throughout the 19th century far exceeded that of Armenians in Yerevan (Erivan - Iravan).  Tbilisi (Tiflis) became a concentration of wealthy Armenian merchants and financial oligarchy, so it is not surprising that here Armenian settlers, with the help of the Tsarist administration (Tsarist Russia's budgetary money), actively seized and appropriated ancient Georgian churches. As a result, the abundance of churches in Tbilisi (both Georgian and those that became "Armenian") is noted by almost all travellers and researchers.  But unlike Yerevan, apart from new churches and newly built ones, there are really ancient and ancient churches in Tbilisi - more than 30 churches that are actively illegally claimed by the Armenian Apostolic Church (AAC).

It turns out that, according to Echmiadzin, there are more "ancient Armenian churches" in Tbilisi than in Yerevan. Seizure of churches has become a tool of Armenian nationalists for territorial claims against Georgia, because after someone else's churches are automatically claimed by them.