Armenia as a 'perpetually belligerent victim' and an attempt to free itself from this role in the past - in 1999. The second attempt is in the present. 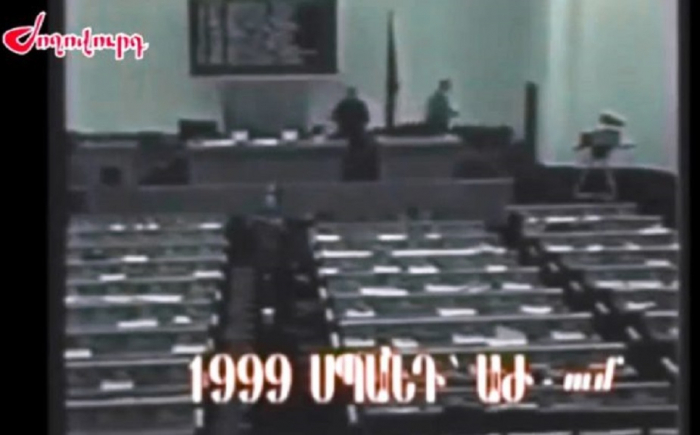 An interesting conclusion can be drawn from the analysis of the Armenian nation's history of the last 150 years - Armenians are simply imposed the role of "eternal victims", constantly at war with their stronger neighbours and therefore doomed to look for a powerful "protector" and literally beg for help from abroad.

Generally speaking, this is an abnormal state of life for any nation. After all, dozens of other peoples more or less reconcile and coexist with their neighbours. These relations with their neighbours are not always good, but in principle, there is no conflict that cannot be resolved peacefully, through mutual compromise. And only the Armenian nationalists have brought the situation to a stalemate with their absolutely insane claims to their neighbours, based on an absolutely fantastic invented and falsified "history".

Even today, there is an urgent question - who will ensure the continued existence of Armenians in the South Caucasus - Russia, the West or Iran, weakened by the efforts of the same Armenian lobby? The question "Can we somehow come to an agreement with our neighbours, without outside "helpers"? - sounds nonsense to the Armenian nationalist and is not even considered.

However, Armenian nationalists are always in search of "something provocative" for external forces to "come to the aid of Armenians" and for Armenia to reclaim something from its neighbours. And it must be said that Armenian nationalists succeeded in this quite well in the 90s. They not only managed, with the help of Russian military power, to capture Azerbaijanian Garabagh and arrange ethnic cleansing there, but in fact, with the help of the Russian Federation they captured for themselves Abkhazia, the land of which, as a part of "great Armenia", they originally did not even dream of in the 19th century. The Armenian lobby instigated a separatist war and ethnic cleansing of the Georgian population here and as a result, the Armenians in Abkhazia today are the ethnos that is totally dominant economically and demographically.

However, fair-minded members of the Armenian elite in the Republic of Armenia were already finding the role of the "perpetual victim", who was in constant need of external "protection and assistance for the sake of survival", increasingly irritating. In fact, the majority of the Armenian people had long had such a desire on a subconscious level.

That's why in the late 90s of the last century the Armenian people supported the party of former soviet leader Karen Demirchyan and not the separatist "heroes" who spilled the blood of peaceful Azerbaijani population in Karabakh. And after their defeat in the 44-day war, Armenians supported Nikol Pashinyan, who lost that war, rather than the same Robert Kocharian calling for revenge. Already then, in 1999, the Armenian people understood that some kind of agreement would have to be reached with their neighbours and that the goons of the "Karabakh clan" in power were making hostility and war with their neighbours eternal. And even though they secured their 'victories' in 1992-1994 with the help of Russia, the mighty Russian Federation and the 'weakness' of Armenia's neighbours are not eternal either.

Consequently, in 1999 Armenia was close to making peace with Azerbaijan and "getting out of its role" as an "eternal victim" and "perpetually belligerent fortress country", having, in fact, won the war in Karabakh, making concessions at that time. Yerevan could then conclude peace on far more favourable terms than it does today.  There was a "consensus" among much of the then Armenian government, including parliamentary speaker Karen Demirchyan and Prime Minister Vazgen Sarkisian, on this issue. The 'Karabakh clan' led by Robert Kocharian was categorically against peace and concessions to Azerbaijan.

As subsequent events have shown, the former Soviet special services, including the former KGB, which was reborn as the FSB in the Russian Federation, were also against peace, supporting the "Artsakh" and other separatists. For the time being, a little-known descendant of this structure, Vladimir Putin, unexpectedly became prime minister of Russia in 1999. And after that appointment there was a series of very strange terrorist attacks (house bombings, which were immediately, without any investigation, ascribed to 'Chechen terrorists')". Then came Putin's speeches and promises to "flush out the terrorists", a new second war in Chechnya and this suddenly made Putin super-popular amidst a hurrah-patriotic frenzy.

It is against the backdrop of the then war in Chechnya and 'hurrah-patriotic hysteria' in the Russian Federation that a unique terrorist attack takes place in the Armenian parliament on 27 October 1999. Unique in that terrorists purposefully shot dead all representatives of the government who were in favour of peace and compromise with their neighbours, including the de-occupation of Azerbaijani lands. "Coincidentally", none of the representatives of the "Karabakh clan" who took full power after the terrorist attack were harmed.

If we compare the events in Russia of that time with those of today, the analogies are simply begging to be drawn. But there are nuances. Chechnya and Ichkeria, then without almost any "exit to the outside world", is not modern Ukraine, where Putin's power is thoroughly "mired" in a war with which a significant part of the Russian army has been "ground up". While the formal ally of Russia in the South Caucasus, Armenia has "under its belt" not a victory, but a shameful defeat in the 44-day war. In Armenia's power is not the FSB's protégé, Robert Kocharyan (displaced into opposition), but the "pro-American" Nikol Pashinyan.

In 1999, Putin became super-popular and consolidated his power in Russia through a "small victorious war" in Chechnya.  Likewise, in relation to 'allied' Armenia, there is great temptation today to repeat the 'successful' terrorist act of October 1999. That is, to simply physically liquidate all the top officials of the Republic of Armenia who agree to compromise and make peace with their neighbours.

The fact that the Kremlin and the Russian Armenian lobby have such plans is evidenced by the article "Reliable partner". "Why the Kremlin wants to eliminate the Armenian prime minister" was published by the Ukrainian publication UNIAN. https://www.unian.net/special/nadezhnyy-partner-zachem-kreml-zhelaet-ustranit-premera-armenii-12027006.html
The article highlights that Kostantin Zatulin, recently banned from entering Armenia and a puppet of the Russian Armenian lobby, "compared Pashinyan's actions to those of Egypt's third president, Anwar Sadat, who was killed by a sharpshooter at a military parade" on the next anniversary of the Arab-Israeli war. The publication notes that this, according to the official version, the assassination was revenge for the rapprochement and alleged concessions to Israel, as well as the pro-American direction of the foreign policy. In other words, the revanchists and representatives of the Russian-Armenian lobby, with the help of the Russian secret services, were going to organize a "coup d'etat" in order to destroy the plans for a peaceful settlement in the South Caucasus, just as they did in 1999 with the parliament in Yerevan.

The Chairman of the European Party of Armenia, Tigran Khzmalyan, also confirmed this version. In his video interview, linked to an investigation by the Ukrainian resource UNIAN, he said that as Armenia tries to escape from a situation in which it is held hostage by Russia, it is not surprising that its leadership has become a target of the Kremlin. "The Lazarev Club," according to Khzmalyan, is a roofed gathering place for all Russian agents operating in Armenia, which is still a colony of Russia. According to the Armenian politician, the Lazarev Club has turned into a headquarters where another change of system was planned and the option of physically removing Pashinyan was being considered, as the latter is trying to take Armenia out of Russian control.

Khzmalyan considers Zatulin's words about Anwar Sadat as evidence that Moscow has decided to eliminate Pashinyan because "Putin's dying regime is ready for the most terrible adventurism".

"Now in order to boost the people against the authorities the manipulation of what the West is proposing with regard to the Karabakh issue begins. The dissemination of information by a Ukrainian resource is not accidental, as Armenia is the southern flank of the Ukrainian front. Armenia and Ukraine are in the same trenches and we have the same enemy," concludes Khzmalyan. Tigran Khzmalyan also spoke about the involvement of special services (FSB) in the explosions of houses in the Russian Federation in 1999, and in the terrorist attack in the Armenian parliament in October 1999.

Of course, Tigran Khzmalyan himself cannot be called a supporter of peace. Khzmalyan is a fierce Armenian nationalist, he took part in "miatsum", supports terrorist Jirayr Sefilyan, in relation to Georgia he declared that Tbilisi is "an Armenian city" and so on. It means that Khzmalyan, by and large, does not need a peaceful settlement in the South Caucasus. But he and other Armenian nationalists of today doubt that Armenia will be capable of expansion with the help of a weakened Russia. That is why Khzmalyan and his likes are ardent supporters of the West, particularly the EU and France, to begin defending Armenian interests in the South Caucasus. Hoping that they can do it better than Russia.

However, there are also those Armenians who really want to escape from the role of "eternal besieged fortress" and "eternal victim" for Armenia. Whether Nikol Pashinyan is one of them is hard to say. But Pashinyan, originally a U.S. protégé, is well aware that in case of a new attempt to restore Russia's influence in the South Caucasus he will not be left in power, but will be staked on the revanchists close to the Kremlin. Probably they will not leave him alive either. In any case, he also knows well those who were involved in the shootings in the Armenian parliament in 1999 of Karen Demichyan and Vazgen Sargsyan.