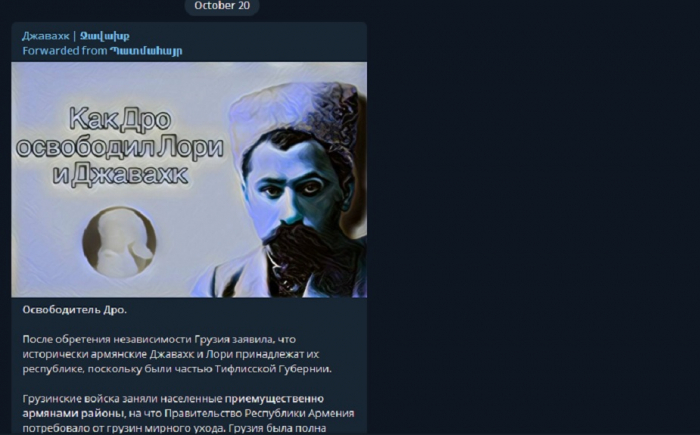 The Armenian nationalists, including the "Javakhk" separatists", while supporting the current Russian aggression in Ukraine, claim that they are fighting against "Nazism". But, at the same time, Nazi criminals Garegin Nzhdeh and Drastamat Kanayan (General Dro) continue to be the main heroes for them.

Recently, the separatist telegram channel Javakhk dedicated an entire "ode" to the creator of the fascist SS "Armenian Legion" Drastamat Kanayan under the eloquent title "How Dro liberated Lori and Javakhk (https://t.me/jvkhk1/1281 ):

After independence, Georgia claimed that historically Armenian Javakhk and Lori belonged to their republic, as they had been part of the Tiflis Governorate.

Georgian troops occupied the predominantly Armenian-populated areas, to which the government of the Republic of Armenia demanded that the Georgians withdraw peacefully. Georgia was determined, and Armenian Prime Minister Kajaznuni ordered Drastamat Kanayan to clear Lori and Javakhk of Georgian troops by military action.

In December 1918 Armenian troops led by Dro marched victoriously from Lori to Javakhk. The Georgian government soon approached Hovhannes Kajaznuni with a proposal for reconciliation.

Negotiations on December 30th led to a final agreement to end hostilities on the night of December 31st.

During the Lori peace conference, a neutral zone was established to be connected by transit to Armenia, while negotiations on Javakhk collapsed due to the pro-Georgian stance of the great powers."

Somewhat paradoxically, it is not the love of the Armenian "Javakhk" separatists for Georgia that they are prepared to consider anyone as their "liberator". And not only Drastamat Kanayan, but also his boss Hitler, as long as he is against Georgia.

Drastamat Kanayan began his "career" with terrorism and murder of the Baku governor Mikhail Nakashidze, a Georgian by birth, which also arouses "admiration" in Armenian nationalists. And he finished by creation together with Garegin Nzhdeh of the Nazi "SS Armenian legion" which was notable for atrocities against the civilian population on the territories occupied by Hitlerites, including participation in the genocide of the Jewish people - the Holocaust. However, for "Javakhk" separatists the most important thing is that Drastamat Kanayan killed, fought with Georgia and during the Armenian-Georgian war he wanted to conquer ("liberate" in Armenian terminology) native Georgian lands of Samtskhe-Javakheti. It seems that even today Armenian nationalists are waiting for "liberators" in Samtskhe-Javakheti. With the beginning of Russian aggression against Ukraine, they hoped that after the victory in Ukraine, the Russian Federation would organize a new aggression against Georgia and "liberate" "Javakhk" for them. And although Russia is now thoroughly bogged down in the Ukrainian war, the separatists have not lost hopes of "liberation" and confirm their activity as a "fifth column" in Georgia.