Armenia 'planning to betray' Russia and "change the master" 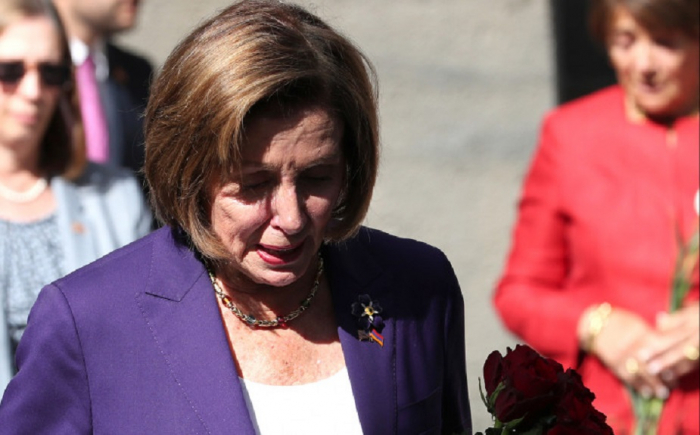 September 2022 will go down in the history of the "ancient and long-suffering people" most probably as a time of "national consciousness upheaval". It will be no less significant a turning point than April 1915. Recall that at that time, all the masks from the long-standing hypocritical pretense of Armenian nationalists regarding "Armenian unity with the Ottoman Empire" were finally torn off (yes, yes, this was once talked about no less than later about "friendship and brotherhood with Russia).
Since then, Turkey became a "mortal enemy" for Armenians. And now Russia is becoming such an enemy. At that, Armenian nationalists managed to do more harm and nastiness to this "enemy" than any nation has done to Russia in its entire history. Moreover, they did less harm to Turkey in 1915 than they do to Russia now. Naturally, all the good that Russia did for the Armenians is instantly forgotten, just as after 1915, all that the Ottoman Empire did for that nation is forgotten.

Recall the position Russia is in today thanks to the Armenian lobby. Russia, in full compliance with the Armenian lobby's policy of supporting separatism and redrawing borders, has engaged in a bloody war with Ukraine. It was ethnic Armenians - Lavrov-Kalantaryan, Simonyan, Keosyan, Babayan, Kurginyan, Gabrelyan, Stepanian, Galustyan, Andresyan, Martirosyan, etc. - who brought this war closer and unleashed it most. Russia's aggression against Ukraine has turned the whole world against Russia and led to unprecedented, damaging sanctions and unprecedented isolation for the Russian economy. Ultimately, Russia finds itself in a unique and unprecedented position in its history. Not only is Russia waging a war of extermination against its brotherly and closest people, the Ukrainians, but Russia is seen as an aggressor and is wished to be defeated by practically the entire world. Russia has virtually no allies.

Moreover, the war in Ukraine also threatens the very unity of Russia. Huge sacrifices are being made by the nations that make up the Russian Federation. Young people are dying and people are increasingly asking, "why and for what purpose is our gene pool dying?" The Buryats, the Tatars, the Dagestanis or the Tuvinians did not and do not have any "claims" to the Ukrainians. But there are already questions to Moscow and to the Kremlin, and the further they will be, the more questions. All the more questions for the indigenous peoples of Russia are why none of them is even close to being represented in governing bodies or the elite of Russia like the "most ancient and long-suffering", whose statehood is outside the borders of Russia.

Not to mention the fact that questions arise among the Russians themselves. Why should they hate their Ukrainian brothers and love, defend and fight for Armenia, which, judging by recent events, is clearly betraying the Russian Federation?
Instead of Russia, Armenians now have a new "friend" and "saviour" - the United States. Moreover, the USA did not have to spend any money or shed the blood of its soldiers on the battlefields or even change its geopolitical plans in order to become the "hope of the Armenian people". It was enough for Nancy Pelosi, the speaker of the US House of Representatives, on the eve of her retirement (which will take place in November of this year, nobody is doubtful) to come to Yerevan, say a couple of meaningless and not obliging to anything phrases "in support of Armenia" and theatrically shed crocodile tears in the memorial of the mythical "genocide". That's all!

Armenia simply "flamed up" with love to the USA and at the same time hatred to Russia, although the US authorities did not even have to urge Armenians to do this and conduct Russophobic propaganda. Mass anti-Russian rallies began in Armenia, particularly with demands to leave the CSTO, and a lot of anti-Russian slogans appeared. On the eve of Nancy Pelosi's arrival, posters with "friendship with Russia" slogans, portraits of Putin and American flags were removed all over Yerevan. It is likely that in the near future it will not be safe for Russians, especially those from the Russian base, to stay in Armenia, as they are already viewed as enemies.

There has been a fundamental and principled reversal in Armenian national consciousness. Russia is no longer Armenia's friend, but a "participant in the aggression of Turkey and Azerbaijan". And almost a "perpetrator of genocide". And why? Because Russia, being bogged down in the war in Ukraine at the mercy of the same Armenian lobby, simply cannot open a "second front" and fight for Armenian territorial claims against its neighbours in the South Caucasus.

This is despite the fact that the U.S. is neither going to fight for Armenia, nor spill the blood of its soldiers for Armenian interests. Although Nancy Pelosi openly said in Yerevan that the U.S. is on Armenia's side in the conflict between Armenia and Azerbaijan, Washington has not and will not undertake any special measures against Azerbaijan, and is not going to promise any real assistance to Armenia. Nor do they intend to send a contingent to defend Armenians (as a last resort, they will send another retiring politician to "shed a tear" over the "victims of genocide").

Nancy Pelosi stayed in Armenia for less than 24 hours; despite the Armenian media and experts' insinuations that Nancy Pelosi's visit to Armenia would last 3 days, it ended 20 hours later. Pelosi left Armenia, leaving Yerevan itself to negotiate with Russia and Iran (which, remember, is an enemy of the United States and "love for America" should, in theory, close Armenia's "Iranian" window to the outside world, although unlikely), as well as Turkey and Azerbaijan. The situation is not easy, given Yerevan's unwillingness to fulfil its commitments to unblock communications and open the Zangezur corridor.

This corridor has proved to be vital for Russia, which has fallen into isolation, precisely because of the Armenian lobby's murderous policy. Fighting today against Zangezur corridor for Russia is like pulling a noose on someone who is trying to "pull him out of the noose".

By refusing to fight for Armenia today, Russia (which has historically shed rivers of its own blood for Armenians) was actually acting for the benefit of the Armenian people, giving them a chance to quickly make peace with their neighbours and unblock communications. If only the Armenian lobby had not been so "cunning" and the Armenians understood the real interest of their people in the modern world. Unfortunately, many people in Armenia, drugged by nationalism, do not fully understand this.

On the contrary, Nancy Pelosi's allegedly "pro-Armenian" statements in Yerevan and her "genocidal tears" will do nothing but evil to Armenia in the end. They have effectively made further escalation between Armenia and Azerbaijan irreversible, which cannot predictably end in anything other than another defeat for Yerevan.

After all, having received "verbal assistance" from their new "best friends", Armenian politicians will now, by definition, be unable to make the concessions and compromises so vitally needed by Armenia with Turkey and Azerbaijan. There is no longer any question of Armenia voluntarily fulfilling its obligations in the Zangezur corridor. The euphoric public opinion regarding the "US support" for Nikol Pashinyan will simply not understand it here. It turns out that the US and Nancy Pelosi rendered exactly "a bearish service" to Armenia with their "tears" over the "genocide" and "words of support". New victims among the Armenian soldiers will in fact be on their conscience. It means that Nancy Pelosi's crocodile tears were "in advance" for new victims of the adventurous policy of the Armenian nationalists.

Most interesting is the reaction of the most influential Armenian lobby in Russia to Armenia's actual betrayal of Russia. Its bizarre behaviour during the escalation of the situation on the Armenian-Azerbaijani border was written about by the well-known Russian journalist Alexander Nevzorov:

"The main, most influential and most aggressive mass of propagandists on Russian TV are Armenians. They are adherents of Putin, ardent preachers of the ideas of the "Russian world": Simonyan, Keosyan, Babayan, Kurginyan, Gabrelyan, Stepanyan, Galustyan, Andresyan, Martirosyan and so on. There are a lot of them, they are in charge of budgets and airtime. The Armenian clan is now all-powerful on the Russian television. It should be noted that they do not even dare to speak about bloody trouble on the Armenian-Azerbaijani border, because they do not yet understand the Fuhrer's position. But if tomorrow Putin's mental disease will be aggravated, and he will decide that one war is not enough for him, and will move the remnants of his tattered troops to Armenia, what will all these scum do? Whose side will they be on?"

Since Nancy Pelosi's visit to Yerevan and the anti-Russian hysteria in Armenia, the Armenian lobby in Russia has been silent. This is strange, given that, in the past, any contacts between Ukraine, the Baltic states or Georgia and the US were the subject of fierce attacks by Armenian propagandists on Russian federal TV channels. RF "forbade" Georgians and Baltic states to be friends with USA, while Armenians can curse Russia and swear at Russians with the last words in the heat of "love towards USA" and simply do not pay attention to it? Including Margarita Simonyan, who trained in the same US.

However, if we take into account that the Armenian lobby operates as a single entity and is subordinated to the same "centres" (located not in Russia but in the West), then everything falls into place. Armenia's current betrayal of Russia came as no surprise to them at all. More precisely, the Armenian nationalists betrayed Russia long ago, back when the USSR collapsed, and it was they who fomented, as modern history shows, the fatal separatist conflict in Karabakh, dragging Russia into the conflict on the side of the separatists, thereby launching the process of "redistribution of borders".

Sooner or later, by all logic, Russia, led by the Armenian lobby, was bound to fall into a "Ukrainian trap" which risked being fatal for it. And the Armenian lobby is doing everything to ensure that Russia gets "stuck" in this trap. They seem to understand very well that by their activities Russia is doomed and will not be able to "save" Armenia and serve its interests. However, they have long had a new "master" and Simonyan knew very well whom she would work for back when she was a trainee in the US. It's just that now it is becoming "open and clear", just like the original betrayal of Russia by Armenian nationalists.