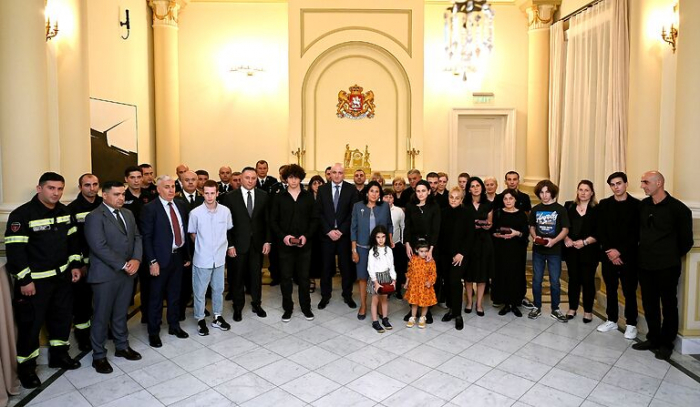 Georgian President Salome Zourabichvili awarded the Medal for Civic Dedication to rescuers and first-aid responders who lost their lives in the helicopter crash near Gudauri resort on July 29.

“We gathered here today to honour heroes. Dedication means sacrificing oneself to save someone else’s life. This is, perhaps, the highest human dignity, when you can sacrifice yourself for the life of others. We will never forget that! In today’s event, the country showed that life and human life are of utmost importance, and everything should be done to save them.

We should probably do more to ensure security to prevent the recurrence of such a tragic event. We claim to be a tourist country. Tourism means security and all infrastructure measures taken for a security guarantee,” President Zourabichvili said.

At the decision of Prime Minister Irakli Garibashvili, the families of the deceased helicopter crew members, rescuers, and first-aid responders received GEL 100 thousand as financial aid.

The rescue helicopter, which was called to help paragliders, crashed in a ravine on July 29, killing the eight people aboard, the crew, the rescuers, and first aid staff.