If the Russian state is manipulated by the likes of Simonyan, it will be nothing but a disaster for Russia! 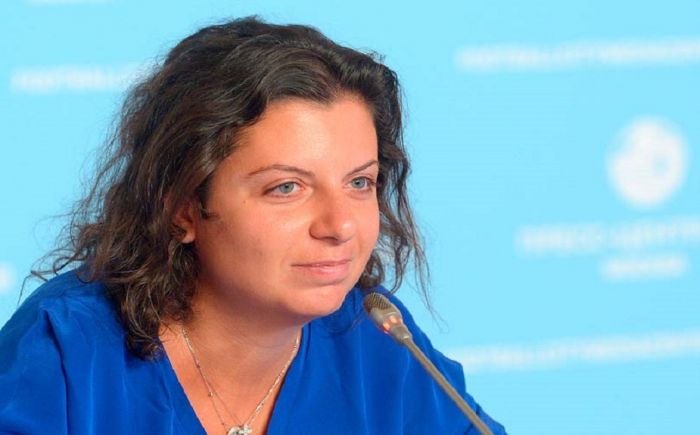 On 6-11 September 2022, Russian occupation troops suffered a crushing defeat in the Kharkiv region of Ukraine. The territories and towns that the Russian army had been taking (e.g. Izyum) for months, turning everything into ruins, were liberated by the Ukrainian armed forces in a matter of days and hours. The occupiers fled, abandoning their latest equipment and ammunition depots.

Via various channels, the Kremlin leadership began frantically asking Ukraine for "negotiations, peace and a truce". But such a peace should have been concluded earlier, when in March 2022 Turkey succeeded in persuading Ukraine to agree to a gradual de-occupation of Crimea over 15 years, with "saving the face" of the Kremlin regime. At the same time, it was quite realistic for Russia to "bargain" for a long ceasefire by withdrawing troops to the line of demarcation as of February 24, 2022.

Now the shame will be hard to avoid, as the Ukrainian leadership has made it clear to the aggressors that it will only begin peace talks after the unconditional deoccupation of all Ukrainian territories, including Donbass and Crimea, to the borders as of 31 December 1991.

On the evening of September 11, when Russian troops disgracefully fled most of Kharkov Region and the Ukrainian army reached the border as far as the Oskol River, the Russian military struck at Ukraine's critical infrastructure - thermal power plants and electrical substations.  In particular, CHPP-5 in Kharkiv, which is the largest in Ukraine, was damaged.

These attacks are nothing short of terror against civilians, and against their most vulnerable. Entire areas were left without electricity, including maternity homes and hospitals, and hundreds of seriously ill people faced the prospect of being forced to switch off life-support machines and die. Calling things by their proper names, this is nothing short of cowardly terrorism and a crime against humanity, with the Russian army shamefully fleeing the battlefield, it appears to be "taking revenge" on the civilian population.

Similarly it is interesting to analyze in what information sequence the Russian military leadership committed such crimes. This followed "information preparations" and direct demands for strikes on Ukraine's energy infrastructure - thermal power plants and even nuclear power plants - deployed by Armenian propagandists, who pretended to be "Russian patriots". In addition to the Armenian channel "Elder Edda" (which even Russian ura-patriots call "Ara Edda"), the main Kremlin propagandist Margarita Simontyan made a direct appeal and demand to the Russian military to hit the energy infrastructure. She published the following appeal in her telegram channel on the morning of September 11, 2022

"Well this morning the last working power unit at Zaporizhzhia NPP has been shut down.

So why did this happen? Because the Ukrainian Armed Forces have been hitting the nuclear power plant endlessly. Yes, actually, if only on it. Infrastructure objects, especially power engineering, are perhaps the main target for the Ukrainian military. They hit the thermal power plant in Donetsk and Luhansk. They destroy power lines.

Energy facilities are a target for Ukrainian saboteurs, and not just in the republics. See Belgorod recently.

I do have one very, perhaps strange, and even trivial question: how long are we just going to look at this and not respond? Is there no thermal power plant in Ukraine? Power transmission lines? Sub-stations? Well, everything else. And yes, a nuclear power plant. Don't they have any? Or doesn't anyone know where they are? Any chance of a clue?

Well it's just that our non-response, not flying the Calibre into such facilities, looks, let me put it neatly, very strange.

Maybe now is the time at least?"

Simonyan made a similar call on television in a programme by Kremlin propagandist Solovyov:

" No guarantees for love,

It's a very bad thing, brethren...

This is more than staying.

What's with the light, neighbours?"

Margarita Simonyan immediately became a "heroine" among short-sighted Russian ura-patriots, because it turns out the Russian military "listened" to her.

Generally, if you listen to ogres like Margosha Simonyan, you can quickly lead your country to destruction and humanity to a nuclear disaster. In fact, Margosha Simonyan has already called for a live nuclear strike on Ukraine. And in a call for strikes on Ukraine's energy infrastructure on September 11, 2022, she mentioned the nuclear power plant as well, with a call to hit the nuclear power plant as well.

If the Russian army and the Russian state are "ruled"-manipulated by the likes of Simonyan this cannot end in anything but disaster. All this makes us ponder the fate of Metsamor NPP which is already hopelessly outdated and extremely dangerous and, moreover, is in the hands of the same lunatic representatives of Margarit Simonyan's team.

And finally, about the reaction of Ukrainians: if anyone in the Russian Federation thinks that they can be "forced to negotiate" on their terms by "energy terror" with blackouts after all the victims that Ukraine has suffered since the Russian aggression, they are deeply mistaken. The reaction of Ukrainian society to the strikes on TPPs and energy infrastructure was exactly the opposite - no negotiations with terrorists. In other words, by calling for strikes on critical infrastructure, people like Simonyan are only prolonging a fatal bloodbath for the Russian Federation and leading Russia to an ignominious demise.

For the very future of the Russian people and indigenous peoples of Russia today, it is important to remove such insane cannibals from the airwaves, from power and shut up the provocateurs. And also to remember that Ukrainians are a brotherly people and top-notch warriors - all of Russia's historic victories were won with the help of Ukrainians. Such people cannot be broken by force, even with the help of cunning provocateurs such as Simonyan.