Does Georgia allow planes from Iran carrying weapons for Russian aggression in Ukraine? 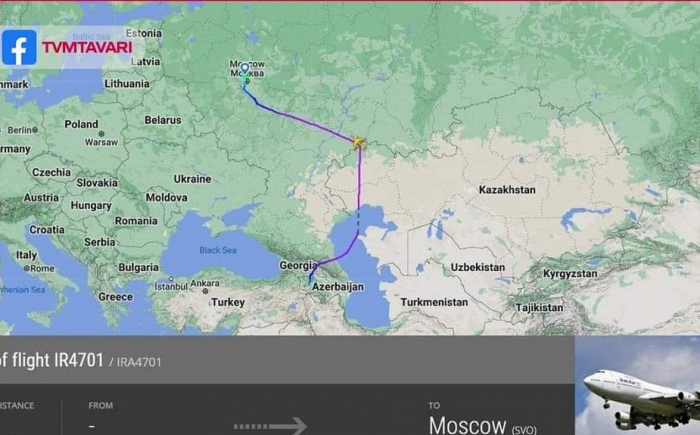 The Russian Federation has started to suffer tangible losses in Ukraine in recent weeks. The Ukrainian armed forces have in recent days broken through the occupier's front in Kharkiv Region near Balakleya and are advancing on the strategically important towns of Kupiansk and Izyum. Simultaneously, the situation is dire for the occupiers in the south near Kherson, where even earlier strikes on bridges across the Dnieper River and a Ukrainian counterattack have begun, leaving the Russian army grouping on the right bank of the Dnieper virtually cut off from supplies.

Under such circumstances, the Russian army critically needs new resources and new armaments, and modern ones at that. Under sanctions from outside, this can be obtained only from the few "allies". Among the latter is the Islamic Republic of Iran, which has already started supplying Russia with combat drones, for which the Russian army is significantly inferior to the Ukrainian army.

The US publication The Washington Post (WP) reported on 29 August that Iran had sent to Russia the first batch of unmanned aerial vehicles to be used in the war against Ukraine. The Mohajer-6, Shahed-129 and Shahed-191 drones were reportedly sent to Russia on 19 August. The US administration has confirmed this information about deliveries of drones to Russia from Iran. "According to our assessment, Russia received the Mohajer-6 and Shahed series UAVs from Iran over several days in August. The Russian transport planes loaded the UAVs' equipment at an airfield in Iran, then they flew from Iran to Russia. That's what we see, that's our assessment," White House spokeswoman Carine Jean-Pierre said at a briefing.

There is no doubt that as the situation on the Ukrainian front worsens for the Russian aggressors, the need for urgent arms shipments from Iran will increase. It is important which air corridors will be used for such deliveries.

Military expert Zura Batiashvili shared on social media that it is most likely that these supplies today are being carried out through Georgian airspace.

As per information published by Terror Alarm, dozens of Iranian IRGC cargo planes have landed at Russian airports and in Russian-occupied Ukraine since the start of the Russian invasion. The last such flight with an unknown destination from Iran to Moscow was on September 4. There is some speculation that this is how Iran is supplying Russia with weapons, which the Kremlin is using in its war against Ukraine.

If you look closely at the map of cargo flights from Iran, Azerbaijan has not allowed them to use its airspace, while Georgia has allowed the flights. Although Turkmenistan has also refused to let such planes through. The Iranian planes, in addition to Georgian airspace, also flew through Armenia and Kazakhstan, linked to Russia by the CSTO 'alliance'.

Under the current geopolitical conditions, assisting Iran in supplying weapons to Russia is an unfriendly step towards Ukraine. Iran has not only supported Armenia's occupation of Azerbaijan's Karabakh for many years, in fact, it also indirectly supports the occupation of Georgia's Abkhazia and Tskhivali regions. We should remind that the regime of Bashar Assad that recognized their fake "independence" is supported not only by Russian, but also by Iranian "bayonets". And if Iran was against support of separatism on the Georgian territory, the regime in Damascus would have hardly gone for such "recognition" despite requests from Moscow and intrigues of Lavrov-Kalantarian. But to all appearances, there were no special objections from Tehran to such anti-Georgian demarche of the Assad regime.

In fact, today the fate of de-occupation of the Georgian Abkhazia and Tskhivali region is being decided in Ukraine. If Ukraine wins and defends its territorial integrity, the rapid de-occupation of Georgian lands will be inevitable, and if Russia manages to "break" Ukrainian resistance, including through arms deliveries from Iran, and "legalize" occupation of foreign territories, Georgia may ultimately lose Sukhumi and Tskhinvali.