Abkhaz youth against the "gift" of Pitsunda to the Kremlin 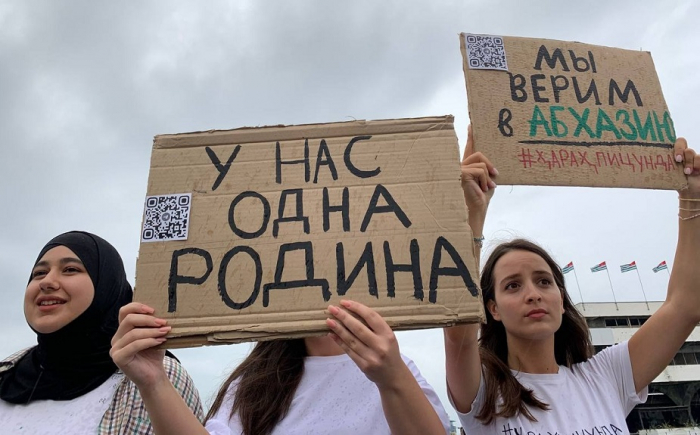 In Abkhazia, the young people are increasingly less supportive of the separatist "values" of the deluded older Abkhaz generation. Hence much of the lack of understanding between the separatists and the younger generation. Propaganda, in which hatred towards Georgia and separatist slogans about "fight for freedom" are intertwined with theses about "unbreakable friendship with Russia" is less and less welcomed by young Abkhazians. All the more that they themselves see very well how, under the cover of these slogans, their people are dying out, rampant corruption and social injustice is flourishing. Well, the "friendly" Russia behaves as an occupant in Abkhazia, does not take into account interests of the Abkhazian people and is trying to get the best Abkhazian land.

Young Abkhazians are also unhappy that Pitsunda is being taken away from them and they realize in what misery Abkhazia is really in. The separatist "veteran" organizations, timidly opposing transfer of Pitsunda have already gathered and tried to appeal to the Russian authorities and Russian President Vladimir Putin himself by constantly repeating theses of "friendship with Russia".

Many people even initially said that supposedly Putin "does not know and does not understand" that taking Pitsunda away from "independent" Abkhazia is "not good" and even that this allegedly happens without his knowledge. Although, the so-called Russian "ambassador" to Sukhumi clearly and unambiguously said that it was Russian President Vladimir Putin who wanted to take away Pitsunda and even threatened not only to stop financing of the separatist Abkhazia, but also to withdraw the Russian military base.

Unlike the "veterans" young Abkhazians seem to realize that their native land is under occupation. They can see that under the occupation and maintaining the current puppet separatist regime, their prospects are few - death in the war unleashed by the Kremlin in far-away Ukraine or poverty, unemployment and disenfranchisement in their native land, where the best corners will be occupied by occupants, and native residents will simply not be allowed there.

Apparently, already young Abkhazians do not have much illusion that the occupant leadership "does not know that laws are being broken". They all know very well.

As a result, on September 5th 2022 an action of protest of Abkhazians against the demands and claims of Russian occupants on the Abkhazian-Georgian land was held in Sukhumi for the first time in modern history. At the rally Russia was not directly called an occupant, but the tone of the slogans had nothing to do with the previous false statements about "friendship and cooperation.

An initiative group of the Abkhazian youth held a protest in the centre of Sukhumi - a flash mob against ratification of the agreement on transfer of the territory of Pitsunda to the Russian Federation by the separatist "parliament".  "We want everyone to hear our voice. We are for keeping the land in Pitsunda under the jurisdiction of Abkhazia! This action is peaceful and caused solely by national interests. We want to show by example that it is not scary, important and necessary to demonstrate our position. In the future, we will welcome your support, initiative and ideas to hold future actions.  Let's not be silent!  This action was not initiated by any political movement, party or force" - this was the statement of the young Abkhazians.

At the end of the flash mob, a group of about 20 young men and women marched through the streets of Sukhumi with posters in Russian and Abkhaz languages. The posters in Russian in particular read: "We believe in Abkhazia", "Defend our national interests", "We have one motherland", "If we give up the land, we lose our freedom.", "Why are we giving up our home?" and others. The activists made several stops, including at the Sukhumi administration.

Curiously, one of the Abkhazian girls taking part in the action wore traditional Muslim clothing. This is also a very significant moment as the separatist regime and occupants suppress religious feelings of young Abkhazians, both Christians and Muslims. The separatist ideology favours religious organizations "under the supervision of the FSB" and revival of primitive paganism.

Meanwhile Russian Orthodox churches in Abkhazia, where all the canonical Georgian clergy were expelled, were illegally given to "newcomer" priests from the Russian Federation that treated Abkhazians with contempt and arrogance while Abkhazian Muslims were not allowed to build a mosque. The latter is done purposefully. By officially announcing "repatriation of descendants of Muhajirs" the separatist authorities are well aware that most of them are Muslims. Having arrived in Abkhazia Muhajirs face disenfranchisement in the religious sphere. On the other hand, the rapidly growing Armenian community is becoming more active. Their intention to build another Armenian church in Tsandripsh has recently become known.

Obviously, the young Abkhazians, for security reasons, prudently did not mention a word about Georgia and the need for reconciliation with the brotherly Georgian people during their rally. After all, in such case, they would immediately have been accused of "betrayal" and "working for the Georgian security services and NATO" and could have been thrown in jail.

However, more and more young Abkhazians say among themselves that there is more real freedom and opportunities for young people in Georgia than in the occupied territory, that Georgia is "open to the world", in contrast to the separatist ghetto that the occupants and their puppet regime of Sukhumi have established in Abkhazia. There is also an understanding that with the current separatist regime intact young Abkhazians, at best, have a prospect of being powerless "servants" of high-ranking occupants as they get their hands on Abkhazian land. But over time, most likely, there will be an understanding that Abkhazians will be able to preserve their land and their identity only in unity with the Georgian people in a common state in conditions of complete de-occupation of Abkhazia.