Putin wants to "annex Georgia and Armenia in one fell swoop". Vardanian's mission 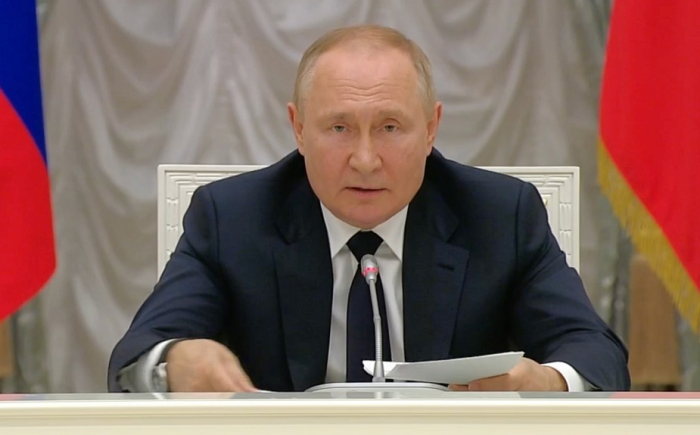 An interesting piece of information was recently published by the FIS's General Telegram channel, which is familiar with the Kremlin's inner "kitchen". Here are excerpts from the post:

"On Friday 2 September, Russian President Vladimir Putin held an operational meeting with the permanent members of the Russian Security Council. After the main part of the meeting, Putin continued to discuss several topics in a small circle.

At the beginning of the closed part of the meeting, Secretary of the Security Council Nikolay Patrushev gave a report on the situation on the front, focusing on the precarious position of Russian troops at several frontline locations. Patrushev also provided alternative data on Western arms losses that had been provided to Ukraine, and this data differed significantly downwards from that of the Russian General Staff and Ministry of Defence. For example, according to Patrushev, the number of notorious US HIMARS MLRSs destroyed was only two, which differed several times from the military bloc leadership's figures. Putin listened carefully to the report and asked Patrushev several questions, in particular, why there was such a difference between the data on troop and weapon losses in Patrushev's report and that of the General Staff, to which the Security Council Secretary suggested redirecting the question to the General Staff and the Defence Ministry, while pointing out that he did not doubt the accuracy of his data.

Further discussion turned to the subject of personnel cleansing and appointments to the Interior Ministry, all going according to plan and Putin expressed hope that everything would go smoothly, praising the process with modest words of praise.

There was another topic of discussion with Kazakhstan and the latest reformist statements by the Kazakh President Kassym-Jomart Tokayev. Putin expressed harsh dissatisfaction with Tokayev's uncoordinated actions, with much more than the usual swearing remarks against the Kazakh president. Putin lamented that he "did not solve the problem with Kazakhstan" this winter and did not take advantage of the crisis Tokayev found himself in. At the same time Putin expressed doubts about the expediency of opening a second front in Kazakhstan, giving preference to Georgia. According to the Russian president, "it is possible to annex Georgia and Armenia in one fell swoop" by finding a compromise with Erdogan on the region..."

The theme of "a second victorious front" has not disappeared from the Kremlin's agenda. And, as Kavkazplus suggested, Kazakhstan as a "second front" for the Russian Federation is fraught with great risks, which is realised by Vladimir Putin himself. Therefore, choosing between the "Kazakh" and "Georgian" direction of expansion, the Kremlin prefers the second one.

Moreover, it seems that Putin himself wants to open "the second front" against Georgia, since he is personally very interested in Georgian land. While Russia occupies only 20% of the Georgian territory, the Kremlin has to "coddle" the separatists, feed them, play expensive games in so-called "independent Abkhazia". And there is no "gratitude" for the fact that the separatists have been fed. Abkhazians are not eager to give Putin the Abkhazian land they like. They even have to allow Abkhazians to express their discontent that the Kremlin leadership wants to appropriate Pitsunda to itself "as a dacha". If only someone in Russia tried to be so indignant at another residence of Putin. The FSB would have quickly "carried out explanatory work" with him and his relatives.

Meanwhile, if Russia occupies the whole of Georgia, then the need for the Kremlin "to listen to the voice of the Abkhazian people" will disappear automatically. Abkhazia will be simply "bluntly" annexed, the dacha in Pitsunda will be seized without any "intergovernmental agreements" that require "ratification", and those disgruntled Abkhazians will be partly destroyed, partly exiled to the FSB cells, and others will be exiled further to the east.

One more interesting point is that Putin wants Russia to join Abkhazia with Russia. Putin wants Georgia to join Russia together with Armenia. Surely this is not just Putin's plan, but that of the Armenian lobby as well, who wants to dramatically expand the area of Armenian settlement with Russian weapons and create the same "Greater Armenia". This will also include Georgian lands, including Abkhazia, where there are already more Armenians than Abkhazians, but they are still "forced to tolerate" in the separatist authorities and play the game of "friendship and brotherhood of Armenians and Abkhazians" that has already bored Armenian nationalists.

With the complete occupation of Georgia flirting of the Armenian lobby with the Abkhazians will end.  Pitsunda will be given to the same Putin for a summer house, and the Armenian nationalists will "master" the remaining lands of the Georgian Abkhazia which will find itself "deep in the rear" of the Russian occupation troops. And not only the land of Abkhazia. Surely they will "redistribute" occupied Georgia in favour of Armenia, giving Armenians not only Samtskhe-Javakheti, but probably "native Armenian Tbilisi" as well.

At the same time, such a "march-through" of the Russian military machine through Georgia to Armenia would bring the revanchists from the Karabakh clan to power in Yerevan. The demarche of the Russian billionaire of Armenian origin Ruben Vardanyan, who "refused" to be a Russian citizen and "as an Armenian citizen" moved to "Artsakh" (in the zone of responsibility of Russian peacekeepers on the territory of Azerbaijani Karabakh) is not incidental in connection with the possibility of such plans. Vardanian's ties to the current Russian prime minister, also of Armenian origin, Mishustin, whom Ruben Vardanian described as a "real Armenian", should also be taken into account.

Indeed, on the one hand Mishustin is now puzzled and concerned about the issue of a "loophole" for the Russian Federation to avoid Western sanctions, and Ruben Vardanian will no doubt arrange such a "window" through Armenia, both for himself and for oligarchs close to the Kremlin. But perhaps that is not the only concern Mishustin has. If the plan of "one stroke unite Georgia and Armenia" is approved in the Kremlin, the same Vardanyan with his capital will not only ensure the coming to power of pro-Russian revanchists in Armenia, but at the same time organize the implementation of plans of occupation of Georgia by Russia "from Armenia" where Russian troops are already present. In this regard, Georgia should take very seriously the dramatically increased "interest" of Armenia and Armenian business in "cooperation with Georgia" and "new transit routes" (including through occupied Abkhazia).

However, it is not impossible that all this is being done in preparation for a new Russian aggression, which will aim not only at a "military corridor" to Armenia, but also at the elimination of Georgian statehood in general. All the more, the Kremlin is increasingly saying that allegedly Georgia, like Ukraine and Kazakhstan are "artificial entities". But if the Russian aggression is seriously "mired" in Ukraine, and the Kremlin does not yet dare to attack Kazakhstan for fear of scale of a new war, Georgia, as the "weakest" neighbour, where Russia has already occupied 20% of its territory, may well try to occupy it completely.