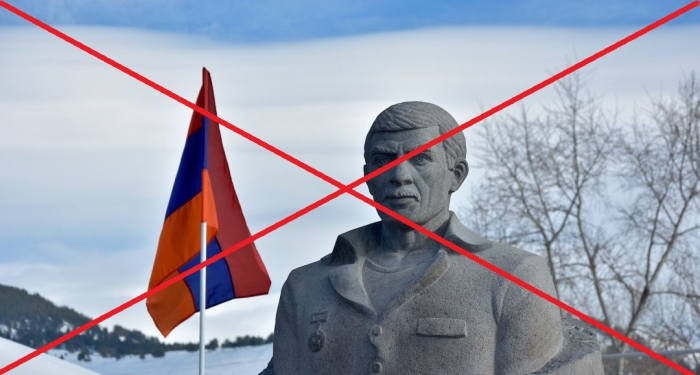 On February 8, at 14:00, in front of the Georgian parliament building is being held a rally against the installation of a monument to the Armenian militant separatist Mikhail Avagyan in Samtskhe-Javakheti. Tbilisi City Hall sanctioned the action.

Georgian citizens of Azerbaijani nationality who initially appealed to the Tbilisi Mayor’s Office to organize a rally on February 5 initiated the action. However, as of this date, the rally was not authorized, and citizens appealed to the mayor’s office again, postponing its date to February 8.

Recall that on January 20, in the village of Bugasheny of the Akhalkalaki municipality, Armenian nationalists, in the presence of the Armenian ambassador to Georgia, established a bust for the separatist and terrorist, who participated in the genocide against the Azerbaijani civilian population in Karabakh (including Khojaly), Mikhail Avagyan.

The installation of the monument to the Armenian separatist militant provoked the indignation of Georgian refugees from Abkhazia, many of whom had relatives and friends died at the hands of Armenian terrorists, as well as Georgian Azerbaijanis.

And naturally, the glorification of the separatist and murderer of civilians provoked outrage of Georgian Azerbaijanis, since Armenian provocateurs timed the installation of a monument to the separatist executioner especially on January 20, the anniversary of “Black January” in Baku.

The city hall of Tbilisi, at least from the second time, allowed this protest against the glorification of the separatists. Moreover, Armenian nationalists each year on May 8–9 in Tbilisi, the capital of a country, which is affected by separatism, hold their provocative events to “celebrate” the seizure of the Azerbaijani city of Shusha and unfold the separatist flag of the so-called “Artsakh”.

“We assume that up to 300 people will gather for the rally, but there may be more because there are so many people in Georgia who are outraged by the installation of a monument to the bloody murderer of peaceful Azerbaijanis. We will seek the demolition of the monument”, - said one of the organizers of the rally against the glorification of the separatist executioner.

But there is no doubt that many more citizens of Georgia will gather for the action. The dictation of the Armenian nationalists in Georgia is becoming more and more arrogant and provocative; they dispose of the Georgian land as “their own”.

If now they do not stop their arbitrariness, then the Georgians may lose their homeland. Indeed, because of people like Mikhail Avagyan, the Georgians of Abkhazia lost their homes and their lands, their relatives and friends.

Armenia simply mocks Georgia and the Georgian people, demanding transit through the occupied territories and regularly voting at the UN General Assembly against the return of Georgian refugees to Abkhazia and the Tskhinvali region. This is despite the fact that Abkhazia is actively “developed” by the Armenians, who have already become the majority there and have put the economy of the separatist territory under control. Armenian religious organizations have put forward claims to 465 Georgian churches and want to seize Georgian churches throughout the country, leaving the Georgians not even a “a piece of land” in their native land.

If the Georgian authorities and the Georgian people do not want to repeat the fate of the Georgians of Abkhazia throughout whole Georgia, they must immediately and firmly put an end to the provocations of Armenian nationalists and dismantle the monument to the executioner.