The deterioration of Armenia's army is acknowledged by the Armenians themselves 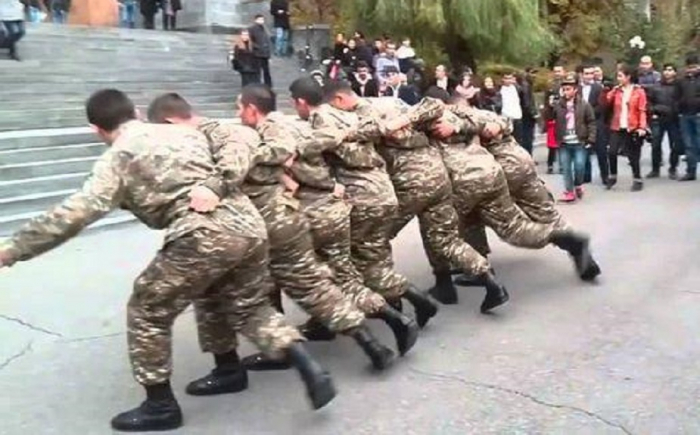 The myth of a "victorious Armenian army" was completely dispelled during the 44-day war. In principle, the Armenian army's previous 'victories' had also been achieved by 'other people's hands and bayonets'. In particular, the capture of Azerbaijani Nagorny Karabakh in 1992-1994 was achieved solely by Armenia, thanks to the tacit approval of the Azerbaijani government. Armenia was able to seize Karabakh in 1992-1994 thanks solely to the tacit participation of the Russian army on its side in the hostilities. However, during the 44 day war all attempts by the Armenian lobby to draw Russia into the war failed, and the defeat of the Armenian armed forces was entirely logical. The Armenian army was totally unprepared for modern warfare.

Nevertheless, after the shameful defeat in Karabakh the Armenian nationalists are still dreaming of revenge. But the question remains - what army will carry out this revenge? After all, for almost 2 years, since the military defeat in autumn 2020, the situation in the Armenian army has not improved at all, despite the announced "reform". Only a "cosmetic reshuffle" of senior military personnel took place, but on the whole, the army is led by the same corrupt generals who were promoted under Robert Kocharyan and Serzh Sargsyan.

Corruption in the army remains atrocious, and non-statutory relations make it a living hell for soldiers. The Armenian Armed Forces are in last place in the post-Soviet space in terms of combat training and mastery of modern weaponry. Even Armenian nationalists, including those professing revanchist ideas, have to admit this. In particular, Ashot Aramyan's article "Wagtail Army" in the extremely nationalist and revanchist edition "Golos Armenii" with an eloquent subtitle: "Our militaries shine not in shooting and endurance, but in... songs and dances" ( https://www.golosarmenii.am/article/156800/armiya-tryasoguzki ) is devoted to problems of Armenian army. Here is the piece in full:

"The fact that the army reforms of the governing CC party in Armenia (Civil Contract Party - ed.) are stalled and going in the wrong direction has become most obvious from the results of the lost war in Artsakh, when, in particular, the "strawberry" reforms left the troops on the front line without basic bread and water, and the personnel turmoil contributed greatly to their defeat on the battlefields. However, the government of the "commander-in-chief" Pashinyan is methodically and persistently trying to permanently destroy the country's armed forces...

Another "reform", when for 24 million drams (about $60 thousand at the current exchange rate) it is possible to shorten the period of compulsory military service from 2 years to 4.5 months, lies in the same deck of very shaky ideas of the authorities about the army service and in general about the national security of the country. A further stratification and division of society into those who can pay the required sum and those who cannot is perhaps the most obvious existential danger for the state, where before the "velvet revolution", on the contrary, the unifying concept of "Nation-Army" was followed. Now, instead of consolidating society, we are being offered further fragmentation, stratification, as a result of which the army will finally lose its fighting ability.

By the way, the Defense Ministry itself has recently admitted that it has completely failed the «Я» ("I") («Ես եմ») program, when the conscripts could sign a contract for military service for 3 years, after which they would receive a bonus of 5 million drams. Thus, according to the MoD, not a single such application was received during the 2021-2022 drafts. Moreover, numerous servicemen refused from further participation in the mentioned program after the war in "Artsakh" in 2020, having decided to limit their service to 2 years and ignoring monetary compensation. No wonder, given the mediocrity of the command and the overall helplessness of the armed forces at a critical time for the country.

At present, only three soldiers are still participating in the «Я» programme, and their three-year service term ends in January 2023.

The Armenian military-political leadership could finally understand, at least on the basis of the failure of this programme, that this is not about money at all. The problem is much deeper, but in order to see it, it requires appropriate competence, which the current leadership is completely lacking. The government and the Ministry of Defense continue to press the material factor, completely ignoring the issues of military-patriotic education of youth and considering military service not as an honorable duty of a citizen, but as a kind of punishment, from which one can get rid of for money.

The current deplorable state of our armed forces can also be seen in other examples. In particular, teams from Armenia are not among the medalists in various military competitions of the ongoing Army International Games ARMI-2022, although in some nominations only teams from 4-5 countries are competing. We have reported in detail on the truly disgraceful performance at the "Tank Biathlon" in Alabino, when all three Armenian crews took last place in their weakest group from the weakest division, in recent GA reports.

Our military servicemen did not excel in sniper accuracy, military athleticism and stamina, nor in driving military equipment, so Armenia can at best expect to win prizes in the "Peace Warrior" contest - an exact match, by the way, to the spineless peace agenda pursued by the Pashinian government without regard to realities. In this contest, soldiers compete in the best organization of medical care, demonstration of... literary, artistic and dance skills, knowledge of history - in short, in things that are not directly related to combat training.

The Armenian team has already won one such "trophy", although I am not sure that this is something to be proud of. At the literary-artistic and dance creative stage "Cavalier and Madam" held at the Monte Melkonian Military and Sports College, each participant/participant personally performed a number in one of the nominations: song, dance, musical instrument playing, recitation of a lyric poem. That's where we won first place. It's not hard to imagine Monte turning over in his coffin...

As a result, instead of the combat-ready armed forces we once had, we will soon get some amorphous mass of poorly trained "people with guns" - something like "Shaggypants Army", if you remember the Soviet Latvian film of the same name, where ordinary street kids fought the White Guards during the civil war. And there, shake your goose-ass, no matter how much you shake it, all the same: defeat is guaranteed in any case...". End of article.

A simple conclusion can be drawn from this material - in case of any military clash, the "valiant Armenian army" will be immediately crushed. In this regard, the question arises: why Armenian nationalists, being perfectly aware of the deplorable condition of their army, are so persistently unwilling to reach a peaceful settlement with their neighbours and open communications, in particular, the Zangezur corridor? If they do not want peace, but want war, will they fight for them? The Armenian army is by definition incapable of fighting a serious war, much less winning one.

The conclusion is that the revanchists want to drag Russia back into the war for Armenian interests. The fact that almost all the revanchists supported Russia's aggression against Ukraine is easy to explain.  It seemed to them that the Russian Federation would quickly "deal" with Ukraine, which is many times inferior to Russia both in armaments and economic potential, force it to recognize the redrawing of borders and "engage" the South Caucasus, creating a "great Armenia" with Russian weapons. But the aggression against Ukraine has "bogged down". The Russian Federation does not have the strength to help Armenian revanchists. And Armenia's only chance for normal existence and development is peace with its neighbours and abandonment of claims to foreign territories, because they simply have no hope for their army to realize these claims and ambitions.