Ruben Tatulyan's "generosity" towards separatist Abkhazia and what the Abkhaz must "pay" for it. 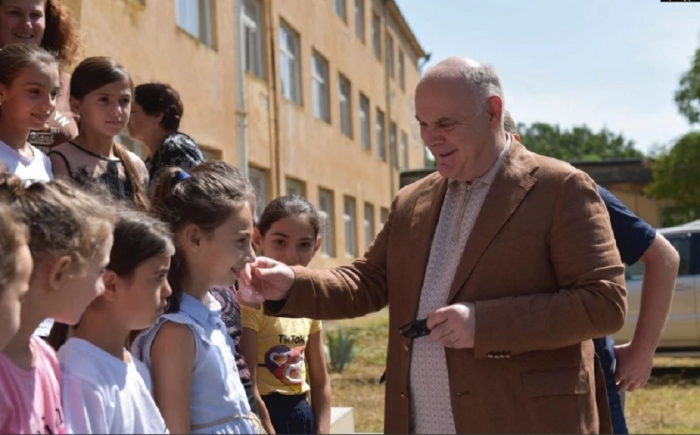 Everything in life has to be paid for. Separatist Abkhazia has been living on handouts from Russia that occupies the Georgian territory for years. After all, the same Abkhazians, if they have been to Russia, and especially in the Russian hinterland, would have asked themselves a question: why are they so "generous" when thousands of Russian villages and small towns are chronically underfunded and remain in a terrible depression.

And then finally, it became apparent even to the most naive ones - Russia paid money to the separatists not "just for nothing", but in order to get their hands on Abkhazian land. But if the Abkhazians object, they will simply stop paying handouts.

The proxy separatist "president" Aslan Bzhania said this almost directly in his speech at the so-called "Public Chamber of Abkhazia". He directly referred to a letter of the so-called "ambassador of Russia to Abkhazia" in which the "diplomat" informed the leadership of the separatist "republic" that the Russian government would be forced to apply financial pressure if solution of such issues as transfer of state residences in Pitsunda together with the surrounding territory to Russia was delayed.

Nowadays the Russian government has a way to spend money. So-called "contract servicemen" who are fighting in Ukraine are paid at least 300 thousand rubles a month - money unheard of by Russian standards, even many governors and mayors of large cities do not get such official salary.  Even more are paid to mercenaries and those fighting in the Wagner PMCs. If a soldier dies in Ukraine, his family receives 7 million rubles. That is not to mention other expenses for the war, because of which the budget of the Russian Federation, despite the huge revenues from oil sales, is already in deficit.

On the other hand, the Kremlin "saves" on separatists. In the same separatist "DPR" and "LPR", all men, including those with disabilities and those completely unfit for military service, are forcibly mobilized and "thrown to the slaughter", without spending not only on salaries, but even on weapons and equipment. After all, the units of the DNR and LNR are officially considered "allies" and are not subject to the level of remuneration and standards of arms and equipment adopted by the Russian army. They are cheap "cannon fodder" and this is also the "perspective" for the population of Abkhazia and the Tskhinvali region if the war drags on. After all, they too are considered "allies" and have already officially recognised the so-called DNR and LNR. And it is unlikely that from now on the Kremlin will fund the separatists of Sukhumi and Tskhinvali more generously than its "allies" in the east of the occupied Ukraine.

Moscow has already stopped feeding Sukhumi separatists. And, apparently, in the future, regardless of whether they give them the land they "like" or not. Obviously, the Russian authorities will take whatever they like in Abkhazia under their occupation, not even asking the puppet separatist authorities and especially Abkhazian people, since such "outrage of people" arose with "official registration" of transfer of just Pitsunda. Well, if they do not surrender it "voluntarily" Abkhazians will be deprived of funding in the near future. If they agree to give Pitsunda they will be deprived of funding as well, but a little later ...

However, it is not only the Russian leadership that Abkhazians should be "grateful" for. Apparently, they still have to pay for past "gifts" to far more calculating and ruthless "sponsors", who so far continue to show "an attraction of unprecedented generosity" in relation to the separatist Abkhazia.

On August 20th 2022 the separatist so-called president of Abkhazia Aslan Bzhania presented a bus to a school in a village of Tamysh of Ochamchire district. Bzhania himself studied and graduated from this school. His parents used to teach here. Aslan Bzhania particularly noted that the bus was purchased and presented by Ruben Tatulyan, a native of Abkhazia.

"It will get better in the future, you will take children to the swimming pool and cultural events. You have the most beautiful vehicle of today," he said.

It turns out strange. Until recently, Russia, occupying Abkhazia, allocated huge funds to maintain the separatist regime, the kind that most Russian regions do not even dream of. But the separatist leader could not afford to buy a school bus for his home school and they accept "handouts" from a man known for his criminal past, as well as ruthlessness towards rivals and "debtors". And this happens when Abkhazians were directly reminded through the Russian "ambassador" that they must pay for the past "generosity of sponsors".

More and more Ruben Tatulian is behaving like a "master" in Abkhazia. At that, if you think about it sensibly, he humiliates the separatist president by throwing a very symbolic "handout" to his home school bus, hinting at what poverty has reached under his leadership "independent Abkhazia".

This is not the first "patronage gift" of Ruben Tatulian to the separatists. Meanwhile, the situation with funding of the separatists from Russia shows that the Abkhazians will have to "work off" the "generosity of the patron" very soon. At that, what interests Tatulian and his fellow "patrons" is not even hidden. They are interested in Abkhazian land, or rather Georgian land.

What the Kremlin does not take away from Abkhazia will be appropriated by the "brothers-Armenians" as "gratitude for past generosity. All the more that they need Abkhazian land for resettlement. Right these days Armenian settlers are leaving Azerbaijani Lachin and Azerbaijani villages that were seized 30 years ago in the zone of so-called "Lachin corridor". There is no doubt that some of them will choose separatist Abkhazia to settle in a new place. Where there are already more Armenians than Abkhazians.