Who blew up Dugin's daughter? 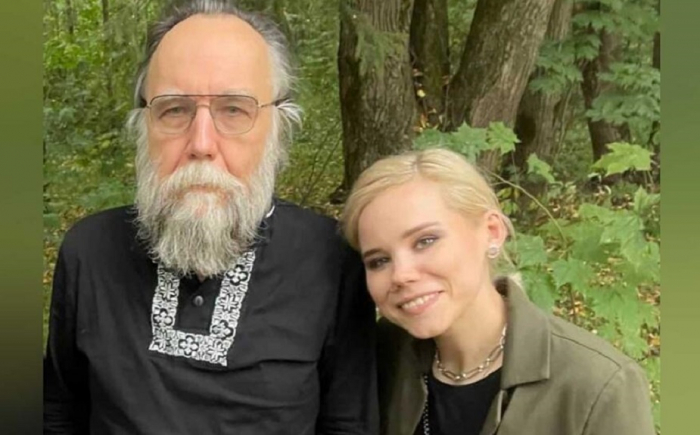 "Dugin-ogly is rushing to become the frontman of Orthodoxy in Russia. It is worth here to let go of a long beard, print a manifesto against the globalism of the United States, and here you already hang the label "enlightened". Pay attention, he keeps fasting like a broken-down, like a correct Russian person. A special operation, spirituality. Dugin is a wingman of Panturanism in Russia, his friends are fierce Islamists and Turkish thugs. He is allowed to do so.  I recall a dialogue between Andrei Rublev and Theophanes the Greek. Andrei: when will it all end? Theophanes: probably never."

The author of this furious Telegram post, published on 19 August 2022, is the long-time pro-Armenian Russian social activist Valeria Oliounina, who, apparently, her Armenian friends forgot to warn her to "slow down". In any case, in recent weeks all pro-Armenian media outlets have stopped criticizing Alexander Dugin. Valeria Oliounina does not belong to the "most ancient nation" and is probably considered by them as a shallow but useful "Russian goof".

Valeria Oliunina was once "bewitched" by representatives of the "long-suffering" people with their "antiquity" or whatever else and made "a greater Armenian nationalist than the Armenians themselves" - and Oliunina has been trying ever since. Apparently, "pure enthusiasm", receiving neither special payment for her zeal, nor at the same time "valuable guidance" from the "ancients". This is why she is "out of control". And Valeriya Oliunina by inertia continued to attack Alexander Dugin, whom the Armenian lobby hated for his "Eurasianism" and respect for Turkic peoples, but "as if by order" in recent weeks in their media stopped criticising him.

And the next day, on 20 August 2022, Alexander Dugin's daughter Daria, was blown up in her own car in the suburbs of Moscow. The preliminary cause of the explosion in Dugin's car was the detonation of an improvised explosive device. According to the Baza newspaper, Daria had been driving for about 10 minutes before the explosion.

And RT Editor-in-Chief Margarita Simonyan was among the first to react to the death of Daria Dugina, the daughter of famed Russian political scientist, sociologist, and social activist Alexander Dugin:

"Dugin's daughter was blown up. She was 30 years old. There are no words. There is one, though. How long?" — Simonyan wrote on Telegram.

There is no need to remind how Margarita Simonyan and her husband Tigran Keosayan feel about the very ideas of Eurasianism, of which Alexander Dugin was an adherent. Especially if we consider Tigran Keosayan's recent attacks on Kazakhstan and the Kazakhs. Let us also recall that the friendship between Russia and Kazakhstan is precisely the "core" of Eurasianism. And then suddenly Margarita Simonyan forgets about her "ideological differences" with the father of the deceased Daria Dugina and hints that there is need for revenge. Revenge on whom?

It is clear that the notorious "Ukrainian nationalists" were immediately accused of Daria Dugina's murder. And such an accusation was directly made by none other than Denis Pushylin, a protégé of Vladislav Surkov and the Armenian lobby for "president" of the separatist DNR.

The Ukrainian authorities are the ones responsible for the bombing of the car in which Daria Dugina was travelling, Pushylin said. According to him, "Ukrainian terrorists" blew up his car in an attempt to get rid of Aleksandr Dugin. However, instead of Aleksandr Dugin, his daughter was in the car.

"Terrorists of the Ukrainian regime, trying to eliminate Alexander Dugin, blew up his daughter... In a car. My best memory to Daria, she is a real Russian girl!" — Pushylin wrote in his Telegram channel.

Thus one can easily guess who the real masterminds of the crime are. It is precisely those who are most "outraged" and immediately, without any preliminary investigation, point to the "guilty" and call for revenge.

The attack took place immediately after Turkish President Recep Tayyip Erdogan visited Ukraine, where he and UN Secretary-General António Guterres met with Ukrainian President Volodymyr Zelenski in Lviv and, apparently, outlined the preliminary parameters of a ceasefire agreement in Ukraine. But some people need to continue this war, which is disastrous for Russia. And here one of the obvious destroyers is Margarita Simonyan's high-ranking compatriots in Moscow, and she herself among them.

The car explosion with Dugin's daughter could seriously aggravate the situation in Ukraine. In fact, it is another landmark event (along with the tragedy in Bucha) that derails attempts to organise peace talks between Russia and Ukraine, working for the "war party" in Moscow and its external "masters".