Why is Armenia “lengthening” the Zangezur corridor? 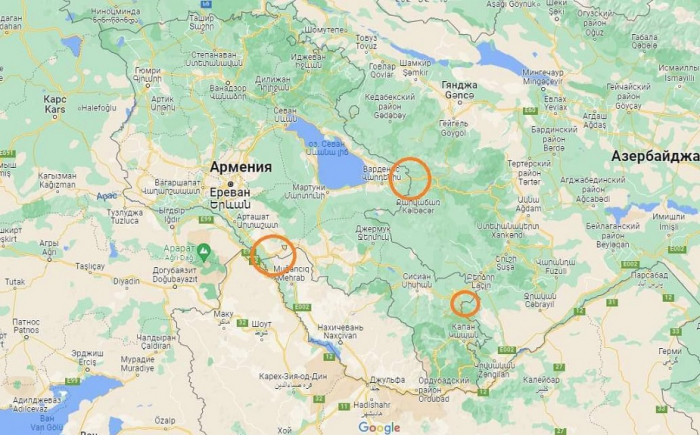 With the start of Russia's aggression against Ukraine, existing transit routes through the South Caucasus were overloaded. The entire flow of goods that used to go from Russia to European countries through its western borders and ports was "redirected" to Turkey via Georgia. As a result, huge truck jams have formed on the only land route connecting Russia and Georgia via Upper Lars, the Georgian Military Road is overloaded.

The further away, the more obvious was the need for Zangezur corridor via Armenia for Russia as an alternative route for communication with Turkey and in general with the "outside world". Despite the fact that revanchists and the Armenian lobby in Moscow hamper the opening of the Zangezur corridor, they are unable to "compensate" losses of Russian business and the Russian state from its absence, and their primitive Turkophobic statements in Russia are already tired of listening.

Armenia itself suffers from overloaded roads through Upper Lars, which is feverishly seeking "alternatives for transit" and has so far been unsuccessful. The project of ferry communication through the Georgian port of Poti and the Russian port of Kavkaz was blocked by the operator of Poti port, the Dutch company APM Terminals.  The operator decided that the ferry service contradicts sanctions against Russia as an aggressor. I.e. by and large the Zangezur corridor turns out to be necessary for Armenia itself, as its opening is the only chance for its side to establish transportation of cargoes to Russia via Azerbaijan. At least, this is obvious to reasonable Armenian politicians, who are aware of deadlock of further "selff blockade" of the country.

Naturally, Azerbaijan and Turkey are interested in the Zangezur corridor. At the same time, the corridor through Armenia is no longer "non-alternative" for Azerbaijan. Azerbaijan, in accordance with an agreement with Iran, has already begun construction of the first bridge over the Arax River, which will provide an alternative route for communication with Nakhichevan bypassing Armenia. However, Azerbaijan also needs the implementation of the shortest link through Zangezur.

Turkey is also negotiating with Russia to open the Zangezur corridor.  "The opening of this corridor will give us an advantage in terms of gaining access to Azerbaijan, and from there to Central Asian countries, to increase trade volumes. High level talks with Russia to open the Zangezur corridor are ongoing. We expect the corridor to open in the very near future," Turkish Deputy Minister of Trade and Head of the Customs Department Reza Tuna Turagay said recently.

However, one of the key issues is still the 'extraterritoriality' of the Zangezur corridor. Armenian nationalists protesting against the corridor claim that this would "cut Armenia off from Iran".

Thus, ideally for cargo transit the Zangezur corridor should be extraterritorial, without "customs barriers" from the Armenian side and the shortest in length. After all, from the Armenian side, goods and commodities are still being brought into Azerbaijan's Karabakh zone of responsibility of Russian peacekeepers, bypassing Azerbaijani customs and also using the shortest route via the Lachin corridor. No one is forcing Karabakh Armenians to travel to Khankendi by making a "detour" through Gazakh, Ganja and Aghdam.

Armenia, while formally opening the Zangezur corridor, does so in such a way that its "extraterritorial status" similar to that of the Lachin corridor would be unrealizable.  It does it simply: it opens crossing points so that communication between Nakhichevan and main territory of Azerbaijan goes "for as long distance as possible" through Armenian territory.

Thus, the Armenian media report that in accordance with the assignment of the Prime Minister of the Republic of Armenia, the NSS proposes the creation of three new checkpoints on the "Armenian-Azerbaijani state border".

1. "Sotk" ("Kelbajar") Gegharkunik region, from Sotk (Zod) community to the state border of the Republic of Armenia, M11 highway (Kelbajar region of Azerbaijan)

3. "Karahunj" ("Eyvazly") Syunik region of the Republic of Armenia, about 7.5 km south of Karahunj community, south-east of the M2 highway: by car to the border of Azerbaijan in Lachin or Zangilan districts.

A close look at the map shows that the above checkpoints are located so that the road through Armenia between the main territory of Azerbaijan and the Nakhijevan Autonomous Republic does not follow the shortest route at all. After all, logically the checkpoints should have been opened for transit traffic on the southeastern or eastern borders of Nakhichevan, and in this way Nakhichevan would have been connected to Zangilan or Lachin by the shortest route.

But the authorities in Yerevan would organise an "entry" into Nakhichevan from the north-east. Thus, organising the connection by two roads on one side passing by Lake Gokcha (Sevan) and, on the other, through almost all of Zangezur and through, so far under Armenian occupation, the enclaved Azerbaijani village of Karki (near Yeraskh).

This artificial 'lengthening' of the route of the Zangezur corridor makes its extraterritoriality unlikely. Certainly, if Armenian customs and border posts appear on this highway connecting the 'ends' of the corridor, Azerbaijan would have to set up similar posts in the Lachin corridor. However, it appears that Nikol Pashinyan is prepared to 'sacrifice' the 'Artsakh separatists', knowing full well that he is unlikely to be able to extend the stay of Russian peacekeepers in Karabakh after three years.

However, the "lengthening" of the Zangezur corridor makes the risk of terrorist attacks and sabotage very likely, since there will not be enough Russian peacekeepers for the entire route. The ranks of peacekeepers have already been "thinned" due to the fact that Russia has redeployed a significant number of them "to the Ukrainian frontline". As a result, there are questions about the security of communications along the route. And this situation, given the tendency of Armenian nationalists and revanchists to terrorise, dramatically increases the risks to the operation of the corridor. Especially for Azeri and Turkish vehicles.

Apparently, those who intend to "blackmail with terror" the movement along Zangezur corridor insisted on its artificial "lengthening". However, Yerevan must realize long ago that the time, when one could dictate terms by terrorism, is hopelessly gone. If Armenia wants to be at peace with its neighbours, it must give up this policy.