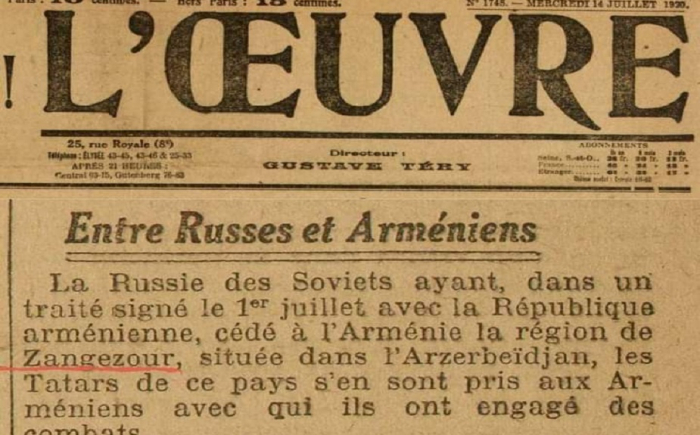 The transfer of Azerbaijan's ancestral land, Zangezur, from Azerbaijan to Armenia, which ended in tragedy for hundreds of thousands of Azerbaijanis and "cut into pieces" both Azerbaijan and the Turkic world in general, still raises many questions. The main one is who was the main external "initiator" of such a transfer and what goals he ultimately pursued.

After the establishment of Soviet power in Azerbaijan, in April, 1920 the troops of Soviet Russia gradually occupied the whole territory of Azerbaijan, including Karabakh, Zangezur and Nakhichevan.

Armenian nationalists and historian falsifiers for some reason claim that these territories allegedly were "disputed" then, forgetting to mention that, in general, the appetites of the then first Republic of Armenia were such that in Yerevan the entire southern Georgia, including Tbilisi (Tiflis) and the entire east of Turkey, including Erzerum, Van, Trabzon, and many other Turkish, Georgian and Azerbaijani lands were considered "disputed". Indeed the border between then already Soviet Azerbaijan and Dashnak Armenia had not yet been clearly defined. Neither were its borders with Georgia and Turkey.

Having occupied Azerbaijan, including Karabakh, Zangezur and Nakhichevan, the Red Army came into "military contact" with the troops of Dashnak Armenia and a "border definition" was required. This, in fact, was determined on August 10, 1920 in Tiflis by delegations of Soviet Russia and the Republic of Armenia.  An agreement was signed according to which Karabakh, Zangezur and Nakhichevan were recognised by Armenia as part of Azerbaijan and placed under Bolshevik control.

However, before this, in July, early August, in fact, there was a "sluggish war" between the Red Army and the Armenian Dashnaks. On July 14, 1920 in French newspaper "L'Œuvre" at the same time there was written about giving Zangezur to Armenia from Azerbaijan by Bolsheviks. Meanwhile, it must be taken into account that Armenia was not yet "sovietized". I.e. it turns out that Bolsheviks "ceded" Zangezur to their enemies. After all, Dashnak Armenia was considered an ally of Entente, with which Soviet Russia was fighting on other fronts - against Wrangel in Crimea and against Poland. The French publication hypocritically accuses the Azerbaijani population of attacking Armenians.

The article notes: "Soviet Russia, under a treaty signed on 1 July with the Armenian Republic, ceded the region of Zangezur located in Azerbaijan to Armenia. Therefore, the Tatars of that country attacked the Armenians, with whom they fought". That is, the genocide of the Azerbaijani population by Dashnak gangs, in Zangezur, in which the future Nazi criminal Garegin Nzhdeh also took part, is presented as "an attack by Tatars on Armenians". The French also make the victims the perpetrators. The French used the same approach in the post-World War II genocide in Algeria, where over a million and a half civilians were killed.

Allegedly, with "cession" of Zangezur to Armenia, exactly in July, 1920, even more questions arise, if we consider that historians today don't know any official agreements, dated July 1, "delimiting" Soviet Russia (and already "Soviet" Azerbaijan, which it occupied at the time) with Armenia. Neither do Armenian historians, who would definitely "grasp" such a treaty in order to "justify" their claims to Zangezur. There is official agreement signed at Tbilisi at August 10 of the same year, by which Zangezur (like Nakhichevan and Karabakh) remains as a part of Azerbaijan. So something had to happen in July and early August of 1920, which neither western, soviet nor Armenian historians love to remember today.

The fact is that July 1920 was the "peak" of the confrontation between Soviet Russia and the Entente. Moreover, the "Polish front", was the most serious for the Bolsheviks, which diverted the most forces. Poland was helped most by France, to the extent that the Polish forces were in fact commanded by French military advisers.

July and early August 1920 saw a massive Red Army offensive against the Poles. At the beginning of July 1920 the Polish government turned to the Entente Supreme Council for support. The Entente countries conditioned their support to Poland on the withdrawal of Polish troops to the so called "Kerzon line" (corresponds to the present day eastern border of Poland), defined by the Soviet in December 1919, as the eastern border of Poland. On 10th July 1920, Poland agreed to recognise this line in the hope of receiving much-needed support from the Western powers.

It turns out to be somewhat strange. "On the Polish front" the Reds are advancing and, supported by the Entente, Poland is making concessions. At the same time, in the South Caucasus, Armenia, supported by the same Entente, "wrests" Zangezur from the Reds, with their consent, and this is reported by the publication of France, essentially the main Entente power.

Undoubtedly Dashnak gangs were penetrating to Zangezur during all 1920. And "giving of Zangezur to Armenia apparently can be considered not interstate agreement but agreement at the level of "field commanders" between Red army and Dashnak gangsters about "delimitation". At the expense of the peaceful Azerbaijani population, who found themselves defenceless against the Dashnak bandits (after all, the army of independent Azerbaijan no longer existed and the Red Army, occupied mainly by the "Polish front", essentially "withdrew" from defending the newly "Sovietised" regions of Azerbaijan).

As for the article in the newspaper "L'Œuvre", to all appearances we are dealing here with "wishful thinking". And, judging by the pro-Armenian tone of the publication, it is "desired" by the same France and gives away the same French plans. Probably, the project of "Zangezour corridor" for Armenia had matured in France approximately at the same time, when they became convinced of how useful the "Polish corridor" is for them.

By 10 August, when the Bolsheviks signed the agreement with the Dashnaks in Tiflis, the Red Army was already standing near Warsaw. Britain had effectively stopped providing military and economic aid to Poland, and Germany and Czechoslovakia had closed their borders with Poland. Basically, the defeat of Poland would have been unavoidable had it not been for the military aid of France and the USA that was coming via the so called "Polish" or "Danzig corridor", the area connecting Poland with the Baltic Sea and "tearing up" the territory of then Germany (whose population was pro-Soviet and even in Danzig (Gdańsk) German workers refused to handle military cargoes for Poland).

The Danzig corridor would still play its tragic role - as a pretext for the outbreak of World War II, in which in 1939 the western allies, the same France, would "surrender" Poland to Hitler.

August 10, 1920 is actually a very significant date. On the same day a treaty was signed in France, in the Paris suburb of Sèvres, between the Entente States, including the newly formed states considered "pro-Antente" (Poland, Armenia, Hijaz, etc.) and the Ottoman Empire, which had lost World War I (or more specifically the Sultan government in Istanbul, which by then had become complete proxies for the Entente and had no control over most of Turkey). It turns out that the future "borders" of Armenia were then defined. In defining which, on the Western side of the Sèvres Treaty, the same France was involved.

Everyone remembers well what happened to the western borders of "Greater Armenia". As for the eastern borders, it was interesting.

The frontiers were determined after Soviet Russia suffered a crushing defeat at the hands of Poles (or, in fact, the French) at Warsaw on August 16, 1920, and started rapidly retreating to Minsk. Soviet Russia concluded an armistice with Poland in the autumn of that same year, 1920 (had it not been for the "advice" of the French, there would have been no armistice). As a result, the Reds were able, on the one hand, to defeat Wrangel in the Crimea and, on the other, in December 1920 began "Sovietisation" of Dashnak Armenia, which had suffered a crushing defeat at the hands of Turkey.

As of December 1920, Soviet Russia had stabilised on the "Polish front", but a peace treaty with Poland had not yet been signed.  In fact, it was well understood that this would be a treaty with the main "sponsor" of Poland at the time, France. In the South Caucasus, the "favourite French brainchild" of Ararat Armenia was figuratively speaking "horns and socks". However, the French were playing a "long game" at the time and were creating " boundary zigzags" with a view to the future. The "Polish corridor" had already helped them, and they had a direct interest in the Zangezur corridor controlled by Armenia. By the way in 1919 when Entente de facto occupied South Caucasus the British not only did not give French the special "exit" to Arat Armenia, but tried to stop the terror of Dashnak gangs in Garabagh of Azerbaijan as well. Therefore it is not excluded that Bolsheviks "gave up" Zangezur even to the Soviet Armenia, but mainly at "secret requests" of the same France. At the same time they solved their "tasks" of "geographical division" of the Turkic world, despite the initial "friendship" of Bolsheviks with Kemal Ataturk.