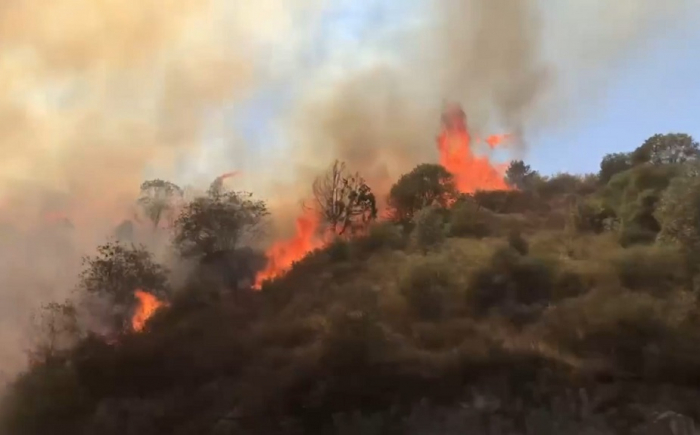 In recent days, hot, dry weather in the eastern part of the South Caucasus has established and the fire danger has increased sharply. So far there are no mass forest fires, except in one area. It is the Lachin district of Azerbaijan, more specifically the area of so-called "Lachin corridor", which since August 25 this year returns to full Azerbaijani jurisdiction.

The arson of forests has begun after the separatist functionaries from Khankendi have arrived in Lachin and surrounding villages and have told that this territory since August 25 passes under the full control of Azerbaijan, and the Armenian resettlers living there for the present are offered to move to the zone of responsibility of the Russian peacekeepers. At the same time, it was strictly forbidden to burn houses (seized from the Azerbaijanis who had been expelled from their homes 30 years earlier). Those who burned someone else's house were threatened with not being given financial assistance or housing in the new location.

"The residents of the village of Aghavno, which the "Artsakh" authorities plan to hand over to Azerbaijan, said they would burn their houses if the handover took place, to which the republic's authorities said that if this happened, those who burned their houses would not receive financial assistance from the state. That is, the authorities want to surrender the village with the houses built to the enemy," the separatist telegram channel Re:public of Artsakh was indignant.

Other Armenian nationalist news resources immediately reacted to this information, with the separatist telegram channel Javakhk being one of the first, posting the following announcement:

"We, the administrators of Armenian Telegram channels, are ready to arrange a fundraiser if the "Artsakh" authorities leave people homeless for not being prepared to surrender their houses, which they have built with their sweat and blood, to the enemy.

We hope that we will be supported by our colleagues and subscribers who care!

Firstly, these houses of Armenian IDPs in the Lachin corridor are not "their own" but have been seized by them from their legitimate Azerbaijani owners.

Secondly, a question arises: when Abkhazia is de-occupied and "veterans" of the Baghramyan battalion are also asked to vacate Georgian "trophy" houses, will the "Javakhi" separatists also raise money for them to burn the houses, but not return them to their legal owners - their fellow Georgian citizens? It turns out so!

One way or another, there is now little "enthusiasm" among Armenians to raise funds to pay "compensation" to looters to burn down Azerbaijani houses. One user even commented on the post by the Javakhk telegram channel:

"To be honest, there is absolutely no desire to transfer money to any funds. I used to transfer half of my salary to various needs, also during the war, but as it turned out after the war, the money reached where it was needed but was not put to use, humanitarian aid also reached Armenia but lay in warehouses. Here, of course, the situation is different. If there was one fund for all, rather than a different one for everyone, where one could monitor the results and at least see what was happening, then there would be no problem.”

Thus, the looters do not manage to burn down an Azerbaijani house and get "compensation" for it at the same time. But there is a desire to do harm and make a nuisance of Azerbaijan. And if one cannot burn a house, then they try to burn the surrounding forests. So that the owners come to the "scorched earth". Hence the mass arson of forests and forest fires in the Lachin district, and unfortunately, the hot and dry weather only contributes to it.

Armenian nationalists and illegal immigrants on Azerbaijani lands once again show their true face. After even the leaders of the "Artsakh" separatists prohibited them from burning down the houses of Azerbaijanis, so as not to embarrass themselves in front of the whole world once again, as they did in Kelbajar, they began to set fire to the Lachin forests.

Although, according to the laws of Azerbaijan, setting fire to forests is a criminal offence and criminals are responsible for it, regardless of their nationality, citizenship, place of residence and "marauding" tendencies. It is not a big problem to "identify" the arsonist when exactly who and where lived in the formerly occupied territories of Azerbaijan. Moreover, the Lachin district is under constant "monitoring" from space satellites and from surrounding heights occupied by the Azerbaijanian army.

Azerbaijan has every right to assess the damage and demand that Armenia, which settled looters and arsonists on someone else's land, compensate them. It also has the right to extradite the arsonists to be criminally prosecuted. If the arsonists move to the part of Karabakh that is still within the zone of responsibility of the Russian peacekeepers, then when the peacekeepers leave after 3 years, the arsonists, if they do not have time to flee, will still have to answer to the law.

Unfortunately, neither the foreign media nor international organisations "see" how Azerbaijan's unique nature - the forests of the Lachin region - is being destroyed. Although "human rights activists" have already appeared, who start shouting about how "long-suffering" people are being evicted from other people's homes. Without specifying when and how these immigrants from Syria, Lebanon and other Middle Eastern countries arrived here and in whose houses they settled, since today they are evicted by their own "Artsakh" functionaries!