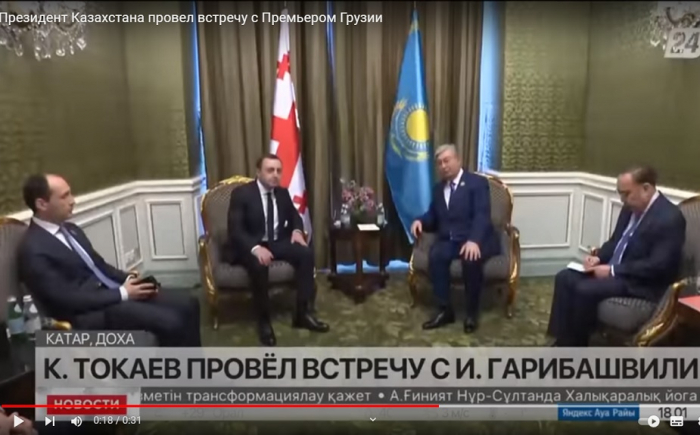 On June 17, 2022 the President of Kazakhstan Kassym-Jomart Tokayev, speaking at the plenary session of the St. Petersburg International Economic Forum together with Russian President Vladimir Putin, to the provocative question of Margarita Simonyan about the "special operation in Ukraine", directly and boldly said that Kazakhstan does not recognize the independence of such quasi-state territories as Abkhazia, so-called South Ossetia, the DPR and the LPR.  After that relations between Putin and Tokayev deteriorated sharply. And immediately, Russia began to hinder Kazakhstan's transit through its territory, above all of oil and grain.

Russian authorities decided to suspend the shipment of Kazakhstani oil in the port of Novorossiysk. The formal reason is that torpedoes and mines from World War II were allegedly found unexpectedly in the waters near the terminal of the Caspian Pipeline Consortium (CPC), where the oil pipeline from Kazakhstan ends. But everyone understands perfectly well that the most direct blackmail of a "recalcitrant CSTO ally, who refuses to support the Kremlin's policy of aggression against sovereign states under the pretext of "protecting" separatists, is going on.

The Kazakh authorities are ready for such a turn of events as transit problems through Russia and are therefore actively building alternative routes. And the main direction of these routes is to the West through the Caspian Sea, Azerbaijan and Georgia.

It is no accident that on 21 June 2022, after Kassym-Jomart Tokayev announced that he would not recognize "independence" of the occupied Georgian territories on the fields of Qatar economic forum the President of Kazakhstan met with Prime Minister of Georgia Irakli Garibashvili.

Kassym-Jomart Tokayev noted the importance of joint work in the transport and logistics sphere, in particular in the implementation of freight traffic between the two countries using the potential of the Kazakhstani ports of Aktau and Kuryk, as well as Batumi sea port.

"I would like to draw your attention to the prospects of developing cooperation in the following areas. In particular, it is to expand the volume of mutual trade. I believe that we could increase the supply of products. Georgia, in turn, has great reserves in terms of increasing supplies to Kazakhstan and other Central Asian countries. We are ready for the closest cooperation in this direction," Kassym-Jomart Tokayev said.

There is no doubt that cargo transit from Kazakhstan through Georgia will increase dramatically in the near future.

However, seeking to be fully independent of transit through Russia, Kazakhstan is thinking of developing transit also through Iran, part of which, again, may go through Turkey, Azerbaijan and Georgia in a westerly direction.

In between trips to economic forums in St. Petersburg and Qatar, Kazakhstani President Kassym-Jomart Tokayev paid an official visit to the Islamic Republic of Iran. Here, at talks with President Ibrahim Raisi and the Iranian leadership, the Kazakh president highlighted the great opportunities in the transport and logistics sector, in particular the Kazakhstan-Turkmenistan-Iran railway link.

Significantly, during this visit, the first overland container train to Turkey via Kazakhstan, Turkmenistan and Iran was welcomed at Tehran station.

Kazakhstan and Iran are also currently focusing on cooperation in agriculture, agricultural trade and transit. It is important to note that during the visit of the President of Kazakhstan to the Islamic Republic of Iran, the Ministers of Agriculture of the two countries signed a memorandum on the supply of grain from Kazakhstan to Iran in the amount of 1 million tons, as well as reached an agreement in principle on the possibility of transit of Kazakh grain to foreign markets through the territory of Iran. All this allows Kazakhstan to further reduce its dependence on transit of grain through Russia.

In fact, Kazakhstan is successfully getting rid of transit dependence on the Kremlin. On the contrary, Kremlin's aggressive policy with regards to its neighbours, blackmailing and "twisting arms" only aggravates Russia's isolation. And it only increases the impact of the sanctions imposed on Russia.