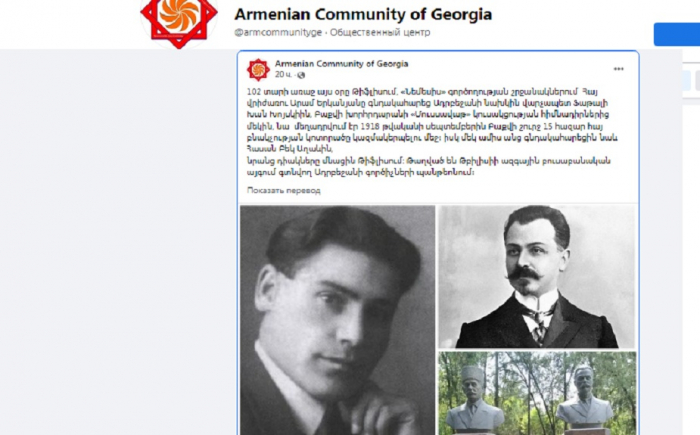 The radical nationalist and extremist Organization, the Armenian Community of Georgia, is once again breaking the laws of Georgia. Recently it held a provocative action on the Didgori field, hanging out a "flag" and voicing the "anthem" of the separatist "Artsakh" in a country which has lost 20% of its territories to separatism. This time, the "Armenian community of Georgia" directly glorifies terrorists and organizers of contracted political murders and thus calls for terror and murder on racial and ethnic grounds.

Azerbaijan, the Azerbaijanians of the world and the Azerbaijani community of Georgia are marking a tragic anniversary - 102 years since the despicable murder by terrorists-dashnaks in Tbilisi of the outstanding Azerbaijani political figures, creators of the First Republic of Azerbaijan Fatali Khan Khoyski and Hasan Bek Agayev. Fatali Khan Khoyski was killed on June 19, 1920. One month later, too, Dashnaks (Armenian terrorists) assassinated Hasan Bey Agayev. They were buried in a Muslim cemetery in Tbilisi.  Their graves are now in the Botanical Gardens, where a pantheon of prominent Azerbaijani figures has been established.

In such circumstances not only justifying but also "glorifying" a vile murder and glorifying murderers means stirring up ethnic discord in Georgia and provoking ethnic conflicts. That with 100% probability can be used by enemies of the Georgian state to organize new aggression, to occupy and seize new territories from Georgia. All the more that the same "Armenian community of Georgia" supports Armenian "Javakhk" separatists who advocate tearing away of the Samtskhe-Javakheti region from Georgia "by the Karabakh scenario".

On the anniversary of the murders of Fatali Khan Khoyski and Hasan Bek Aghaev, the "Armenian Community of Georgia" published material glorifying their murders on its official social media page:

"102 years ago on this day the Armenian vigilante Aram Yerkanyan shot dead one of the founders of the Mussavat party in Baku, former Azerbaijani Prime Minister Fatali Khan Khoyski, who was accused of organising in September 1918 in Tbilisi as part of the "Nemesis" action. He was accused of organising the "massacre of 15,000 Armenians" in Baku in September 1918. And a month later Hassan Bey Agayev was shot, Their bodies remained in Tbilisi, buried in the pantheon of Azerbaijani figures in the Tbilisi National Botanical Garden".

It is clear that justifying the crime, Armenian falsifiers write about some "massacre of Armenians" in Baku in September 1918 (when the city was liberated from the Bolshevik-Dashnak occupation by the Azerbaijani and Turkish armies), which did not happen, forgetting to mention the genocide of the Muslim population of north-east Azerbaijan and Baku by Armenian Dashnaks in May of the same 1918.

It should also be taken into account that Fatali Khan Khoyski and Hasan bey Agayev were political refugees from Azerbaijan, captured by the Red Army, who were hospitably hosted by the then free and independent Georgia. It was not only a despicable murder but also a blow to the image of Georgia. Subsequently, it largely predetermined its occupation by the same Red Army, which occurred largely because of the treachery and betrayal of the Armenian nationalists and Dashnaks, who organised armed mutinies by "calling for help" the Bolshevik occupiers.

The glorification of terrorism and political murders, especially on national or racial grounds, glorification of murderers and terrorists is in itself a crime and a threat to the state security of Georgia, where Armenians and Azerbaijanis live peacefully side by side. Especially today, when under the false pretext of "defending" the separatists, Russia's aggression against Ukraine is taking place, when new Ukrainian territories are occupied, massacres of civilians in Ukrainian towns and villages are taking place and thousands of Ukrainian refugees are forced to flee to other countries from the war and occupation.