Tokayev put Simonyan and the Armenian lobby in their place: Kazakhstan will not recognise the quasi states of the DNR, LNR, Abkhazia and 'South Ossetia' 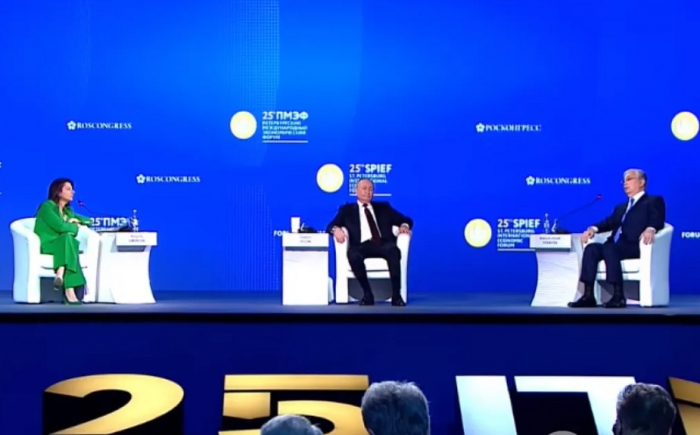 The 25th International Economic Forum in St. Petersburg had "international" status thanks to only one person - Kazakh President Kassym-Jomart Tokayev. He, the only leader of sovereign states, came to the event under Russia's total isolation after the start of aggression against Ukraine. Although the St. Petersburg International Economic Forum used to be called the "Russian Davos", and among the guests and participants of previous years were leaders of leading states and numerous foreign delegations.

And understandably, a lot depended on Tokayev's words. In particular, how Russia's policy is perceived in general by its, so far, formal allies in the EEU and the CSTO.

Margarita Simonyan, the Kremlin's chief propagandist, acted as the moderator, and visually almost the "hostess" of the forum. She sat in a green dress as the "Mistress of the Copper Mountain".

All actions were designed to at least a word, at least a hint to hear from the only guest, the head of the sovereign state Kassym-Jomart Tokayev that he "respects the policy of the Russian Federation" in relation to the unrecognized separatist quasi states or something like that. Simonyan clearly hoped that by doing so at the economic forum even indirect endorsement of separatism would have partially "legalized" transformation of the occupied separatist Abkhazia into "seaside Armenia".

As a result, Kasym-Jomart Tokayev found himself in an ambiguous situation. Any word of support for aggression and separatism would mean that tomorrow Kazakhstan's enemies would begin to spin a "separatist project" in the north of the country and create "people's republics" there and invite a foreign (Russian) army.

But on the other hand, Tokayev as a "guest" of Putin as a president of a friendly state, according to rules of etiquette and diplomacy, is forced to show respect for his host. Even a host who is waging a war of aggression and a policy of annexation towards other neighbours. As a result, any answer to a provocative question, apart from the harsh and unpleasant truth, could be interpreted as a "sensational" statement of support for aggressive ventures of the Russian Federation, and not only in Ukraine but also in the Caucasus, particularly in Georgia.

Margarita Simonyan decided to both gain words of support for separatism and publicly humiliate Tokayev and the Kazakhs. She asked him directly about his country's attitude towards the "special operation" in Ukraine, which began, as we know, with the recognition by the Russian Federation of "independence" of the separatist entities on the territories that were seized from Ukraine. But the result was, as is often the case with exorbitant requests by Armenian nationalists, a "total bummer".

Kassym-Jomart Tokayev, as a professional diplomat, high-ranking UN official and former Kazakh foreign minister, was quick to orient himself and give a clear and comprehensive answer to the provocative question.

"There are different opinions on this, I will put it bluntly. We have an open society, the maturity of civil society is evident," Tokayev said, making it clear that the hosts of the forum would not expect from him personally any words of support for the "special operation", or simply put, the Russian aggression in Ukraine. And then Tokayev clearly and unambiguously, with the legal justification of an experienced international diplomat, said that separatism as such was unacceptable.

" I would like to point out that modern international law is the UN charter. But the two basic principles laid down in the charter have now come into mutual contradiction. These are the territorial integrity of the state and the right to self-determination" said the Kazakh president noting that if the right of a nation to self-determination were to be realised in reality, then instead of 193 UN member states, more than 500 or 600 states would emerge on Earth, which could lead to chaos. For this reason we will not recognise Taiwan, Kosovo, South Ossetia or Abkhazia and it is likely that this principle will be applied to quasi-state territories, which in our view are Luhansk and Donetsk. This is a frank answer to your question.

We would remind you that this was said by the President of the country on whose territory there were Russian and CSTO troops in January 2022. And during the stay of these troops the same Margarita Simonyan directly called not only for intervention in internal affairs of this country, but also for creation of separatist zones in the north of Kazakhstan, hypocritically "worrying" for "rights of Russians and Russian-speaking people". In other words, she was in fact calling for the dismemberment of Kazakhstan.

It is clear, that if in such situation the president of Kazakhstan would answer on provocative questions about separatists and aggression of Russia against neighbours with "diplomacy", it would be humiliation for Kazakhstan and Kazakhstani people. And besides, it is important who exactly asked him such a question.

It must not be forgotten that even greater impudence and rudeness towards Kazakhstan and Kazakh people was allowed by Tigran Keosyan, husband of Margarita Simonyan, in April this year. Kavkaz Plus has already written about his trick in the article "Tigran Keosayan's threats against Kazakhs - the Armenian lobby is leading Russia to ruin! ( http://kavkazplus.com/news.php?id=36230 ).

"Kazakhs, brothers, what kind of ingratitude is this? Have you really decided that Russia is going to evaporate somewhere? Will it emigrate to Mars, or do you think you will emigrate? I am telling my personal opinion of Russian citizen Tigran Edmondovich Keosayan. Look at Ukraine carefully, think seriously. I think that our responsible officials also need to reassess and reconsider the level of relationship. Because, my dears, if you think you can continue to be so sly and won't get anything for it, you're wrong.

Here we are at war. There is a war between two big, big ideas, two big countries and the second country is not Ukraine, but America and NATO. But all other countries, especially fraternal countries have to make up their minds and take sides. As for us, we should take a closer look at who is on our side and who is not. And those who are undecided, who give unambiguously unfriendly or ambiguous signals, well, what can we do, should be classified as our enemies. At least in economic and information doctrines. That is enough, enough, guys, we have played enough in gratuitous help - to save your power in Kazakhstan, to stop your mess". - These are the words of Keosoyan. Meanwhile, his wife, less than 3 months later, in St. Petersburg, "cheerfully and casually" asks a question to the president of Kazakhstan, without even apologizing for her hubby.

And what would have happened if President Tokayev would have spoken "diplomatically" to the question of the spouse of the man who insulted the Kazakhs, and directly related to the most dangerous for Kazakhstan topic of support for separatism? Or simply would not call things by their proper names, so as not to offend President Putin?

In fact, it would have been a capitulation of Tokayev to the Armenian propagandists of Russia and a "triumph" of the Armenian lobby.

Armenian propagandists seemed to count on such a "triumph", believing that Tokayev would not risk to tell the truth directly from such a high tribune. But he said everything, putting to shame both Margarita Simonyan and all the "cunning" combinations of the Armenian lobby to support separatism.