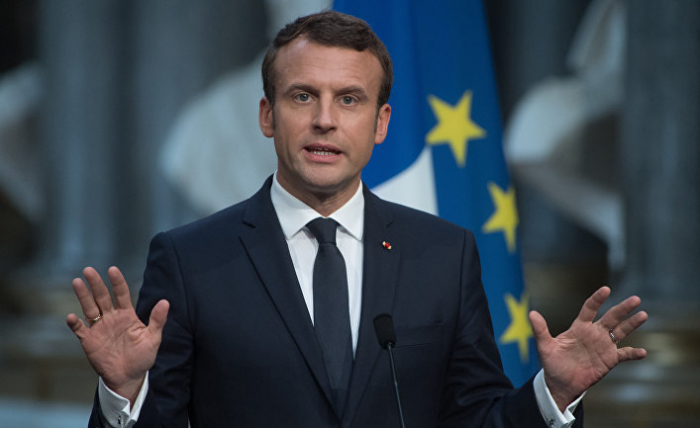 Judging by recent geopolitical trends, France is starting its own global game of "freezing" some conflicts and fomenting new ones. Moreover, there is a clear shift of the "French game" to the south and east - from Ukraine towards the Eastern Mediterranean and the South Caucasus.

Nowadays, French President Emmanuel Macron is keen to act as a "mediator" between Russia and the victim of its aggression - Ukraine. Similar to the one played by one of his predecessors, Nicolas Sarkozy, during the Russian aggression against Georgia in 2008.

As a result of "French peacemaking" by Sarkozy, we should remind you that 20% of the territory of Georgia is still occupied and annexation of Abkhazia and the Tskhivali region is in preparation. However, apparently, the Armenian lobby associated with France is very pleased with such results, which has already turned the occupied Abkhazia into "maritime Armenia".

Macron's words that Russia must not be "humiliated" and, in fact, his calls to "fix" some of the aggressor's territorial seizures after 24 February 2022 caused discontent in Kiev and in many EU countries as well. On 15 June 2022, Emmanuel Macron, reiterated that "at some point" the Ukrainian president and other representatives of Ukraine will have to negotiate peace with Russia, hinting at territorial concessions.

Ukrainian officials are increasingly critical of France, saying it intends to negotiate with Russia at the expense of Ukrainian interests. Kiev is currently rejecting a ceasefire with Russia unless it withdraws troops at least to the line of contact, before an invasion begins on 24 February.

However, to a large extent "with an eye on" France, European countries, above all Germany, are sabotaging the provision of military assistance to Ukraine. Because of this, the Ukrainian Armed Forces currently do not have enough forces for a counter-offensive. In turn, Russian troops are simply "pushing through" the Ukrainian defence in Donbas, taking advantage of their quantitative superiority in armaments, primarily long-range artillery and ammunition.

The strategy of France and the "pro-French" forces in the EU and NATO is clear - by formally supporting Kiev, to achieve maximum exhaustion of Ukraine. The Ukrainian government, mediated by France, should accept an essentially soft surrender, allowing for a ceasefire while maintaining its occupation of some of the territories.

If in Ukraine Macron enters as a "peacemaker" at the expense of Ukrainian interests, in the Eastern Mediterranean he is, on the contrary, on the side of the "hawks". Above all, he is on the side of the Greek military, which, with French support, has not abandoned its intention of seizing Turkish territories. It is about Greek claims to parts of the continental shelf and maritime areas blocking the entire Eastern Mediterranean that belong to Turkey.

Greece is actively armed by France and currently has purchased a number of French weapon systems: fast attack boats La Combattante IIa, III and IIIb, AMX-30 tanks, AMX-10P armoured personnel carriers, Dassault Mirage F1 and Dassault Mirage 2000 fighters. There is also an agreement for France to supply Greece with multi-purpose frigates FREMM, 18 Dassault Rafale aircraft and other weapons at a total cost of 2.5 billion euros. However, while France pays lip service to resistance to Russian aggression, it does not supply Ukraine with a fraction of the weapons it generously supplies to Greece.

With French support, Greek politicians are getting "cocky". This is evident from the verbal confrontation between Turkish Defence Minister Hulusi Akar and Greek MPs in Istanbul during a joint meeting of the Political Committee and the NATO Parliamentary Assembly (PA) Task Force on the Mediterranean and the Middle East.

Hulusi Akar repeated Turkey's demand for Greece to demilitarise islands in the eastern Mediterranean Sea, to which the Greek MPs present reacted emotionally unkindly. The Turkish minister recalled, "You came from so many kilometres away, from mainland Greece to mainland Turkey, violating our airspace. What do you expect from us? There are radar images, we shared them with allied countries. On April 28, we responded to these actions," Hulusi Akar said, saying Greece was "aiding terrorists". (referring to the terrorist Kurdistan Workers' Party).

On June 15, 2022, Turkish President Recep Tayyip Erdogan, speaking at a meeting of the parliamentary faction of the ruling Justice and Development Party (AKP) in Ankara, said Greece was a tool in the hands of anti-Turkish circles. In his opinion, Athens either does not realise this or is willing to play this kind of secondary role. Erdogan did not explicitly indicate who is playing the main role in the anti-Turkish escalation this time, but everyone is well aware that it is primarily France.

Finally, French political circles are still intent on betting on Armenian revanchists and unscathed "Artsakh" separatists, who are "welcome" in Paris. The so-called "speaker" of the self-styled "parliament of Artsakh" Artur Tovmasyan arrived in Paris on June 13, 2022 where he met with representatives of the Armenian community of France and political circles of France.

It is quite possible that the processes of 'reconciliation' according to the French scenario in Ukraine, and the fomenting of conflicts between Greece and Turkey and attempts at a new revanchist war by Armenian nationalists will be instigated simultaneously from Paris. This would "cut" the transit routes through the South Caucasus that are being actively established today, and Georgia would be the first to suffer.  Conversely, through the efforts of France and the Armenian lobby, overland Eurasian transit through Russia or Iran, which traditionally follows French policy, will be promoted.