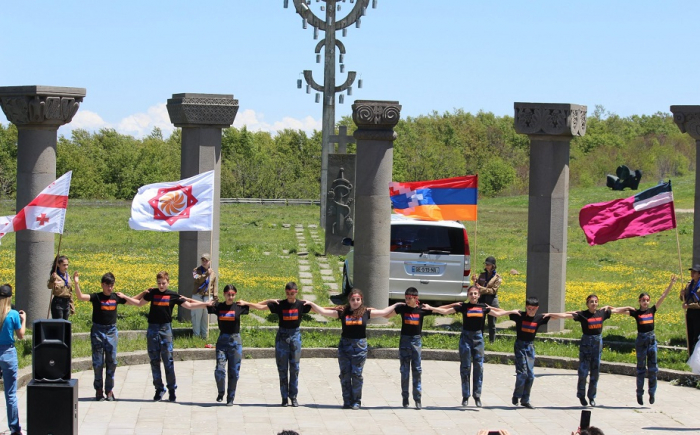 Georgia's Independence Day celebrations this year took place in a complex geopolitical environment. Using the support of the separatists from the DNR and LNR as an excuse, Russia unleashed a bloody war in Ukraine. Once again it became obvious that separatism is an unambiguous evil, and in a country which has lost 20% of its territories to separatism and has over 300,000 refugees, this is doubly obvious.

The flag of the "Artsakh" separatists, liquidated by the Azerbaijani army during the 44-day war, on Georgian soil and in such a historic place is a well-thought-out provocation. And the place was not chosen by chance - Armenian historical falsifiers are now trying to present Didgori fight exclusively in Islamophobic and Turkophobic way. Incidentally, in this battle, the main force of the Georgian army were Kipchak Turks, invited to Georgia by David Agmashenebeli. For a long time, Armenian "historians" tried "to ignore" this against the background of mythical "great Armenian battles and victories".

Today, Armenian provocateurs are trying with all their might to "sugarcoat" the battle of Didgori, passing it off as alleged "confrontation between Christians and Muslim Turks". At the same time, of course, they consider themselves, the "great Armenians", to be the "main Christians".

Armenian historians forget to mention that David Agmashenebeli fiercely fought the Armenian monophysite heresy. He, in particular, liquidated and annexed to Georgia separatist "possessions", whose rulers converted to Armenian monophysitism, and convened the Russo-Urbnisian church council to fight against the Armenian heresy.  Armenian "historians" are also not at all confused by the fact that none of the historical accounts of this battle mentions a single Armenian among the participants in the battle.

All the chronicles indicate that the victory was won thanks to the Kypchak-Türks, there is evidence of participation of Ossetians and about 100 knights-crusaders on the Georgian side in the battle, but there are no "great and ancient Armenians". Although Armenian maps describing the times only a few decades before the Battle of Didgori show some huge Armenian "kingdoms", which reached almost as far as the Didgori field.

Strange how it turns out that two huge troops are fighting on the territory of what was supposedly "just" a "great Armenia", while the descendants of the "great and brave", who will claim centuries later that they were almost central to the "Christian solidarity of Georgians and Armenians", are not even on the battlefield.

Provocations with the separatist flag on the Didgori field are ultimately directed against Georgia. For Armenian nationalists, 'Artsakh', as they call Azerbaijani Karabakh and 'Javakhk', the Georgian Samtskhe-Javakheti region they claim, are linked territorial claims.

At one time, the "Javakhk" direction of Armenian aggression at the Dashnak congress lost only 1 vote to the "Artsakh" direction. It is no less interesting where the Armenian nationalists intend to draw the northern borders of their separatist "Javakhk". And in their opinion, they must go through the Didgori field where they hoisted the same separatist "Artsakh" flag this year.

The fact is that Didgori Field is near the ancient Georgian town of Manglisi, which together with the entire Tetritskaroi district and adjacent lands Armenian "historians" also rank as "great Armenia" along with Samtskhe-Javkheti and Tsalka district of Kvemo Kartli. For them it is "the original Armenian province of Mangleats Por".

By flying the separatist flag of "Artsakh" on the Didgori field, which the Armenian nationalists consider "Armenian lands" along with neighbouring Manglisi, they are laying claim to these ancient Georgian territories. And there is no doubt that at any moment (and in the current complex geopolitical situation, given Russia's dependence on the Armenian lobby, it can appear unexpectedly) - will claim them.