The border of the Russian Federation with occupied Abkhazia will be erased - will the annexation be quick and without "formalities"? 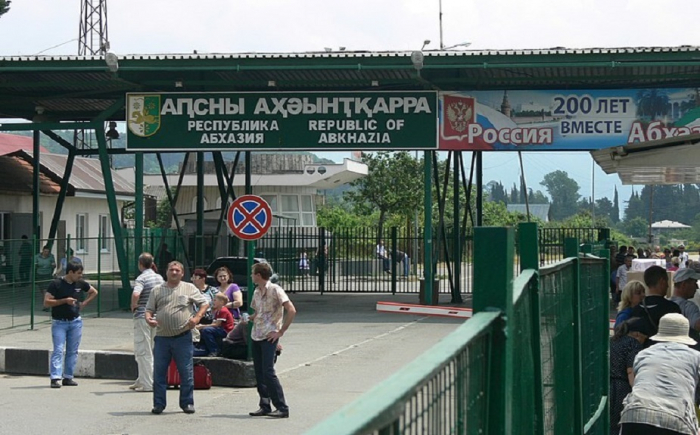 In the course of their aggression into Ukraine, the Russian occupiers are simply going to annex the seized Ukrainian lands "by the fact of control", having already started handing out Russian passports in Kherson and Zaporizhzhia regions. That is, there will most likely not even be fake "referendums" and the creation of separatist entities as "intermediate stages". As a result, it has already become clear that there will be no "ceremonies" and "formalities" with the separatist regimes in Sukhumi and Tskhinvali in case the decision to annex these already occupied Georgian territories is taken.

Perhaps with the takeover of Abkhazia by the Russian Federation everything will go not only without "referendums", but even without informing the separatists themselves about the impending annexation - no matter how much the Abkhazians might resent it. All the more that Armenians, who already outnumber Abkhazians in Abkhazia, are clearly in favour of complete and final annexation of this land.

That is how one should understand words of the Chairman of the Russian State Duma Committee on CIS Affairs, Eurasian Integration and Relations with Compatriots Leonid Kalashnikov who on May 25th, 2022 (the day when Putin signed an order to distribute Russian passports in the occupied Kherson and Zaporozhye regions of Ukraine) simply said that the border checkpoint on the Russian border with occupied Abkhazia should be eliminated and the border "erased".

On this day a meeting was held in the Russian State Duma in Moscow on the issue of facilitating crossing of this border and a number of members of the separatist "parliament of Abkhazia" and the puppet head of the separatist "Foreign Ministry" Inal Ardzinba were "summoned" to this meeting. From the outset, the masters made it clear to the puppets that they "got greedy" and that the border that had become a source of corrupt enrichment of the puppet authorities of Sukhumi would be simply abolished "as being of no use". And in the future, most probably, along with formal "independence" of Abkhazia.

The fact is that the Psou border and crossing point has become a "feeding trough" for the separatist authorities. Complaints of extortion by the separatist "border guards and "customs officers" are increasingly coming to Moscow. And not only from Russians. The separatists have become so impudent that they demand a "bribe" for crossing the border with goods from the real "masters" of Abkhazia - Armenian businessmen.

We should remind you that the Armenian lobby has long been in full control of the economy of the separatist Abkhazia and neighbouring Russian Krasnodar Krai. Naturally, "seaside Armenia" could not leave such "impudence" of the separatist Abkhazian officials and customs officials unpunished for a long time. In the end, the Armenian lobby decided that it was time to end with "the independent Abkhazian state" and it "brought it" to relevant figures in the Russian State Duma.

Therefore, it is no coincidence that Leonid Kalashnikov said after his meeting with the separatists that the Psou crossing point on the border between Russia and Abkhazia should be eliminated.

"We were talking about the Psou crossing point on the border between Abkhazia and the Russian Federation due to the fact that the problem, which has been allowed year after year, has not been solved in any way. We agreed to create a working group, but apart from this special issue, we raised more serious questions - about eliminating this crossing, similar to the way it was done in Belarus," Leonid Kalashnikov told reporters.

The most interesting thing is that the formulation of the issue was unexpected for the separatist "foreign minister" Inal Ardzinba. He did not even try to challenge it that day, but began to mumble something "about the creation of a working group that will work to simplify border crossing, not to eliminate the checkpoint".

But in order to make it "clearer" to the separatist leaders that their "independent Abkhazia" is not needed by the Kremlin masters for nothing the separatists were reminded that it's time to finish with their "unique legislation". At the same meeting where the question of elimination of the border was raised, Leonid Kalashnikov stressed that formation of "common socio-economic space between Russia and Abkhazia", based on "harmonization of Abkhazian legislation" should be forced. Simply put, all separatist "laws" should be replaced with Russian ones.

Kalashnikov drew attention to the law adopted in Abkhazia on election of deputies, which, in his opinion, "can discredit the Russian language", as it provides for "compulsory knowledge of the Abkhazian language, as well as stricter requirements for linguistic competence of officials". Thus, all games in "independence" and "uniqueness of the Abkhazian language and culture" were ordered in Moscow to stop. All the more that even Abkhazians themselves will forget their own language very quickly.

We can expect that at some point both so-called South Ossetia and Abkhazia will be liquidated by the occupants, and these Georgian lands will be directly annexed and included into the Russian Federation with the elimination of all borders and customs. If they decide to annex Samachablo, it will be added to North Ossetia, which does not have Ossetian identity, but still is a "national" unit of federation "North Ossetia-Alania", while with Abkhazia everything will be much sadder.

In general, Abkhazians can be deported to the east of Russia, as, for example, today they are deported from the occupied regions of Ukraine. But even if they are left in Abkhazia, they will still be a small minority in the sea of Armenian settlers.

In order to understand what awaits Abkhazians at best one need only look at the fate of their relative Shapsugs. Most of Shapsugs as well as other Circassian tribes were subjected to genocide and expulsion in the years of the Russian Empire, while a small part was left behind and their descendants still live in the Greater Sochi area.

Is anything heard about Shapsugs having their "government" in their homeland, developing culture, maintaining their identity? No, these people are rapidly assimilating and disappearing. The same, if not worse, will happen in the event of annexation of Abkhazia by Russia to the Abkhazian ethnos.