The adequacy of a refugee from Sukhumi angered Putin 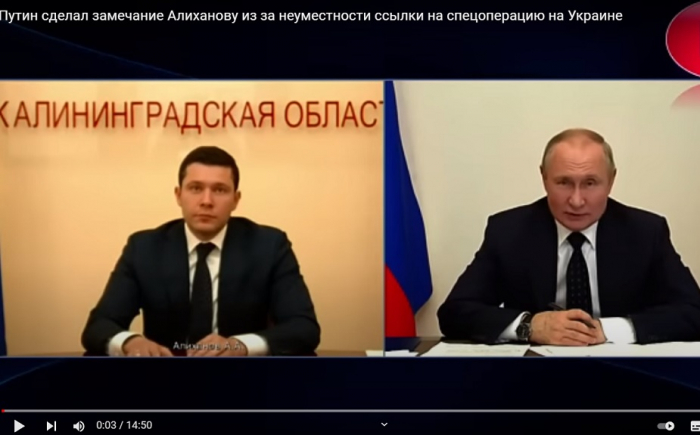 In the Russian Federation, propaganda has accustomed the population to stories where the "great and wise ruler" Putin holds online meetings with officials and regional leaders. As a rule, officials and governors complacently tell how the "great one's" instructions are being carried out and what new "victories" they lead to, while Putin gives further, no less "wise" new instructions.

However, the embarrassment happened during one of the last online broadcasts, where the governor of the Kaliningrad region, Anton Alikhanov, complained during his report about the objective difficulties of the region after the start of the Russian aggression against Ukraine, in particular about the decline in construction.

The fact is that the region is cut off from the main territory of the Russian Federation and borders by land only with Lithuania and Poland, these borders have been closed since the outbreak of war, communication of Kaliningrad region is possible only by sea or by air and that by "circling" the air space of neighbouring countries and making a "detour" over the Baltic Sea. The construction industry itself, being deprived of supplies and materials from across the land border, has come to a virtual standstill. Alikhanov very correctly made it clear that the exclave region was blocked precisely because of Putin's military adventure - he did not call the aggression aggression, but only a "special military operation", but clever people understood it very well.

"Do you have cuts in the construction sector?" said Vladimir Putin to Anton Alikhanov and heard something he did not expect to hear: "Given the current moment, due to the special military operation, transport routes have been disrupted, transit through the neighbouring countries has been disrupted," Alikhanov replied and went on about the problems with gas supply to the region.

Putin was angered by Anton Alikhanov's complaints and it was immediately obvious that the "great ruler" was not used to unpleasant news in anything that called into question the "wisdom" of his decision on aggression.  Vladimir Putin made it very clear to everyone that he was very unhappy with Alikhanov's reference to the "military special operation" in Ukraine in a negative way: "Our special operation should not be referred to in this case". To Anton Alikhanov's attempt to justify himself, he further stressed: "No, you did it. But you don't need to do that, you had a decline [in construction] back in 2020 and 2021. The special operation had nothing to do with it. That reference was not very appropriate."

Vladimir Putin has instructed all Russian officials regarding the war in Ukraine - there must be either "victory reports" or silence.

Interesting is the personality of Anton Alikhanov, a man who, for the first time since the invasion of Ukraine by Russian troops began, has tried to convey to the first person, albeit gently and indirectly, objective information about the disastrous consequences for Russia of this adventure. This is a man who has experienced first-hand the perniciousness of the Russian leadership's policy of supporting separatism and redrawing borders, which ultimately led to the current Ukrainian tragedy.

Anton Alikhanov is one-quarter Georgian and a refugee from Abkhazia, from Sukhumi. He left his hometown when he was a child and fled from the arbitrary rule of the separatists. His Georgian wife and relatives also suffered ethnic cleansing by the Georgian population of Abkhazia.

Anton Alikhanov has made a career in Putin's Russia thanks to his talent and ability, but apparently has not found common ground with the powerful Armenian lobby that tightly surrounds the ruler and in fact controls the official propaganda. And this propaganda becomes more and more deceitful and primitive as it does not reflect the truth about the negative consequences for Russia itself of the attack on Ukraine.

Anton Alikhanov has tried at least to hint at Putin's problems in his region after the outbreak of war in Ukraine, characterising him as an adequate and sufficiently brave (as far as it is possible in the current Russian context) person, but at the same time raising questions about his continued tenure in office. It goes against the official propaganda of Simonyan-Keosayan. Surely Putin's "Armenian" friends would have picked a candidate to lead such an important region by now.

But there is just one problem. The issues of the blockade of the Kaliningrad enclave in the context of the ongoing Ukrainian adventure will still have to be resolved, and the Armenian lobby's representatives in the FR are not exactly short of talented managers. They are able to sycophant before the top leadership and report on "great victories". But they are unlikely to be able to find a way out of the difficulties that the disastrous policy imposed on Russia by the same Armenian "friends" is leading to.