Sweden, Finland, the Dashnaks, Kurdish terrorists - what do they have in common? 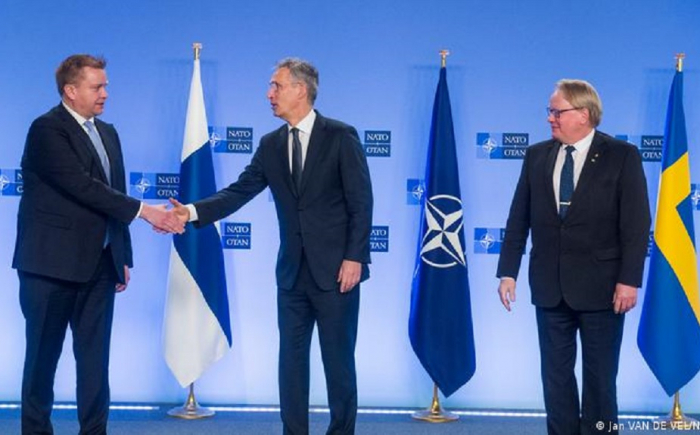 On 18 May 2022, Sweden and Finland submitted their applications to join NATO. Both Nordic countries want to join the North Atlantic Alliance because of Russia's aggressive war against Ukraine. Initially, it was assumed that all members of the alliance would not particularly object to NATO enlargement at the expense of Finland and Sweden. However, Turkey has its own position on the accession of the aforementioned countries to NATO.

On May 21, Turkish President Recep Tayyip Erdoğan made Sweden and Finland a condition for joining NATO, calling on those countries to stop supporting terrorist groups, especially the Kurdistan Workers' Party (PKK). Recep Tayyip Erdogan said in a phone conversation with Swedish Prime Minister Magdalena Anderson that Turkey expects Sweden to take "concrete and important steps" to end support for the PKK, as well as its Iraqi and Syrian offshoots. Erdogan also called for the lifting of Stockholm's defence industry restrictions imposed on Turkey in 2019 because of the Turkish army's actions against Kurdish terrorists in northern Syria and Iraq.

In a phone conversation with Finnish President Sauli Niinistö, Recep Tayyip Erdoğan also said it was "incompatible with the spirit of friendship and alliance" to turn a blind eye to "terrorist organizations" that pose a threat to a NATO ally.

The fact is that the PKK is a "leftist" organisation with Marxism at its core. The first terrorists, who started the terrorist war of "Dashnqtsutyun" and "Gnchak" parties at the turn of XIX-XX centuries not only against Turkey, but also against Russian empire, were just as revolutionary, leftist and Marxist. Moreover, "Hnchak" was a social-democratic organization. It was identical in ideology to the Bolsheviks who seized power in Russia in 1917, on the one hand, and to the social democrats who had come to power peacefully in Sweden and Finland, on the other.

By and large the Armenian and Kurdish terrorists, the Bolsheviks who carried out the red terror in Soviet Russia, the Maoists with their social experiments and the Pol Pot mutilators in Cambodia are "of the same ilk" as the respectable social democrats in power in Sweden and Finland. Who are conducting the same experiment of "leftist reprogramming" of society. In a "peaceful" form, without bloody excesses, but very effectively.

As a result, the close links between Armenian nationalists (the same Dashnaks) and Kurdish terrorists have not only a common dislike for Turkey, but also the fact that both forces are part of a single global "Leftist project", which began to unfold back in the 19th century. The liquidation of traditional empires, like the Ottoman one, was initially seen by its initiators as one of the "stages of the global leftist turn". Therefore, it is understandable the hatred of the Leftists towards Erdogan with his appeal to the Ottoman past of the country.

Today, Turkey is a country where there is conservative resistance to leftist tendencies and the destruction of traditions, than it is a model for traditionalists in many other countries. For example, under Erdogan, so-called "gay parades" have ceased to take place in Istanbul, and the authorities are doing everything to ensure that traditional values are respected in society. And most importantly, Turkey is against separatism, against the "dismantling" of nation states as such and the transition to a new world order where globalist supranational structures and leftist-controlled separatists with their "municipalisation" will decide everything. The Kurdish terrorists want the latter. They are, in principle, even against "great Kurdistan" as a state in the classical sense", they are for the complete dismantling of traditional states and for all the leftist "municipalities" to decide everything on the ground, with total imposition" of sodomite rights.

NATO itself was created to counter the communist threat expected in the West after World War II from the USSR. But initially both the USSR and other communist regimes were only part of a global "leftist project".

The leftist project in the USSR, because of the "revisionism" of Stalin, who began reviving the empire under the communist shell, gradually transformed into a community far removed from both the world revolution and the implementation of the "precepts of the founders of Marxism", and then collapsed. The ideas of Marx-Engels and their "revolutionaries" for the destruction of traditional society were implemented much more successfully and effectively in the supposedly "capitalist" and peaceful countries of Northern Europe, where the Social-Democrats came to power. It was in Scandinavia that the efforts of social democrats built "Swedish socialism" on the one hand, and on the other hand the concepts of the "Swedish family" (and in reality the wildest depravity), and their separation of children from their parents in the form of the juvenile justice system, etc., emerged.

Interestingly, it was no coincidence that the Soviet ambassador to Sweden in 1930-45 was none other than Alexandra Kollontai. This name is somewhat forgotten today, but after the October Revolution of 1917, it was Kollontai, who in 1917-1918 held the post of Commissar of State Welfare (Social Security) in the first Soviet government, was in the vanguard of the radical destruction of the family and the struggle against traditional family values, advocating "free love" and so on. Sweden and other Scandinavian countries went the furthest in destroying the family, which the radicals declared.

In fact, the Dashnaks, Kurdish terrorists and social democrats who built "socialism" in the same Finland and Sweden together with total destruction of the family and complete secularisation of society are all related "leftist forces" who achieve the same goals by different methods. And they have the same global patrons, who more than 100 years ago destroyed traditional empires, and today want to destroy already present states, which do not fit the leftist ideals of the "new world". The communists tried to do it all over the world by force and with great blood, while the Scandinavian builders of the "new world order" succeeded peacefully, but much more effectively. The same Sweden and Finland are "post-family countries", most children are born outside marriage, these countries have a total dictatorship of juvenile justice, which takes children away from their parents at the slightest provocation and gives them either to orphanages or to foster "families", including the so-called " single-sex "). Kurdish terrorists also ruin the Kurdish people by destroying the traditional family, by fighting for "LGBT rights", by imposing feminism that is not typical of the Kurdish people and by driving girls into their terrorist "female" gangs.

As far as religion is concerned, the Nordic countries have some of the lowest percentages of religious people in the world. The "churches" in Sweden and Finland can hardly be called religious institutions, considering that LGBT people (who do not hide their orientation, but promote it) serve as "bishops" and perform same-sex marriages. This is in stark contrast to the countries of the former Soviet Union, where the population, despite many decades of atheist propaganda, are firstly quite religious and secondly strictly adhere to the concepts of the traditional family.

Kurdish terrorists, too, would like to see a general similarity to the current Swedish or Finnish ones with regard to religion. They make no secret of their hostility to traditional Kurdish Muslim values, preaching atheism, feminism, "LGBT rights" and the like.

Despite the very effective implementation of leftist ideology, Finland and Sweden have historically been no strangers to outright Nazism. Finland, for example, fought on Hitler's side, but "switched" to a different camp "in time" at the end of the war, and did not share responsibility for the crimes of Nazi Germany (in particular, its participation in the Siege of Leningrad, which resulted in the death of over 800,000 people from starvation).

In contrast, until 1976, Sweden conducted purely Nazi "eugenic" experiments involving the forced sterilisation of "racially and mentally inferior" persons. In particular, the country passed the "Purity of Race Act" in 1934 and tightened it in 1941. The wave of sterilisation peaked in 1946 and only subsided when the trial of Nazi criminals was concluded at Nuremberg and similar practices were declared barbaric.

Like the Nazis, Swedish "eugenicists" "reasoned" that the "ideal" racial type for Swedes was "tall, blond, with blonde eyes". Those who fell far short of such criteria, such as the Roma, the Sami (Scandinavian natives) and the descendants of interracial marriages were very often sterilised. Formally "voluntary", but in fact, given the psychological pressure on the victims (most of whom were women) forced.

Mentally ill, very poor and socially marginalised people were also sterilised (poverty was seen as a "character trait", inherited as well as antisocial, licentious behaviour). There were 63,000 victims of the "eugenic experiment" implemented on the state level, 90% of them women, and no one was held responsible.

Involvement in the "left-wing project" in Scandinavia does not exclude Nazi crimes as well, all the more dangerous because they are carried out quietly, without too much publicity. It is therefore not at all surprising that "humane" Swedish and Finnish politicians collaborate with bloody Kurdish terrorists.

Despite Sweden's and Finland's rather modest military capabilities on the scale of NATO, their accession to the alliance could fundamentally change its essence. The organisation that was created to fight the global "leftist expansion", through the communist superpower USSR, becomes part of the "leftist project" itself. Especially if Sweden and Finland continue to support leftist terrorist and separatist organisations like the PKK.

The current support of Finland and Sweden for PKK terrorists is therefore worrisome and Turkey quite rightly links the accession of these countries to NATO with the withdrawal of support for such extremists.