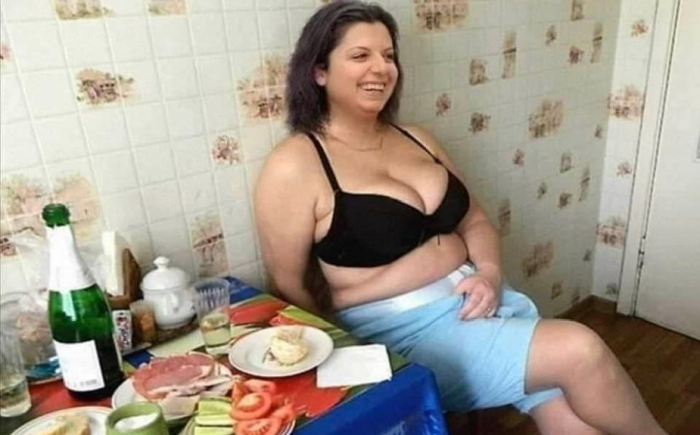 In fact, no other enemy has done as much damage to Russia as the representatives of the Armenian lobby have done. It was they who dragged Russia into a gruelling, debilitating war with Ukraine, making the country an international pariah, bringing Russian statehood to the brink of disaster.

Margarita Simonyan clearly demonstrates the destructive work of the Armenian lobby in Russia. It was she and her entourage from the public of the Armenian lobby who pushed Russia most of all for the adventure of invading Ukraine and promoted the war in Ukraine. She and her "comrades-in-arms" were boisterously proving that they would "take Kiev" and "put an end to Nazism" "in 3 days".

Today, the Russian war machine is bogging down in Ukraine. And Margarita Simonyan says: "I knew that there were 'Nazis' in Ukraine, but I did not know that there were so many of them", stoking an even bigger fire of war. Interestingly, while considering all neighbouring peoples as "savages" and herself as "great", and glorifying Nazi Nzhdeh, she does not regard her own fellow-citizens as "Nazis". Interesting videos have recently appeared on social networks about what Margarita Simonyan is like:

and some more facts:

In order to understand how people like Simonyan came to define Russian policy and ideology, it is necessary to study in depth the methods of work of the Armenian diaspora, led from the USA by the Armenian lobby there.

Having taken part in the collapse of the USSR at the instigation of the US and Western intelligence services, the Russian Federation was pushed towards murderous aggression against Ukraine by Armenian well-wishers "gradually". If, say, in 1992, Russia had started a war with Ukraine over the Crimea or Donbass, the vast majority of Russians would not have supported this war unambiguously. After all, the proximity of the two nations was obvious, and shedding blood, killing civilians for pieces of land where no Russians were forbidden to come and live, seemed to be savage. Just as, incidentally, it seemed savage to Ukrainians and sane Russians at the time that Armenian nationalists were killing Azerbaijani civilians in Karabakh for a piece of land that never belonged to them.

However, even then, Armenian instigators were already "accustoming" Russia to wars with nations close to it. First, with the peoples of the same faith - with the Moldovans for Transdniestria and with the Georgians for Abkhazia and Samachablo. Fake pseudo-state formations were created on the Moldovan and Georgian lands, on the model of "Artsakh" created on the Azerbaijani land with the help of Russian arms. The annexation of Crimea and separatism in Donbas was a "logical sequel" to this policy.  War with Ukraine under this ideology was almost inevitable.

"...To understand the role of the Armenian lobby in the current disaster, we need to answer the questions:

- How was the Armenian diaspora created by the US intelligence services?

- What work does the Armenian lobby do in Russia?

- How did the Armenian lobby disintegrate the USSR?

- What agents of the Armenian lobby, led by Western intelligence services, were implanted in the entourage of the USSR leadership?

- How this agent periodically raised the Karabakh issue to bring down the USSR...

The CIA and Western intelligence agencies knew perfectly well that the national question in Russia meant death to the statehood. They did not stop and with the help of their Armenian "agents" who ruined the USSR, they began to destroy Russia with this question. And to understand the technologies introduced through the Armenian lobby, one should pay attention to how Simonyan and the Armenian lobby agents headed by her work in Russia.

If we analyze their speeches on Russian federal channels, they insult other nationalities living in Russia at every turn. Allegedly, the agent of the Armenian lobby in the US, led by Margarita Simonyan, "loves Russia more than the Russians".

Today Margo Simonian is funded by the state.  She is surrounded by a large number of agents of the Armenian lobby. And they are very successfully sowing enmity between the once fraternal peoples of the USSR.

The Ukrainian war is a clear example of the work of Margo Simonyan and her team. It takes hours just to watch Margo Simonyan, Kurginyan, Bagdasarov, Mirzoyan and other Armenian propagandists working for Russia Today and Sputnik.

There are agents of the Armenian lobby working in all the foreign correspondents of Rossiya Segodnya. How these CIA agents work, can be understood from their coverage of the 44 day war for the liberation of Karabakh. Armenian propagandists claimed that Syrian, Pakistani "jihadists" were allegedly fighting on the side of Azerbaijan and they were "about to" cross or had already crossed the Russian border.

Such matters were handled by Margo Simonyan and her team, directed from the West. The CIA is well aware of the destructive power of the Armenians embedded in Russian state structures and their recruited Russian agents. Members of the Lazarev Club are a prime example. If the activities of these people are deeply researched, it is easy to get on the CIA's trail.

Margarita Simonyan did not accidentally come to the attention of the CIA and the Armenian diaspora. Such children have been led by the CIA since their school years. They were educated in special schools with an English bias on Soros' money. In the tenth grade, she was sent as an exchange student to New Hampshire (USA) for a year under the Future Leaders Exchange programme. Thus the CIA was reinforcing Simonyan's recruitment already in the US.

During this trip, the future journalist, in her own words, developed "some scepticism about democracy and a persistent aversion to American values". In other words, she "developed a love for Russia and became a 'patriot'.  She went to the CIA for recruitment, but "remained a patriot" of Russia at heart, and "deceived the CIA". Who is Margo bullshitting? She was originally a traitor to Russia and is now honestly carrying out CIA assignments.

Margarita Simonyan can deceive ordinary people, but people with little understanding of the methods of work of the security services know how recruitment is carried out and how recruitment is secured. During this trip, Margo found herself in the arms of the US Armenian lobby, which, in turn, is used by the US intelligence services. The CIA explained to her that "you did not come to the US by accident, girl. We have been guiding you since school with the help of the Rostov diaspora and you are our man".

Margot was happy to lie down under the CIA. She didn't even need to be recruited. She was willing to do anything to get noticed by the CIA. Margarita Simonyan was well aware that her biography was already being written by the CIA and her career and well-being depended on the CIA and the US Armenian lobby.

To understand Margarita Simonyan's personality and the level of the CIA's work with her one should look at Margo's teachers.

Next, the CIA and Armenian lobby hone Margarita Simonyan's television skills and send her to Manana Aslamazyan's Internews Television School for training.  This company is also an American company.

Margarita is not a stupid girl. She is well aware that the daughter of a refrigerator repairman does not accidentally open such doors. You have to practise all these gestures. And Margarita Simonyan worked honestly for the US-CIA Armenian lobby.

It's all Margot's time to pay her debts to the Armenian diaspora.

The Armenian lobby continues to assist its agent Margarita Simonyan in opening corpus offices and legal assistance in countries where, with the help and money of Soviet intelligence, they have become entrenched and well positioned.

To show the level of Margarita's connections, let us name some of them.

Gromov has supervised the media in the Kremlin since the 2000s.  He has worked closely with Simonyan since she joined the so-called presidential pool of journalists. That pool had yet to be made.  It was Gromov and then-Presidential Advisor Mikhail Lesin who had the idea of creating the Russia Today media holding company.  It was Gromov who decided to appoint Simonyan to head RT.  Over time Simonyan worked closely with Lesin as well.

To uncover the full picture of Margo's success, one has to study very carefully how Margarita Simonyan got to these connections, who opened these doors for the girl from the provinces.

All smart, real journalists in Russia understand that Simonyan is a project of the Armenian lobby! No matter how much Simonyan disguises herself, everyone understands her true goals. Everyone knows that the resources headed by Margarita Simonyan are in fact causing irreparable damage to Russia in the world; she also destroyed the leading Russian news agency RIA Novosti, replacing it with the scandalous soap bubble Sputnik."

Why has Margarita Simonyan come to the centre of our attention and state-funded attention? Questions arise for Russian society too, why did the state give such advances to a "mediocre" journalist?

This was done by the Armenian lobby with the help of the CIA. However, Russian society has a hard time getting through to the Kremlin, where Margo Simonyan is "under the wing" of influential people. Russian patriots, real journalists know the real reasons for Margo Simonyan's rise. However, they are powerless before Margarita Simonyan's patrons. Today, she has excellent insurance and an impeccably practised line of conduct.

Margarita Simonyan's activities are carrying Russia towards disaster. Russian society and competent authorities should ask Margarita Simonyan: "Whose tasks did you perform? Where is the money allocated to you by the people? Why were you sowing enmity between nations?".

Everyone is laughing at Margarita Simonyan and her projects. Yet there is no power to stop this tank of the Armenian lobby. And there is no telling how much more trouble the US Armenian lobby will bring to Russia...". End of post online.