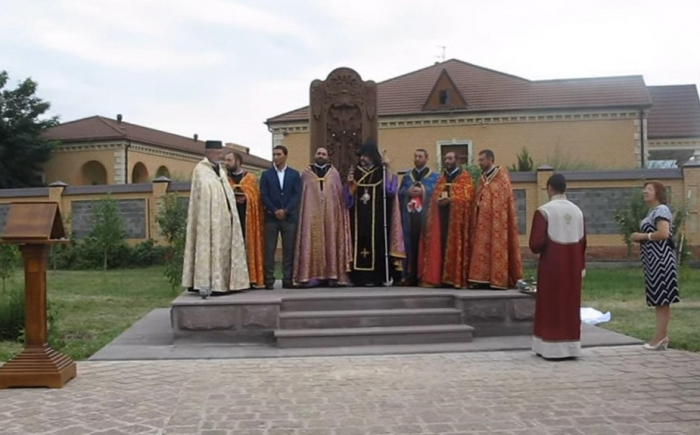 Part of the Armenian nationalists 'felt' that Russia was on the brink of death. It was brought to this situation by the Armenian lobby, which has influenced Russian politics for decades and, most importantly, dragged it into the adventure of aggression against Ukraine.

Instead of saving the country, to which Armenia and Armenians owe their very existence, Armenian nationalists are already starting to lay claims to Russian lands. They clearly intend to participate in the division of Russia, which is perishing through their fault.

This is exactly how the material: "It's time to reclaim what's ours: on the eve of historical events" should be regarded.

Here are excerpts from it:

"...We must be prepared for the return of the Armenian lands, which by the will of history have ended up on Russian territory, to their native harbour.

While the struggle of the country's patriots against a capitulating and traitorous government is taking place in Yerevan, events are taking place outside our country that could have a crucial impact on the entire post-Soviet space. No, I am not talking about the war between Russia and Ukraine, although an awful lot depends on its outcome worldwide.

I am talking about the fact that Estonia intends to seek restoration of its territorial integrity. The Estonian parliament is planning to consider a proposal to the government to withdraw its signature to the 18 February 2014 land and sea border treaties with Russia...

After the occupation of the Baltic states by the Soviet Union, the county of Petserimaa (present-day Pechora district of Pskov Oblast), as well as the Narva suburb, the nearest border settlement, Ivangorod, were taken away from little Estonia. After the collapse of the Soviet Union, Estonia demanded the return of its territory within the borders predetermined by the 1920 Tartu Peace Treaty, but to no avail.

And now, seeing the severe weakening of the Russian army and the obvious political isolation of Russia, Estonia has decided to raise the issue of the return of its lands. And it is very symbolic. Because further events can unfold according to the scenario that no one in Russia could ever have dreamed of. Other states can lay claim to Russia in the same way...

I am not even speaking about Japan and a number of Kuril Islands. Nor am I talking about Koenigsberg-Kaliningrad. But I will speak about Astrakhan, Omsk, Saratov, Tomsk. All of these cities are located on ancient Kazakh territories. And Kazakhstan, with growing weakening of Russia, can very well raise the issue. Luckily, Russian politicians are pushing the enmity toward Russia in Kazakhstan to the limit.

In these conditions we need to do something. "We lost Artsakh, it has to be admitted, practically due to Russia's fault or with Russia's consent. Only a quarter of "Artsakh" is left. But there are heaps of territories in the territory of modern Russia which are associated with Armenians. As you know, in the 18th and 19th centuries, many Armenians came to live in Russia from the Ottoman Empire and Iran - from the territory of historical Armenia, where brutal foreigners were in charge.

They founded new towns and cities, developing lands recently annexed to the Empire, which had been abandoned for centuries. One of the most famous settlements founded by Armenians in Russia is the town of Budennovsk in eastern Stavropol Territory.

The town was founded from scratch in 1799 by Armenians who migrated here, to the waterless steppes, from Karabakh. Budennovsk was originally called Surb-Khach (Holy Cross) in Armenian. It was not named after the Soviet marshal until 1921.

One cannot help but think of Armavir, a large city of 200,000 people in the east of Krasnodar Krai. Armavir was founded in 1839 by the so-called "Circassian Armenians" (Cherkesogai), who migrated from the Circassians who were at war with Russia. The city was named after the ancient capital of Greater Armenia. Another major Armenian city was Nakhchivan-on-Don, one of the largest districts of what is now Rostov-on-Don. But even before 1928 it was a separate Armenian settlement of Nor-Nakhijevan.

List of Armenian cities in modern Russia could go on for a long time. But it is more important not just to remember them, but to be ready for their return to their native harbour. Under certain circumstances, and this is what is going on, as Estonia's actions are also signalling, we must be ready to defend historical justice. This is what we all need to think about now and not to weaken Armenia with internal political confrontation...".

The article deliberately omits mention of the Black Sea coast of the Krasnodar region, including the almost-Armenian Sochi. The fact is that the Armenian lobby still needs Russia to completely "Armenianise" separatist Abkhazia, where there are already many more Armenians than Abkhazians themselves.

Now Armenian provocateurs want to annex Abkhazia to Russia and take away this land from Georgia and unite them with Armenia-occupied coastal areas of Krasnodar Krai, and possibly with occupied Ukrainian Crimea to form one "maritime Armenia".

Armenian nationalists seriously expect that at this stage, on the eve of its collapse, Russia will "collect" lands that are of interest to them. And then they, like vultures, will "grab" this huge chunk when dividing the defeated Russian Federation.

Interestingly, Armenian provocateurs are still dreaming of playing off Russians and Kazakhs. During the events in Kazakhstan at the beginning of this year, Armenian provocateurs, the same Margarita Simonyan hinted that Kazakhstan allegedly contains "native Russian lands. And now they already speak about Kazakh lands within the Russian Federation. The goal is the same - to provoke a conflict and redistribution of borders, and it does not matter in which direction.