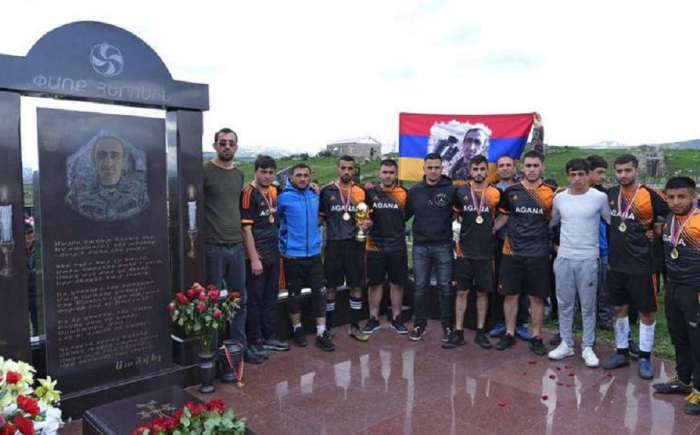 In honour of a separatist fighter killed during the aggression against Azerbaijan in Karabakh, Armenian "Javakhk" separatists in Georgia arranged an entire football tournament.

"A football tournament in honour of a Javakhk hero killed in the Second Artsakh War.

The memorial football tournament in the village Agana came to an end. On May 3 final tournament was held, winners were defined and awarded.

The prizes were distributed as follows:

The memorial tournament was organised in memory of Samvel Hovhannisyan, a resident of Agana village, who died during the Second Artsakh war, as well as Hakob Hakobyan and Jirayr Kerobyan, residents of the village, who passed away prematurely - source Jnews.

It is heartening to see such devotion and deep awareness amongst the Armenians of Javakhk.».

This tournament, organized by the "Javakhk" separatists can be seen as nothing but blasphemous mockery of the country that has lost 20% of its territory to separatism and has more than 300 thousand refugees that still cannot return to their homes. After all, it turns out that in one of the regions of Georgia, a separatist and mercenary, who went to another country to kill and expel its inhabitants, just as Georgians were killed and expelled in Abkhazia and the Tskhinvali region, appeared to be a hero, in honour of whom sports tournaments are staged.

The same tournament organizers do not even hide their claims to ancient Georgian lands and their intention to invite external forces for aggression against Georgia.

Such tournaments in honour of a fallen separatist fighter are nothing but propaganda for separatism among young people and gatherings of future fighters. Right now they are playing football. Then they organise training and education in military affairs and sabotage. And then they will organize an armed insurgency with murders and call in external aggressors.

Are not the tragedies of Azerbaijan's Karabakh, Georgia's Abkhazia and Samachablo, and what is happening now in Ukraine, where the invasion and bloody war started precisely to support separatism, a sufficient warning for Georgia?