Turkey saves Ukraine, but for some reason is rebuked rather than thanked? 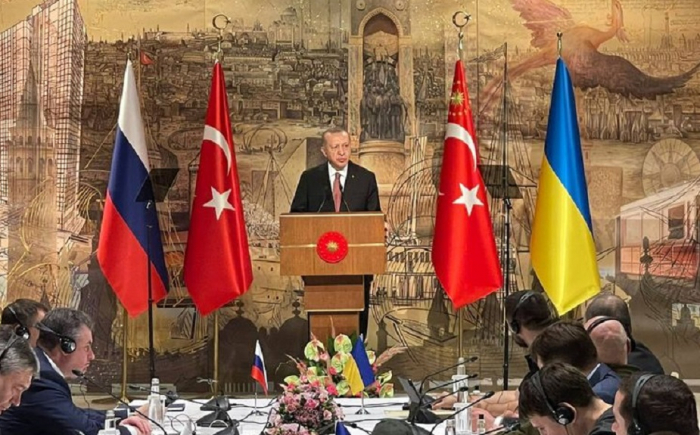 The Russian Federation's aggression against Ukraine has clearly "stalled" not only because of the resistance of the Ukrainian army and people, but because of the determined opposition of the global community. Currently, Turkey's assistance plays a key role in the key moments of Ukraine's resistance against Russian aggression.

And it is not just about the Bayraktar drones, without which Ukraine would be problematic to resist the aggressor's superior forces. It was the Turkish leadership, at a time when the Russian aggressors were at their greatest advance in Ukraine, that organised peace talks on 29 March in Istanbul, at which the sides were close to concluding an armistice.

Ukraine at the time agreed to a very significant compromise to stop the bloodshed - to postpone the de-occupation of Crimea for 15 years. The Russian side, for its part, announced "reduced activity" in the Kiev and Chernihiv directions as a "step to apply", and in reality the withdrawal of occupying forces from the Ukrainian capital.

Those who were in Kyiv at the end of March 2022 noted a dramatic change in the situation in the besieged Ukrainian capital itself, which the occupiers were effectively blockading from three sides. It was from 29 March that the shelling of Kiev ceased, and in the following days Russian occupying forces began to hastily leave its suburbs.

No one knows how many civilian casualties there would have been if the fighting had dragged on in the Kyiv, Chernihiv and Sumy regions. Especially if the aggressors had gone to storm Kiev (and before March 29, this danger persisted, and the occupiers were even planning to move in mercenary fighters from Syria, who had experience in urban warfare). Obviously, if Turkey had not persuaded the Russian Federation to make concessions on March 29 and not to withdraw troops from the Ukrainian capital, tragedies like the mass murder of civilians in Bucha could have occurred in dozens of towns and villages in northern Ukraine.

Unfortunately, the Armenian lobby has since done everything in its power to destroy the timid shoots of hope for peace that appeared after the meeting in Istanbul. Kremlin propagandists of the "most ancient nationality" in Moscow began to cry out for "unacceptable surrender" and "war until victory". Russian Foreign Minister Sergey Lavrov-Kalantaryan began to arbitrarily interpret the March 29 meeting in Istanbul, stating without question that the Ukrainian side had allegedly agreed that Ukraine's security guarantees would not apply to Crimea (i.e. that Crimea would remain under Russian occupation forever). As a result, a real ceasefire was not achieved and intense fighting resumed.

Nevertheless, even under such conditions, Turkey and Azerbaijan are doing everything to make the war and aggression more difficult and costly for Russia and to bend it to a ceasefire. Thus, on April 23, 2022 it became known that Turkey has blocked its airspace, both to and from Syria, for Russian military aircraft. Thus, the transfer of Russian military and weapons from Syria "to the Ukrainian front" became problematic. And following this, Azerbaijan, in support of Ukraine, has also unilaterally closed its airspace to all kinds of military cargo and aircraft flying to and from Russia through its territory.

All this has made it even more difficult for Russian aggressors to move military equipment and weapons from Armenia, Iran and Syria to wage war against Ukraine. As a result, Russian military aircraft carrying military cargo from these countries to Russia are forced to fly over Iran and the Caspian Sea through the airspace of Turkmenistan and Kazakhstan.

And in such circumstances, it was incomprehensible to the Turkish public that, in an interview with the Greek ERT, Ukrainian President Volodymyr Zelenski blamed not only Greece but also Turkey for making money from Russian tourism:

"We believe that this money is earned through blood, and this money is spent from you. The same applies to Turkey. On the one hand, Turkey acts as a mediator and supports Ukraine in important steps, but on the other hand we see that, for example, several tourist routes are being prepared simultaneously. Especially for Russian tourism. We also see it", Zelensky stated.

However, it is unfair and incorrect to put Greece, which does nothing at all to help Ukraine and stop the war in Ukraine, on the same board with Turkey, which is taking real steps to help Ukraine with weapons, to evacuate civilians (the latest example is from Azovstal in Mariupol) and to stop the war.

Turkish officials have not yet reacted to Zelenski's statement, but Dovlet Bahceli, the leader of the Nationalist Party of Turkey (MHP), gave a comprehensive response to the Ukrainian leader. Since the MHP are coalition partners of the ruling AKP, one could say that a message has been sent to official Kiev through Dovlet Bahceli, hinting at who is trying to drive a wedge into Turkish-Ukrainian relations, and also urging them not to follow double standards themselves in economic relations.

"Zelensky should show respect for the Turkish people, the Turkish government and the Republic of Turkey. It would be better if Zelensky trusted the Turkish people rather than Greece... If Zelensky is so determined, maybe he should stop transiting Russian gas through Ukraine to Europe. After all, with the proceeds Russia is at war against Ukraine..." - Bahceli said, commenting on the Ukrainian president's criticism of Ankara in an interview with Greek media.

To add to this, the anti-Turkish statements were renewed after US House Speaker Nancy Pelosi visited Kiev and met with Zelensky. The same Pelosi, who is creating problems for Turkey and Azerbaijan with money from the Armenian diaspora.

When before the war the US and European countries withdrew their embassies from Kiev and offered Zelensky to flee the country, Turkey was firmly on Ukraine's side militarily and diplomatically. The US and Europe were then waiting for Russia's offensive to end and predicted Ukraine's swift defeat.

Just the other day Erdogan's personal credibility allowed some of the people from the besieged Azovstal to be freed and withdrawn. Neither Biden, nor Pelosi, nor any European leader has been able to influence Putin on this issue.

For all intents and purposes, in trying to stop the war in Ukraine, Turkey's role remains key. And this is not to the liking of the very forces that instigated the war. And the Armenian lobby seems to play its part among them. It is no coincidence that open calls for nuclear war first came from no one but the Kremlin's chief propagandist, Margarita Simonyan.