Lavrov-Kalantaryan as 'blood purity expert' and the intrigue of the Armenian lobby around corridors through the South Caucasus. 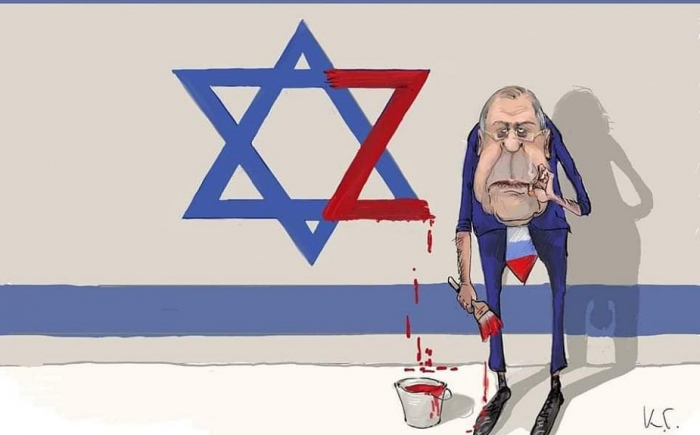 Russian Foreign Minister Sergey Lavrov, who carefully conceals his Armenian origins and the fact that he is a Kalantarian from the Russian public, has made a scandalous anti-Semitic statement that Nazi leader Adolf Hitler allegedly "had Jewish blood":

Sergey Lavrov's statement by Kalantaryan angered both Israel and even Russian Jews. Israeli Foreign Minister Lapid, for example, reacted indignantly: "Foreign Minister Lavrov's statements are an inexcusable and outrageous statement, as well as a terrible historical mistake. Jews did not kill themselves in the Holocaust. The lowest level of racism towards the Jews is accusing the Jews themselves of anti-Semitism.

Yair Golan, deputy minister of economy and industry of Israel, spoke even more sharply: "A shocking, essentially anti-Semitic and deceitful statement. It reflects what the Russian government is really like - a violent regime that does not hesitate to eliminate internal opposition, invades another country and accuses it of reviving Nazism."

However, there are no casual phrases in diplomacy. And a careful analysis of Lavrov-Kalantaryan's essentially anti-Semitic statement suggests that it concerns not only Ukraine and the Jews, but paradoxically for me also the South Caucasus, which is so close to Kalantaryan, including Georgia.

Lavrov's statements about Hitler and the Jews are similar not only to the statements of marginal Western anti-Semites. Quite respectable Iranian politicians voice the same thoughts in their own country against Israel. Since Iran is already under Western sanctions, however, such statements in the West and in Israel, which is in a state of "semi-war" with Iran, have long since ceased to be noticed.

Meanwhile, for the Iranian authorities, the anti-Israeli rhetoric of non-Iranian politicians is something of a "marker". If you "quarrel" with Israel on an issue as fundamental to it as the Holocaust, this means you are willing to cooperate with Iran on other "sensitive" issues.

It is very likely that Kalantaryan deliberately insulted the Jewish people, including Russian Jews, as well as Israel, in order to "curtsy" towards Iran. It is easy to guess why he needs it now.

The fact is that after Russia's aggression against Ukraine and the West's harsh anti-Russian sanctions, the only "transit window" for Russia to the West became routes through Azerbaijan, Georgia and Turkey. As a result, the opening of the Zangezur corridor became super relevant and this corridor is in Russia's own economic interests.

However, Armenian revanchists and Russian Armenian lobby, which actually includes Lavrov-Kalantaryan, do not want opening of the corridor and peaceful agreement of Armenia with its neighbours on the basis of recognition of inviolability of borders. And they need transit routes through Iran as an "alternative" today. This includes the already "buried" North-South project via Georgia, Armenia and Iran.

The supporters of this route want to brutally "force Georgia to transit" by organising new aggression and, if possible, finally dismembering it, achieving the separation of Samtskhe-Javakheti ("Javakhk") and a "corridor" to the sea for Armenia through the territory of trampled Georgia.

But Iran's position is very important for that. Not only does Iran have to quarrel with its neighbours, Azerbaijan and Turkey, against its own interests, but it also has to give up the ultra-advantageous prospect of normalising relations with the US and EU.

Negotiations are already under way to renegotiate the "Iran deal": the removal of Western sanctions in return for concessions on Iran's nuclear programme. At the same time, Russia, one of the parties to the negotiations and taking advantage of this as best it can, is blocking the new agreement. It has already caused dissatisfaction in Tehran, which is also set on "reconciliation" with the U.S. and the EU. All the more so because Iran, if sanctions are lifted, could partially replace Russian oil and partially natural gas on the European market (i.e. Moscow and Iran become competitors).

But in case of reconciliation with the West, Iran will not, by definition, oppose any corridor through the South Caucasus, including the Zangezur corridor. Moreover, it can easily join the transit of its energy resources to the EU through pipelines that run through Azerbaijan, Georgia and Turkey. Not to mention the fact that in this case there will be no special objections from Tehran to the Zangezur corridor either.

In order to destroy such scenarios, where everyone would be happy except Armenian nationalists and revanchists, Lavrov-Kalantaryan appears to have embarked on an anti-Israeli demarche. He will thus try to steal the projected energy bridge from Iran to the EU and "lure" Iran into the transit corridors organised in the interests of Armenian nationalists and "Greater Armenia".

It is unclear how successful this intrigue will be for the Armenian lobby, but Lavrov's anti-Jewish statement has already cost Russia dearly. Israel began supplying weapons to Ukraine just as the Russian offensive in Donbass finally "ran out of steam".

The Israeli arms deliveries to Ukraine have been reported by the Haaretz newspaper, citing its sources in the government. As the newspaper specifies, Israel made this extraordinary decision because it had previously refused to supply Kiev with military aid, sending mostly humanitarian aid. "Such caution was part of a policy aimed at maintaining ties with Russia," the weekly stresses. But on May 3, according to Haaretz, Israeli officials concluded that the country was ready to discuss expanding aid to Ukraine, including military aid.

Estonian Foreign Minister Eva-Maria Liimets also confirmed the information about arms deliveries from Israel to Ukraine. It is known that the Estonian army is armed with Israeli-made Spike NLOS anti-tank missiles and Blue Spear anti-ship missiles. Estonia is expected to supply such missiles to Ukraine with Israel's consent. The Spike NLOS missiles have a range of 25 km and can be integrated into Mi-8 helicopters. Blue Spear is a serious weapon, with a range of about 400 km.

With the "shaky equilibrium" on the front line in Ukraine, any additional arms supplies to the Ukrainian side could reverse the situation and lead Russia to a catastrophic defeat. Then, of course, all the intrigues of the Armenian lobby will instantly collapse. Russia will not care about the South Caucasus, and Armenia is nothing without Russia's geopolitical support.

By playing a very sly game and fomenting xenophobia and ethnic conflicts "out of the blue", Armenian nationalists can not only ruin Russia, as they did over 100 years ago, but also "outplay themselves" once again.