Andranik Migranyan about "status" or why did the "descendants of genocide victims" provoke the massacre in Ukraine? 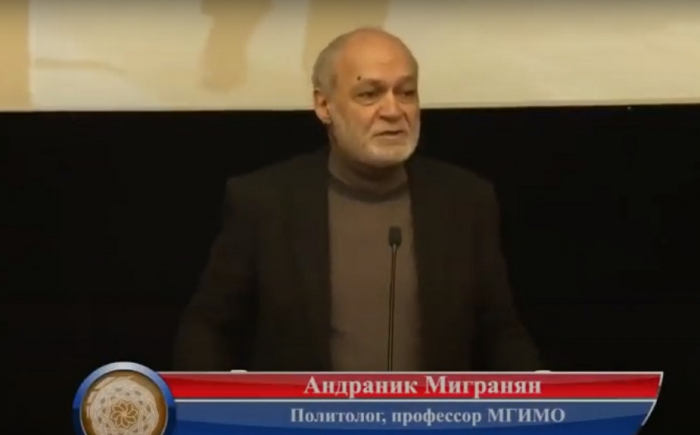 This year the current anniversary of the mythical "Armenian genocide", on 24 April, came at the height of the war in Ukraine. This war was the result of provocation and instigation by the descendants of those allegedly "victims" of the mythical "genocide". Such a conclusion can be drawn from Andranik Migranyan's speech at an event dedicated to this "genocide" organised by the "Union of Armenians of Russia" (UAR).

Andranik Migranyan is not only a fellow villager but also a friend and fellow student of Armenian nationalist Sergey Lavrov (Kalantaryan). Therefore, what Andranik Migranian says essentially reveals the influence of the Armenian lobby on Russian foreign policy.

Andranik Migranyan's tone was clearly "decadent". This is not surprising since the war against Ukraine has failed to "legalise" the redrawing of borders and, most importantly, the legalisation of separatist entities on the territory of another state. This means that the plans of Armenian nationalists to set precedents for the creation of new "Armenian states designed to form a great Armenia" in foreign lands are failing. For them this becomes another blow after the 44 day war and the de-occupation of Karabakh by Azerbaijan.

"We have actually lost the second Armenian republic of Nagorno-Karabakh" stated Andranik Migranyan. But then he clarified what the Armenian nationalists were still hoping for:

"The only reassuring thing in this area remained, admittedly for the second or third time so far unconfirmed, unconfirmed unprompted further, the first assessments by the Russian president; Ironically, not by the Armenian prime minister and leadership, but precisely by the Russian president, who said, and this is his first speech, when he spoke about what happened in the South Caucasus, he said: "Yes, you know? Now we understand why South Ossetians and Abkhaz did not feel confident in their territory and did not see a future for themselves and their children, because they did not have their status."

Despite the catastrophic defeat in the 44-day war, the Armenian nationalists still have the hope to "legalize" the separatist "status" for their pseudo-formations in the Azerbaijani lands of Karabakh. And it was for this purpose that they not only fomented separatist conflicts in Abkhazia and the Tskhinvali region, with the hands of Russia carried out aggression against Georgia and achieved "status" for them - the so-called "independence" which in fact was a cover for the Russian occupation. However, no one in the world, except for 2-3 marginal regimes, has recognised this status.

Andranik Migranian is a rabid Georgiaophobe, and was at the root of the war in Abkhazia. Not only did he, along with other Moscow leaders of the Armenian lobby, "patronise" Abkhaz separatist leader Vladislav Ardzinba, but he also participated in harassment of Abkhazians against Georgians.

Now Andranik Migranian once again brings up the Abkhaz and South Ossetians and says that they could not live "without status". And he bluntly says that this "status" in the South Caucasus is obtained by Russian weapons, which so far has been managed through the Kremlin by the Armenian lobby.

Andranik Migranian hopes for a Russian victory in aggression against Ukraine. Not only to create another precedent of "status" for the separatists, but also to preserve the power of Russia, which will then serve as another "reshaping" of the Caucasus along Armenian lines.

Except that the Armenian people themselves seem to have grown tired of revanchists and war instigators. They voted for Pashinyan, who despite losing the war, gave Pashinyan a mandate to reconcile with his neighbours, which Migranyan also resents.

Knowing the efforts of the Armenian lobby to create "statuses" in the South Caucasus with Russian weapons, we can understand why they pushed so hard for Russian aggression in Ukraine. Especially if we compare dates and events.

By 2020, the conflict in eastern Ukraine had clearly begun to subside. Volodymyr Zelenski won the country's elections in 2019 with 73% of the vote precisely on anti-war sentiment. There was never any talk of "Nazism" when he was elected (despite the fact that Armenian propagandists in the Russian Federation and Lavrov-Kalantaryan are stubbornly trying to prove otherwise). In the autumn of 2020. Armenia suffers a crushing defeat in Karabakh. An attempt to oust Pashinian's government and bring in revanchists affiliated with the Moscow-based Armenian lobby as a result of the war also fails.

That was when "by a strange coincidence" Armenian nationalists in Moscow began to "worry" about Donbass. Margarita Simonyan arrived in January 2021 and delivered a "heartbreaking" speech ending with the words "Mother Russia, take Donbass home". Preparations of the Russian military machine for aggression against Ukraine begin. Russian troops move to the Ukrainian border for the first time in the spring of 2021. However, the invasion did not take place then. Analysts are still unable to give an answer as to why.

According to some political experts, the position of the new US President Joe Biden played a role. For the first time, however, Vladimir Putin listened to him and withdrew his troops from Ukraine. But it is also possible that the Armenian lobby hoped that the summer 2021 early parliamentary elections would bring the revanchists in Armenia, led by Robert Kocharyan, to power. After that, a war with Russian participation was immediately expected to be ignited in the Caucasus. But the revanchists suffered a crushing defeat in the elections.

In the autumn of 2021, despite all the efforts of revanchists and provocateurs, the prospect of opening the Zangezur corridor began to emerge more and more clearly. It became clear that the "Artsakh project" was finally fading into oblivion and could not be reanimated after the opening of the corridor.

Armenian nationalists once again needed a 'precedent for status recognition'. Here, the Armenian lobby most likely decided to go for broke and bet on Russian aggression against Ukraine. And the reason for the aggression was the recognition of the very "status" or so-called "independence" of the separatists of the DNR and LNR and their "declared borders" within the entire territory of Donetsk and Luhansk regions of Ukraine. This is approximately 4 times the amount of territory that the separatists originally controlled.

The massive invasion of Russian troops at the end of February 2022 was clearly in reckoning with Ukraine's capitulation to agreeing to "status" and territorial concessions to the separatists. And this would then immediately give the Armenian nationalists hope that in the same "blitzkrieg", with or without cause, the Russian military would organise for them "Artsakh" on Azerbaijani lands. Within the "borders" delineated by the painful Armenian nationalist imagination.

However, Russian aggression against Ukraine has stalled. The bankruptcy of the Kremlin's policy guided by the Armenian lobby is becoming evident. And those who have defined this policy for many years, the same Andranik Migranyan, look frankly confused and pathetic, as can be seen from his introduction.