...We asked our Georgian friends to close the airspace and they did it.... 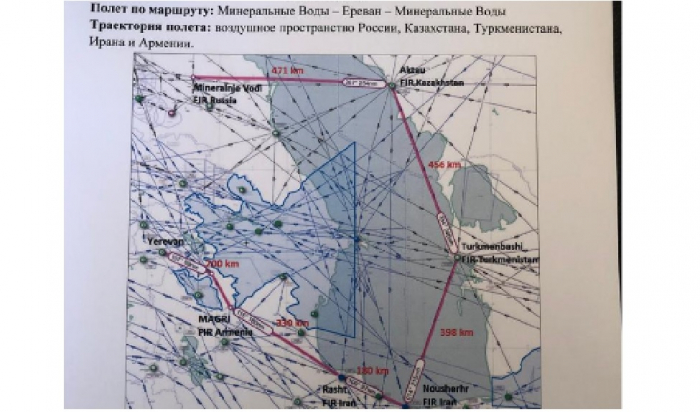 The Azerbaijani President noted that Baku had sent a letter to all the Caspian littoral states at the time asking them not to allow Russian cargo planes carrying weapons into Armenia.

"We sent it to Kazakhstan, Turkmenistan and Iran. Unfortunately, these planes used the territories of these countries when entering Armenia. That was the case, and we don't have to hide that side of the 44-day war. But Armenia's expectations were higher. They thought the Russian army should come, to fight and defend the separatism, but this did not happen," Ilham Aliyev said.

As for the position of the authorities of Turkmenistan and Kazakhstan, countries whose peoples are Turkic brothers to Azerbaijanis, and the Islamic Republic of Iran, a country which is perceived in Azerbaijan as a Muslim brother state, it is worth dwelling on separately.

Certainly the vast majority of Kazakhs, Turkmens and Iranians (over 40% of whom were Azerbaijanis) were unequivocally on the side of the Azerbaijani people. If they had had their way, they would never have allowed military cargoes to help Armenian occupants of Azerbaijani lands. Ordinary residents of the Islamic Republic of Iran, the southern Azeris blocked columns of military equipment at the border of Iran and Armenia, thus forcing "allied" with Yerevan Russia to use more actively the expensive "air" way of delivering weapons to the aggressor. However, the politicians in Tehran, Nursultan and Ashgabat, alas, did not show their best side at the critical moment.

"Allying" with an aggressor, if not stopped in time in crucial areas such as arms supplies or the provision of territory for "military transit", can ultimately lead to the betrayal of friends. The most burning example today is the position of Belarus.

In February 2022 Belarus made its territory available to the Russian Federation for aggression against Ukraine from the north, the side where the Ukrainian armed forces least expected an attack, which allowed the aggressors to approach the suburbs of Kiev on literally the second day after the war began (the civilian population had simply not had time to evacuate from here). The Russian punishers who carried out the mass murder of the peaceful Ukrainian population of the town of Bucha entered Ukraine precisely through Belarusian territory.

The Belarusian leadership was not aware in advance that there would be mass murders in Bucha when it agreed to the passage of Russian troops through its territory to attack Ukraine. This is at least some kind of "extenuating circumstance" for the official Minsk. After all, the official Kremlin propaganda claimed that it supposedly wanted "good for the people of Ukraine".

The question arises: Didn't the authorities of Kazakhstan, Turkmenistan and Azerbaijan know about the genocide in Khojaly? Did they not understand that because of their passive participation in supplying weapons to the aggressor, this genocide could be repeated? Did they not remember about more than 1m refugees from Karabakh, Azerbaijan, occupied by Armenian aggressors? And that the supply of weapons may increase the number of victims and the number of refugees?  After all, the Armenian authorities and Armenian nationalists did not even think of hiding their hatred towards Azerbaijanis.

However, it is the leadership of these countries that has allowed Armenian aggressors and occupants to receive weapons through their airspace. Moreover, even before the 44-day war there were such supplies at a critical time for Azerbaijan. We are talking about the provocation organized by Armenia in the summer of 2020 in the Tovuz direction.

In the days when fighting was taking place in Tovuz, Azerbaijan, Russian military transport aircraft were delivering modern weapons to Armenia via the airspace of Kazakhstan, Turkmenistan and Iran. A total of 280 tons of military equipment was delivered to Armenia at that time. There were seven flights: two on July 17, at the height of fighting, one on July 18, 20, 27, 29 and August 4, 2020. The Russian IL-76s flew the roundabout route Rostov-Minvody-Aktau-Turkmenbashi-Novshert-Resht-Meghri-Yerevan. The length of this route is more than 2000 km and the travel time is 3 hours 30 minutes.

Then Georgia took a principled position and did not give permission for overflight of Russian military "transports" with weapons. While it would have been more convenient and faster to deliver weapons directly through Georgia. In such case the length of the route would have been 500 km and the travel time would have been 1 hour.

Azerbaijan then expressed its concerns to Kazakhstan, Turkmenistan and Iran. Alas, this had no effect. And during the 44-day war, "transit shipments" resumed. Georgia again took a principled position and did not let weapons to occupants of foreign lands, as the President of Azerbaijan reminded today.

This example once again shows how close the friendship, good neighborliness and cooperation between Azerbaijan and Georgia is.