Put the bloodthirsty fool to rest at last! ... The threat from the Metsamor nuclear power plant 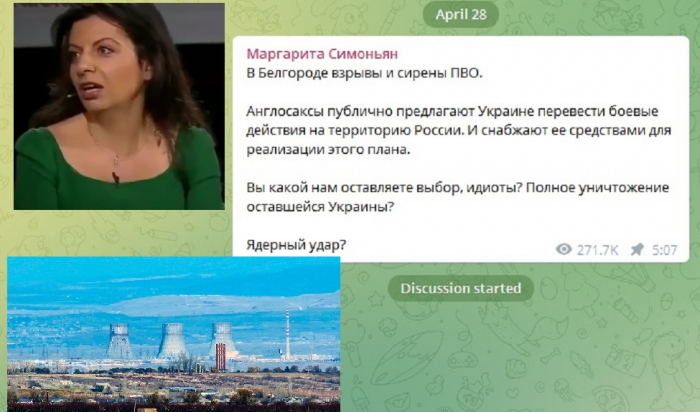 On the morning of April 28, 2022, after the information about explosions in Belgorod, bordering with Ukraine, the post of the Kremlin's main propagandist Margarita Simonyan appeared in the Telegram. The post makes us think once again what danger Metsamor nuclear power plant located in the hands of her "fellow reasoners" in Armenia may pose.

Margarita Simonyan, in fact, calls for a nuclear war against humanity:

"There are explosions and air defence sirens in Belgorod.

The Anglo-Saxons are publicly suggesting that Ukraine should move hostilities to Russian territory. And are providing it with the means to carry out this plan.

What choice do you leave us, idiots? Total annihilation of the remaining Ukraine?

Should we go in with a nuclear strike?"

The "long-suffering" Margarita Simonyan sees two choices - either the complete destruction of Ukraine with the total genocide of its population, or a nuclear war of all humanity.

One is tempted to say to the leadership of the Russian Federation - "Calm down, you bloodthirsty fool!

Here, too, we can give the RF leadership a choice - to shut up as soon as possible "the most ancient provocateurs", who are pushing mankind towards nuclear catastrophe.

Margarita Simonyan repeated the same thoughts and actual call for nuclear war on a talk-show hosted by another Kremlin propagandist Vladimir Solovyov:

It should be recalled that this is not the first time that nationalists of the "long-suffering people" and "descendants of genocide victims" have called for nuclear war. Back on 5 April 2016, Hrant Bagratyan, who was Prime Minister of Armenia from 1993 to 1996, directly proposed from the rostrum of parliament to create nuclear weapons to "protect Armenia and Karabakh from Azerbaijan".

"Armenia must create nuclear weapons. We have to defend ourselves. What if they could break through?" - Bagratyan said at the time.

Afterwards Lieutenant-General Norat Ter-Grigoryants, Chief of the General Staff of Armenian Ministry of Defense in 1992-1995, acting Defense Minister in 1993, also openly declared Armenia`s desire to obtain nuclear weapons, which he called "a weapon of terror and retaliation".

Artsrun Hovhannisyan, spokesman for the Armenian Ministry of Defence 2012-2020, also hinted at the time that along with the weapons of the 1980s, Armenia had in its arsenal some of the latest weapons "that many could not even dream of". Many took this to mean that Armenia was developing a "dirty bomb" of radioactive materials.  Not to mention the fact that Armenian terrorists have repeatedly threatened to create and use a "dirty bomb". And they directly said from where they would get materials for it from Metsamor NPP. From the very NPP, which is hopelessly outdated today and is the most dangerous man-made facility in the world, with a prohibitively high probability of accident.

For decades, radioactive materials have been illegally exported from Armenia, including via Georgia. Georgian border guards and law enforcement agencies have repeatedly detained Armenian citizens when attempting to import or sell radioactive materials on Georgian territory. There are also suspicions that the illegal export of radioactive materials from the Metsamor nuclear power plant also plays a major role in Iran's nuclear programme, which threatens stability and peace in the region.

The question arises - if Armenian politicians and military think like their compatriot Margarita Simonyan, and if Armenian nationalists directly provoke a nuclear war, then is it possible to leave such a dangerous facility as the Metsamor NPP under their control? After all, they can organize a terrorist attack there at any time, and try to build and use a "dirty bomb". Armenian terrorists may resort to "nuclear blackmail," threatening to blow up Metsamor Nuclear Power Plant. Especially since they are unable to carry out their insane ambitions with other weapons. An act of terrorism or an accident at that plant would make most of the South Caucasus, including Georgia and the surrounding areas, an uninhabitable radioactive desert.