Armenia and Russia's logistical disaster... The Zangezur corridor as a chance to diminish it 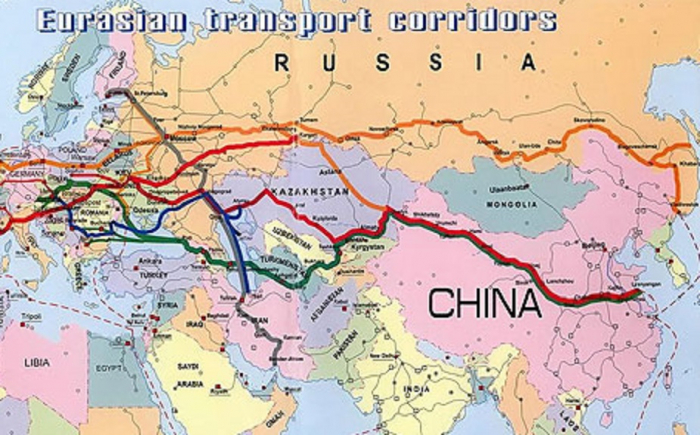 On the eve of Armenian Prime Minister Nikol Pashinyan's current visit to Moscow, the issue of the Zangezur corridor is once again being actively discussed in Yerevan. As always, revanchists and ardent Armenian nationalists are against the corridor. Forced to reckon with these sentiments, Nikol Pashinyan "played along" with them. Particularly, when asked if the idea of "Zangezour corridor", initiated by Azerbaijan, will become reality, Armenia will have a problem with its territorial integrity, he said "yes", and revanchist media interpreted it in such a way as "Pashinyan is against Zangezour corridor".

Today, almost no one doubts that the main subject of Pashinyan's visit to Russia is Zangezour corridor. Barring mad nationalists, the reality is that no sane Armenian politician can speak out against Zangezour corridor in present situation. Since it is a question of the banal survival of the Republic of Armenia.

Even if we take only the economic sphere, without the unblocking of communications, Armenia will no longer be able to exist. Armenia's economy is fully dependent on Russia, the country has no direct border with Russia, and for many years Russia has not only 'subsidised' the Armenian economy but has also borne the logistical costs of supplying a 'blockaded' ally due to its exorbitant ambitions.

Given the prohibitive costs of the war in Ukraine and the impact of sanctions, Russia no longer has the funds to subsidise Armenia. Armenia itself is no longer able to earn and simply subsist on its own.  Any goods that end up being transported via the congested road through Upper Lars are dramatically increasing in price, becoming expensive for the residents of the impoverished country. This is despite the fact that Russia, due to its international isolation after the aggression against Ukraine, is starting to have huge problems with these goods itself.

No efficient production of goods for export in a country with such logistical problems as Armenia has today is possible. In the meantime, with sanctions in place, Russia is no longer the "breadwinner" of Armenian families. Armenians who work in Russia no longer have enough money to survive in Russia, or money for more expensive air tickets to Yerevan or Gyumri.  Sending money back to their relatives in Armenia is often out of the question. Many Armenians from the Russian Federation return to Armenia to live in poverty and miserable conditions, since the unemployment problem in Armenia has become disastrous.

There is no other way out for Armenia but to unblock the border with Azerbaijan and Turkey.  But Russia, due to the sanctions imposed against it and the actual blockade, today cannot do without a full-fledged "corridor" through the South Caucasus to Turkey. In other words, for Russia, the Zangezur corridor is gradually becoming a matter of the country's survival, and this is not an exaggeration.

To begin with, the consequence of Russia's aggression against Ukraine has been a real "logistical disaster" for Russia. Land routes to the West have been blocked altogether as EU countries have imposed restrictions on the entry of Russian and Belarusian trucks, rail freight traffic through the same Poland, the Baltic states and Finland has been halted. The maritime freight traffic is also blocked. As a result, Russian ports on the Baltic Sea and the Black Sea have drastically reduced their cargo traffic.

In fact, because of the peculiar "logistical deadlock in the western direction, if no "window" is found, Russia becomes a completely non-self-independent "raw materials appendage" of China. After all, if the illusion of "equality" between Russia and China was preserved because Beijing was interested in land routes to the West through Russian territory, Russia is unable to provide these routes to its eastern partners.  And in bilateral relations, Moscow's "weight and autonomy" are sharply reduced. Today, China realises that Russia can be "pressed" and demanded raw materials for a song, and deprived of logistics capabilities, Russia will be forced to comply with the almost ultimatum conditions of its "ally".

Finally, it turns out that Azerbaijan and Turkey are becoming the "window" through which Russia can enter Europe, the Mediterranean and the Middle East.  And there is no other way to organize the cheapest and most effective railway logistics than through the Zangezur corridor.

The reality is that the Kremlin and Pashinyan's government are for Zangezur corridor, for which this corridor literally becomes "the way of life". A handful of marginal terrorists, revanchists and half-hearted "Artsakh" separatists are against it. Whether sensible people will listen to them remains to be seen.