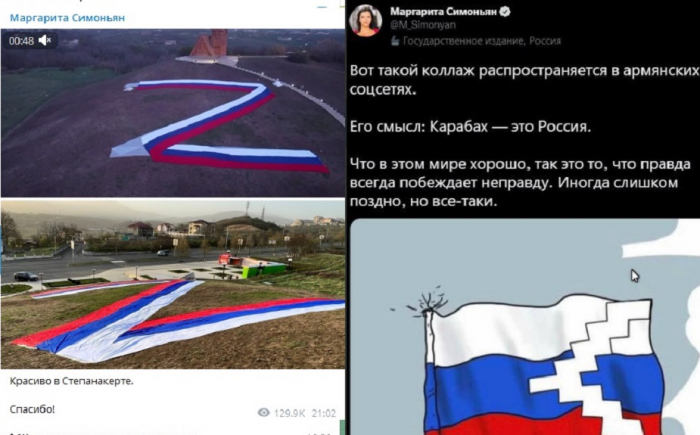 Armenian nationalists and separatists are extremely fond of all sorts of symbols. And such a symbolic act of the unscrupulous "Artsakh" separatists was their making the letter Z with Russian flags on April 13, 2022 on the background of the famous monument "us and our mountains" in the vicinity of Khankendi (Stepanakert). This symbol was immediately replicated by the main Kremlin propagandist Margarita Simonyan in her TV channel (https://t.me/margaritasimonyan/11045 ):

"It's beautiful in Stepanakert. Thank you!" - Simonyan wrote. This is despite the fact that the ominous letter and the Russian flag have now become symbols of the deaths of thousands of Ukrainian civilians.

What did the "Artsakh" separatists want to show with this symbol? That they fully support the killing of civilians in Bucha, Mariupol, Chernihiv, Izyum and other Ukrainian cities? It turns out that they did.

Furthermore, the letter Z on Azerbaijani soil is a symbol of what the separatists who are "under cover" of the Russian peacekeepers on that land are hoping for. They still hope that the Russians will fight for their interests.

Moreover, they clearly hope that the same death and destruction as in Ukraine will be brought to Azerbaijani lands by the Russian military for the sake of "great Armenia".

However, Nikol Pashinyan and his government have started to take real steps towards making peace with Azerbaijan. But this peace can only be established on the basis of respect for the territorial integrity of the two countries, which means that sooner or later Armenia will officially, finally and unconditionally recognise Karabakh as Azerbaijani territory. And no support for the separatist gangs by the authorities of the Republic of Armenia will be possible after this.

The separatists have only hope for a new Russian aggression. After all, the Russian peacekeepers should withdraw from Karabakh in a little over three years and then there will be no one to defend the separatists either.

What all the hopes of the Armenian nationalists, revanchists and "Artsakh" separatists were worth was eloquently demonstrated by the events that followed literally the same night a few hours after they had laid out the letter Z.

Overnight between 13 and 14 March 2022, Ukrainian missiles struck the flagship of the Russian Black Sea Fleet, the missile cruiser Moskva. A fire and ammunition detonation occurred on the ship. As a result, the ship was abandoned by the crew (those who survived the explosions) and sank.

The sinking of the Moskva cruiser, the one that participated in Russia's aggression against Georgia in 2008, in the annexation of Ukrainian Crimea in 2014, and during the current Russian aggression against Ukraine, which was launching missiles at Ukrainian cities, was very symbolic. It showed that Russian dominance in the Black Sea basin is coming to an end.

The praised Russian Black Sea Fleet, on which Russia's supremacy in the Black Sea basin rested, ended up being very vulnerable and easily destroyed. This is despite the fact that the very NATO against which this fleet was built and armed has not even entered the war, the ships being destroyed by the Ukrainian army. This means that no further support for separatism and redrawing of borders in the South Caucasus with the help of the same Black Sea Fleet of the Russian Federation is out of the question.

First of all, this is a "bell" for the separatists of Abkhazia and the Abkhazian Armenians who have already appropriated Georgian land - your hopes of continuing to hold other people's lands and homes under the protection of Russian military power is futile. Since this power is being destroyed before your eyes after the aggression of Russia against Ukraine was met with retaliation.

Well, the "Artsakh" separatists with their love for the letter Z follow the missile cruiser "Moscow". Especially since they have symbolically linked themselves to the aggressors.