Is the alliance of patriots in league with the "Javakhk" separatists? 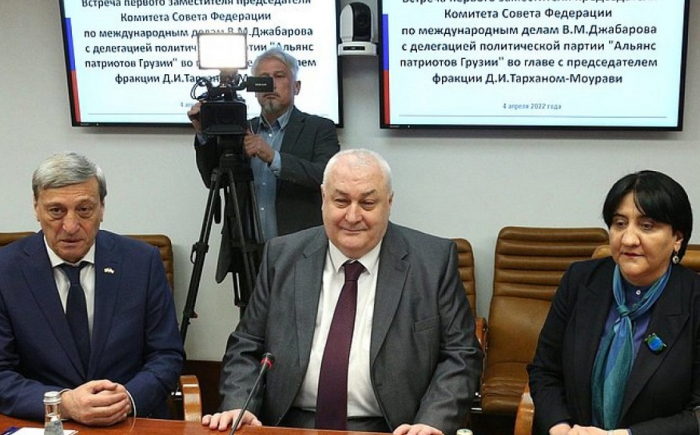 One of the most consequential enemies of the Georgian state is separatist Aghasi Arabyan and his organization " Javakhk diaspora of Russia". These separatists have settled in Moscow and with the money of the Armenian lobby and Russian security services are coordinating separatist underground in the Georgian region of Samtskhe-Javkheti.

Javakhk diaspora of Russia does not even particularly hide its purpose. Here, for example, is an extract from its "congratulations" to the separatists of the Ukrainian Crimea and Sevastopol, through whose efforts the annexation of the peninsula by Russia took place. There is a share on the conscience of these separatists in Russia's current bloody aggression against Ukraine.  On the 18 March 2022 posted on the Facebook page of the Javakhi diaspora of Russia, the anniversary of the annexation is a big celebration:

Please accept our most sincere and heartfelt congratulations on the Day of Reunification of Crimea with Russia!

Eight years ago the Crimeans spoke united against lawlessness and fascism, in defense of freedom and the right to determine their own destiny. All of multinational Russia supported the Crimean spring, supported the aspiration of Sevastopol and Crimean residents to be in unity with their homeland, their desire to return to their native harbour.

This holiday has a special meaning for our country and for every Russian! It is especially dear to the heart of every person living on the territory of the multinational Crimean peninsula!

We wish peace, happiness, confidence in the future, new achievements and prosperity within the Russian Federation!

Board of a public organization,

If we replace the word "Crimea" with "Javakhk" and Russia with "Armenia" in this greeting it immediately becomes clear what the "Javakhk diaspora of Russia" is after. These are mortal enemies of the Georgian state, who only dream of seceding their region from Georgia, ethnic cleansing of the Georgian population and annexation of native Georgian lands to Armenia with the help of the same Russia and Russian weapons.

Any Georgian politician who is in communication with these enemies of Georgia is certainly a traitor and an enemy of his country, his people.  But figures of the political party Alliance of Patriots not only communicate with separatists, but through their mediation they hold meetings with politicians of the aggressor state - Russia.  Apparently, in order to quickly "surrender" the sovereignty of Georgia to the country that occupies 20% of Georgian territory and expelled more than 300 000 Georgians from their homes.

Basically, there is nothing strange about this. "The Alliance of Patriots has long established itself as a "fifth column" in Georgia, defending the interests of exclusively Russian occupiers and the Armenian lobby. Fulfilling wishes of their Armenian "masters" the Alliance of Patriots conducts anti-Turkish and anti-Azerbaijani actions, demands recognition of the mythical "Armenian genocide" from Georgia, insists on organization of transit of goods for Armenia through occupied Abkhazia without its de-occupation and return of Georgian refugees to their homes.

Curiously, the "Alliance of Patriots" declared its willingness to surrender the interests of Georgia to Russia just on the eve of the Russian aggression against Ukraine. "The Alliance of Patriots even prepared and signed an open letter to Russian President Putin on February 20th 2022 which said in particular the following:

" Realizing that Georgia will not be able to cope with regional, let alone global challenges without cooperation with Russia, we seek close cooperation with Russia and would like to meet with the leadership of the State Duma and the Federation Council in order to make a small, but feasible contribution to the formation of an effective system of regional security ...".

And now, a month and a half after the beginning of Russia's aggression against Ukraine, after the images of the Russian occupants' horrific atrocities in Bucha were broadcast all over the world, such a meeting took place. It was "Javakhk" separatists who organized this meeting for the "fifth column" with the politicians of the occupying country.

The Alliance of Patriots held a meeting in Moscow at the Federation Council with the head of the "Javakhk Diaspora of Russia" Aghasi Arabyan. The meeting was attended by Vladimir Jabarov, Deputy Chairman of the Foreign Affairs Committee of the Russian Federation Council, and Mikhail Sinitsyn, a member of the same committee.

Vladimir Jabarov is an ethnic Armenian and one of the senior representatives of the Armenian lobby in Russia. In fact, he is one of the "Armenian hosts" of the Alliance of Patriots. And today, at the time when Russia is carrying out aggression against Ukraine, the same aggression is clearly being planned against Georgia, its dismemberment and elimination of Georgian statehood.

"Our countries are bound by centuries-old friendship, and I am convinced that there are many people in Georgia who are in favour of expanding contacts with Russia," Jabarov said at the meeting, referring, apparently, to such Georgian traitors as David Tarkhan Mouravi.

In case of occupation of Georgia, the Alliance of Patriots will clearly become the leading collaborator force that is naturally supported by separatist forces of Javakhi diaspora organization of Russia and its underground in Georgia.

Therefore, the danger of these trips and meetings of political forces such as the "Alliance of Patriots" openly working for the separatists and enemies of Georgia cannot be underestimated.