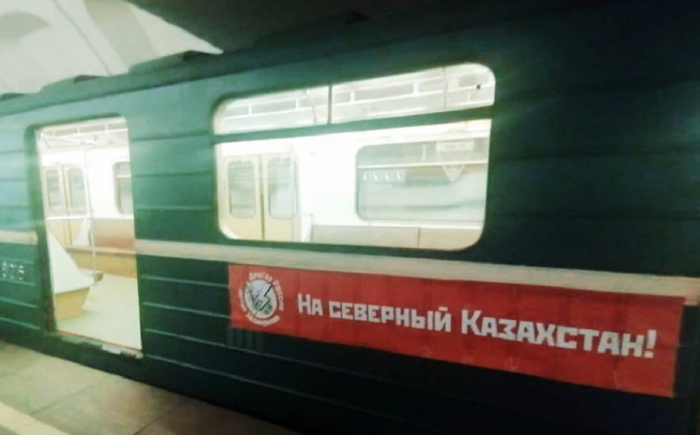 A careful analysis of open sources suggests that the Armenian lobby has been "interested" in Kazakhstan and has been plotting intrigues and provocations against it long before the current events. The pro-Armenian Russian media has long "unobtrusively" from time to time published allegations that Northern Kazakhstan is "native Russian lands" allegedly "presented to Kazakhs by Lenin and Stalin" and that "justice" should be restored and these lands should be taken away from Kazakhstan and returned to Russia.

Particular emphasis was placed on the dismemberment of Kazakhstan by the now defunct writer Eduard Limonov, who along with his so-called "National Bolshevik Movement" was funded by the Armenian lobby. At the same time Limonov admired the so-called "Artsakh", illegally visiting the occupied Azerbaijani lands of Karabakh. He said directly that it would be a good idea for Russia to use the "Armenian experience" and to seize pieces of territory from its neighbours - first and foremost, from Ukraine and Kazakhstan.

Even on the eve of his death, Eduard Limonov "willed" his comrades-in-arms to fight for Northern Kazakhstan to be annexed to Russia. And now, after the beginning of current events in Kazakhstan, on January 8, 2022 on metro station "Alma-Atinskaya" in Moscow, a few activists of unregistered party "The Other Russia" named after E. Limonov. E. Limonov" pinned a banner "For Northern Kazakhstan" to a train carriage. According to them, they tried to draw attention to "the need for decisive action on the part of the Russian authorities to protect the Russian-speaking population of Kazakhstan".

On 10 January, police raided the organisation's headquarters. The security forces detained 14 people who were in the office. The activists received 10 to 15 days of arrest. They were charged with "disobedience to police", even though a criminal case should have been opened for inciting inter-ethnic hatred. Nevertheless, it appears that Russian authorities have not yet decided to "launch" the "Artsakh" scenario so lobbied by Armenian nationalists in relation to Kazakhstan. However, the danger of this, judging by how many Russian "ura-patriots" listen to Armenian provocateurs and start to rave about "Southern Siberia" (as they call Northern Kazakhstan) similarly to the raving about Crimea before 2014, has not gone anywhere.

Obviously, attempts to create a "new" Crimea or Donbass out of Northern Kazakhstan will end up being nothing but a disaster for Russia. All the more so that in such a case Russia itself would question its eastern borders. Almost 1 million Kazakhs live on their ancestral lands along the whole Russian-Kazakh border, starting from Astrakhan oblast all the way to Altai. And it is difficult to determine where the Kazakh land "ends". To be more exact, according to historical justice, this must be determined not by Russians, but by Kazakhs and Turkic peoples who are now members of the Russian Federation, and their brotherly peoples: Astrakhan, Siberian and other Tatars, Nogays, Bashkirs, Altaians.

People who live Moreover, between Siberian Tatars and Tatars in Kazan, for example, are even more dialectal, external and everyday differences than between the same Siberian Tatars and Northern Kazakhs. Historically it was a single Turkic area. Over the centuries of cohabitation, the Kazakhs, Tatars, and the same Russians got along well together, there are a huge number of mixed families, and there is not even the slightest sign of interethnic discord. And now Armenian provocateurs are trying to stir up this discord with their projects of "Artsakhization" of northern Kazakhstan. And so-called "Russian patriots" are following their lead, not realizing that the claims to northern Kazakhstan can eventually turn into claims for Russia's partition.

After all, the precedent of separatism and redrawing of borders can be used at any time by ill-wishers of the Russian Federation.

No one, except for an outspoken, but perfectly disguised, enemy of Russia and the Russian people, will "set fire" to the external borders of their vast country. Meanwhile, the Russian Federation, firstly, is federal in its structure, and secondly, is unique in that it has a disproportionately small population compared to its vast territories and long borders.

To stir up separatist conflicts along the entire perimeter of its huge borders, to lay claim to someone else's land while the native central Russia is becoming desolate and rapidly depopulated, and there are thousands of abandoned villages - is sheer madness.